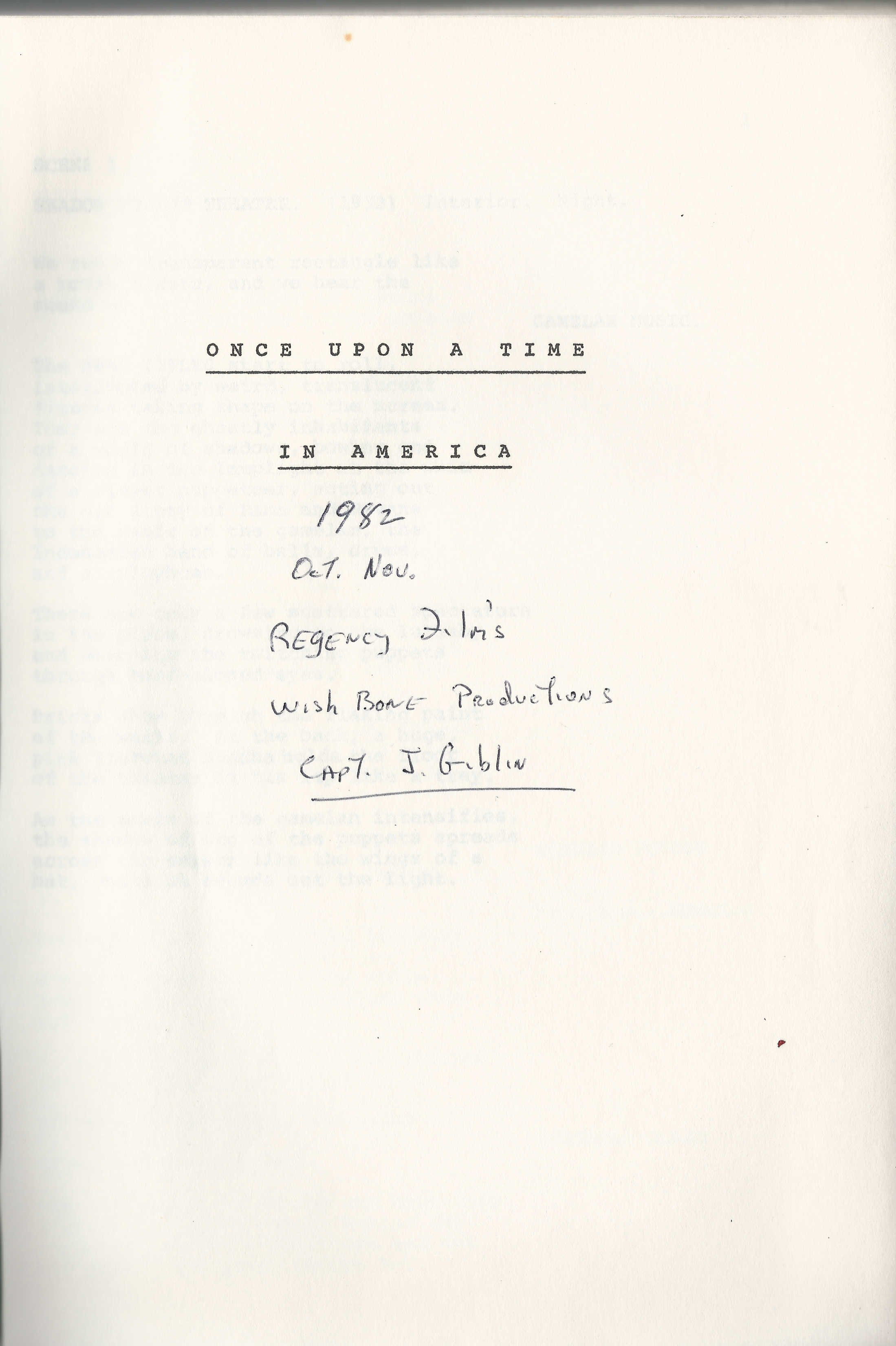 Writer/director Sergio Leone’s ONCE UPON A TIME IN AMERICA is many things. It is an epic history of organized crime as seen through the eyes of characters based on Bugsy Siegel and Meyer Lansky. It is Leone’s loving homage to the American gangster genre. It is also, like most of Leone’s significant work, a look at male friendship and betrayal.

Its literary antecedents include Fitzgerald’s THE GREAT GATSBY (Robert De Niro plays a self-made Gatsby-like character pursuing an ever-receding American dream embodied in an unobtainable woman) and Proust’s REMEMBRANCE OF THINGS PAST (the obsession with time and memory – the film cuts back and forth between 1933, the 1920s, and 1968, but since it begins and ends in a 1933 opium den, the whole story could be considered the De Niro character’s opium dream).

A dream project for filmmaker Leone, the movie was in development for roughly 16 years, from the late ‘60s (Leone turned down an offer to direct THE GODFATHER in order to work on this project) to its release in 1984, going through multiple screenplay drafts with multiple writers. Star Robert De Niro devoted a year of his life to shooting the film, and was responsible for most of the American casting. Now considered a masterpiece, the film was released in several versions over the years with running times varying from 139 minutes (the initial American release) to 251 minutes (the most recent restoration).

Leone was a director known for both his extravagant visual style and his attention to sound and music, and the format of this screenplay reflects this. The entire 264 page screenplay is divided into two columns – the left column provides a detailed description of the visuals, what we are going to see on the screen, while the right column shows the accompanying dialogue, sound effects, and significant musical cues. (This type of two-column screenplay is, in fact, a standard practice in Italian cinema.)

We can see an immediate difference between this screenplay draft and the director’s cut of the film with respect to the ordering of scenes. The film, instead of beginning with the Chinese Puppet Theater/Opium Den (as above), begins with the scene in Noodles’ Hotel Room where Eve (Darlanne Fluegel) is killed, followed by the scene in Fat Moe’s office. Only then do we cut for the first time to the Puppet Theater/Opium Den where Noodles (De Niro) is hiding out. However, the scenes themselves are filmed almost exactly as described in the screenplay’s visual column.

This screenplay draft also contains scenes that have not appeared in any released cut of the film to date, for example, “Scene 26 – SYNAGOGUE (1968) Interior. Day.” wherein Noodles asks some Rabbis in a Synagogue about a letter he received concerning the reinterment of his deceased friends, which it turns out the Synagogue did not send. Given that Leone’s original cut of the film was 6 hours long, this scene was probably shot but not ultimately used. Another scene involving young Noodles’ mother, father, and little brother is omitted – along with several others. The screenplay also makes clearer some things that are only slightly hinted at in the film, for example, that the character of Fat Moe (Larry Rapp) is gay, and later, that the escalating craziness of Max (James Woods) is caused in part by syphillis.

One substantial difference between this draft and the completed film is the way the first transition from 1933 to 1968 is shot. In the screenplay, Noodles hitches a ride from a truck driver (DRIVER: Where you going? NOODLES: Where you’re going), and there is a dissolve from 1933 traffic to the passing traffic of 1968. In the film, Noodles buys a ticket in a bus station to the first bus out of town, and we dissolve from a 1933 wall mural to the same bus station wall with a different mural in 1968 (the face of an older Noodles reflected in the wall’s mirrored door) while on the soundtrack we hear a Muzak version of Lennon and McCartney’s “Yesterday.”

One scene in the screenplay that is significantly expanded in the film is the scene where Max introduces Noodles to a pair of Italian gangsters played by Joe Pesci and Burt Young. In the movie, Burt Young’s character, Joe is given a lengthy monologue about “pussy insurance” which begins and ends with the line, “Life is funnier than shit.” The monologue not only gives 6th-billed star Burt Young something interesting to do, but also prepares us for the first significant appearance of Tuesday Weld’s character, Carol. The whole scene, in which the Jewish characters played by De Niro and Woods form an alliance with Italian gangsters, reflects the historical inspiration for the film – the rise of Jewish gangsters Bugsy Siegel and Meyer Lansky and their alliance with the Mafia, Lucky Luciano and others, to form the national crime organization known as the Syndicate. In subsequent scenes, we will see how the newly formed Syndicate allies itself with a Union organizer played by Treat Williams – the film’s fictional equivalent of the real-life Jimmy Hoffa and his Teamsters.

At the heart of the film is the three-way relationship between Noodles, Deborah (Elizabeth McGovern), and Max. Noodles loves Deborah and Max, and both of them love Noodles in their respective ways. But Noodles stands in the way of Deborah’s ambition, just as he stands in the way of Max’s even more massive ambition, and, as a result, they both betray Noodles. But Noodles also betrays Deborah when he rapes her, and he betrays Max when he informs the police concerning Max’s last bank job. The three of them achieve everything they aspire to in the way of worldly success, but the end result – and predominant emotion of the film – is overwhelming regret.

The screenplay of ONCE UPON A TIME IN AMERICA is a lesson in how to write an epic film narrative, a screenplay that illuminates the film for which it is the blueprint. Anyone interested in Leone’s complete vision of this genre classic will find it here.