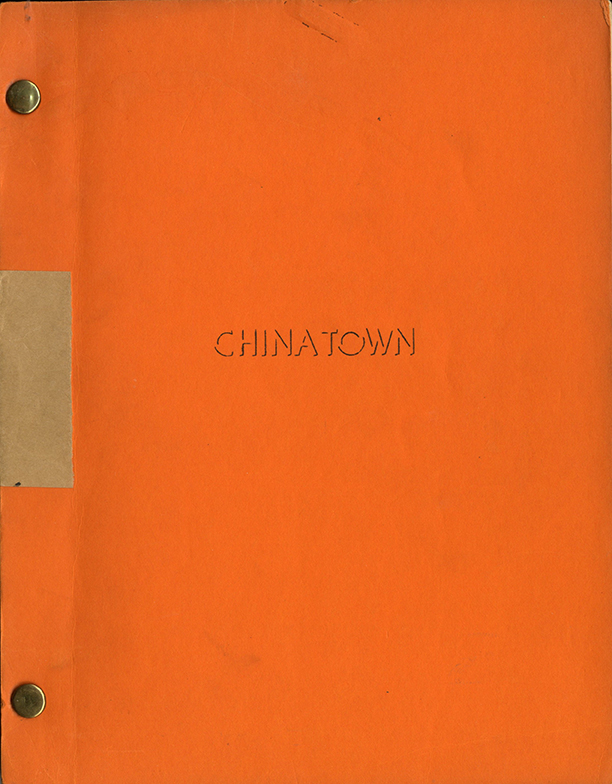 Boldy SIGNED by actors Faye Dunaway and Diane Ladd, and screenwriter Robert Towne, on the title page in holograph ink. Brief notations in holograph ink on a few pages. An impeccable set of signatures on a remarkably scarce script, one of only two we’ve handled.

Towne won an Oscar for his original screenplay, and the film was nominated for ten more Academy Awards.

Almost all of the great American private eye films – THE MALTESE FALCON, MURDER MY SWEET, THE BIG SLEEP, OUT OF THE PAST, KISS ME DEADLY – are adapted from preexisting works, with one outstanding exception: 1974’s CHINATOWN, based on an original screenplay by Robert Towne that is a masterpiece of narrative construction, meta-history, and myth.

Which is not to say that CHINATOWN was unprecedented. It owes something to all of the classic film noirs mentioned above as well as Alfred Hitchcock’s masterpiece, VERTIGO. As in VERTIGO, CHINATOWN’s plot is set in motion when its private eye protagonist, Jake Gittes (played by Jack Nicholson), is introduced to a purportedly married woman who is, in fact, an imposter playing the role of that woman. As in VERTIGO, CHINATOWN’s private detective spends most of the film’s first act tailing a person of interest. Both films end tragically with the deaths of their female leads.

Both VERTIGO and CHINATOWN are valentines to the California cities in which they take place. VERTIGO is one of the definitive San Francisco films. CHINATOWN is one of the definitive L.A. films. Both films draw on the histories of their respective cities. VERTIGO is filled with references to the Spanish missions of San Francisco’s early days. CHINATOWN, which takes place in the 1930s, draws on the history of William Mulholland, the first superintendent of the Los Angeles Water Department, and the chicanery involved in bringing water to Los Angeles and the San Fernando Valley.

One of the distinguishing features of Towne’s script is the density of its poetic imagery, in particular its pervasive water imagery. There is some kind of reference to water in virtually every scene. (CHINATOWN is not the first Towne script to employ this technique. There is a similar density of imagery in Towne’s 1964 screenplay for Roger Corman’s THE TOMB OF LIGEIA.)

Water, in turn, suggests glass, as in the Japanese gardener’s statement to Gittes that the water in the pond outside Evelyn Mulwray’s house is “bad for glass” (bad for grass). Glass, in turn, suggests glasses – the fact that Evelyn’s husband, Hollis, wears glasses is heavily emphasized, and a pair of glasses found at the bottom of the Mulwray pond is a key to identifying Hollis’s murderer. Glasses, in turn, suggest eyes. In one scene, Gittes notes a flaw in the iris of one of Evelyn’s (Faye Dunaway’s) eyes, and this foreshadows her death at the film’s conclusion – shot through that same eye.

Related to the eye imagery, photographs are a recurring image. The movie opens with a close-up of a photograph, the film’s villain is introduced, partially obscured, in a photograph, and later, a photograph firmly establishes a connection between the villain and the murdered Hollis Mulwray. Another major plot point involves photographs of Hollis and his purported mistress published in a newspaper.

What’s in a Name

In this draft, the name of the principal villain (John Huston’s character), is Julian Cross, but the first name “Julian” has been crossed out (most likely by Towne himself) and replaced by the hand-printed name “Justin” wherever it appears. The word “cross” has a dual poetic significance. On the one hand, it suggests death. On the other hand, given the initials J.C., Cross seems like a mischievous reference to Jesus Christ.

In the film, John Huston’s character is named Noah Cross. This, as Andrew Sarris pointed out, manages to reference both the New and Old Testaments, suggesting an Old Testament patriarch. Further, the name reinforces the film’s water imagery (Noah and the flood) while simultaneously referencing Huston’s film career (Huston played Noah in the 1966 film, THE BIBLE: IN THE BEGINNING, which he also directed).

Differences Between 9/7/73 Screenplay Draft and Film

The 9/7/73 screenplay has essentially the same scene-by-scene structure as the released film – although some of the dialogue, and even some entire scenes, have been eliminated in order to streamline the narrative.

Notably, in the first scene which introduces Jake Gittes and his client, Curly (Burt Young), there is a section, not in the film, where Curly plays with the idea of killing his unfaithful wife. Jake, naturally, discourages the idea, noting that, “You gotta be rich to kill somebody, anybody, and get away with it” – a line that may have been a little bit too on-the-nose, since it plainly states one of the movie’s major themes.

A deleted scene explains why police Lieutenant Lou Escobar is antagonistic toward the murdered Hollis Mulwray. He blames Mulwray for the collapse of a dam which killed hundreds of Mexican-Americans, his people.

While the dialogue of the movie is colorful, memorable, and frequently profane (e.g., the “Chinaman” joke), the screenplay is even more profane. For example, in the screenplay, Jake says that as a result of a potential lawsuit, he and his operatives could be so rich, “we’ll be pissing on ice for the rest of our lives.”  In the screenplay – but not in the film – when Jake first meets Cross at his riding club, Cross points to some manure and comments, “Horseshit. Love the smell of it,” and then proceeds to discuss the topic in even more detail.

There is a scene not in the film where a pilot flying Jake in a small plane talks about Cross’s runaway daughter, “Rumor was she was knocked up.”  In another deleted scene taking place in an orchard, Jake talks with a professional rainmaker (a “precipitator”).

The ending of the screenplay is bleak. The ending of the film, at the insistence of director Roman Polanski, is even bleaker. In both screenplay and film, Evelyn Mulwray is shot by the police while attempting to flee from the father who sexually abused her. However, in the screenplay, Evelyn’s sister/daughter, Katherine, manages to escape, driven away from the scene by Jake’s client, Curly. In the film, she is present at the story’s conclusion, heart-breakingly delivered into the custody of her wealthy, clutching, psychopathic father. And both screenplay and film end with the same immortal line, “Forget it, Jake. It’s Chinatown.”