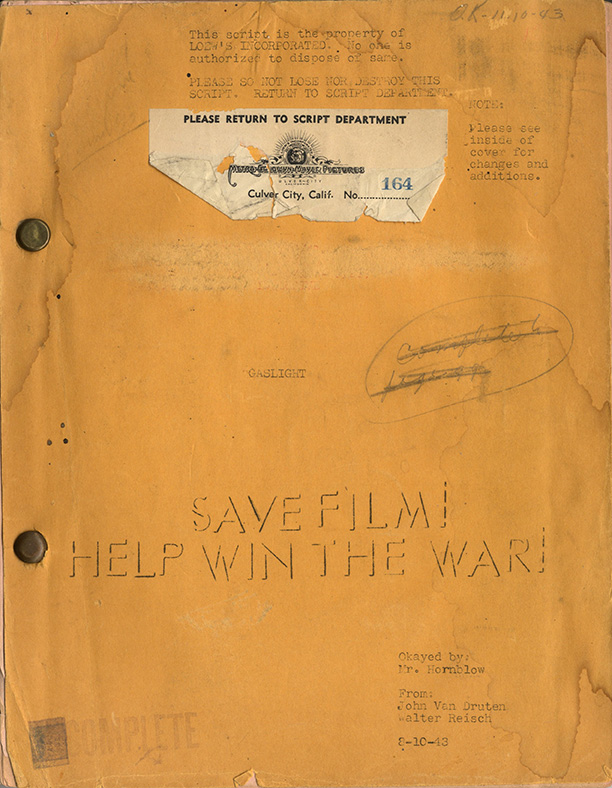 Vintage original script, orange printed wrappers, rubber-stamped as COMPLETE on the front wrapper, dated 8-10-43 with credits for screenwriters Druten and Reisch. Some dated notations on the verso of front wrapper. Title page present. 125 leaves, mimeograph, with pink and white revision pages throughout, dated variously between 5-10-43 and 11-16-43. Pages near fine, wrapper good to very good, with some minor dampstaining, some wear and creasing to the MGM title label and moderate wear to the extremities, bound with two gold brads.

A rare example of a remake that stands taller–and is even better remembered–than its predecessor. With the success of the first film adaptation of Patrick Hamilton’s play in the UK (Thorold Dickinson, 1940), MGM set about to make a dark gothic version of its own, mixing the transatlantic, metrosexual qualities of Charles Boyer with those of an American female lead (Ingrid Bergman). Winner of two Academy Awards, including Best Actress, and nominated for five others, including Best Picture and Best Screenplay.

Adapted from the 1938 play by Patrick Hamilton, MGM’s 1944 version of GASLIGHT tells the story of a dysfunctional marriage in which the husband Gregory (Charles Boyer) pretends to be kind and loving, but is actually doing everything he can to drive his wife Paula (Ingrid Bergman) insane. Taking place in Victorian London, GASLIGHT has been characterized as a “period noir.” Its director, George Cukor – though known mainly as a “women’s director” – was responsible for at least three other classic ‘40s noirs, A WOMAN’S FACE (1941), KEEPER OF THE FLAME (1943), and A DOUBLE LIFE (1944). Its star, Ingrid Bergman, won an Academy Award for her performance.

GASLIGHT’s principal screenwriter, John Van Druten, was a playwright for the English and American stage whose successful theater works include THE VOICE OF THE TURTLE, OLD ACQUAINTANCE, I REMEMBER MAMA, BELL BOOK AND CANDLE, and I AM A CAMERA, all of which were eventually made into movies. Each of these plays, like GASLIGHT, centers around one or more complex female characters. Harbin, Marra, and Schanke, pp. 356-7: “Living in an era when his sexual orientation, if known, would have ruined his hopes of commercial success, Van Druten, a lifelong bachelor, veiled his homosexuality behind…strong but troubled women characters.”

His co-writer, Walter Reisch, was an extremely prolific screenwriter whose other credits or co-credits include such woman-centered projects as NINOTCHKA, THAT HAMILTON WOMAN, THE MATING SEASON, THE MODEL AND THE MARRIAGE BROKER (for Cukor), NIAGARA, and THE GIRL IN THE RED VELVET SWING.

Robin Wood, in his seminal essay, “The Two Gaslights” (SEXUAL POLITICS AND NARRATIVE FILM, Columbia University Press, 1998) points out significant differences between the 1940 British film adaption of GASLIGHT directed by Thorald Dickinson, and the 1944 Hollywood version directed by Cukor.

The British version is more faithful to the spirit and letter of Patrick Hamilton’s original stage play. Wood describes it as a “study of Victorian social/sexual relations, and in particular the social conditioning of the submissive Victorian wife who must never allow herself to question the behavior and activities of her husband, about whom she was supposed not even to have any curiosity.” The motivation of the husband is simple greed – he wants to drive his wife mad in order to obtain her money and property.

The “thoroughly rethought” Hollywood version has been freudianized by the writers, “anticipating many of the insights into male sexual anxieties that have been developed since the advent of 1960s feminism.” With respect to the wife, Paula, the film is a study of the romantic lover who “does not fall in love with a human being but with an ideal image that is at once narcissistic and compensatory: any disturbing personality traits or defects that appear to threaten the ‘reality’ of this image must be blotted out ….” Hence, we see Paula in perpetual denial of the obvious ways her husband is manipulating her.

Gregory, the husband, unlike his counterpart in the British version, does not understand his own (unconscious) motivations. As he ultimately admits, he is obsessed with and wants to possess the jewels that formerly belonged to Paula’s opera star aunt, but he does not know why. They are too famous for him to sell. The opera star aunt, whom he murdered ten years earlier was a beautiful confident woman who rejected him. (Unlike the British version in which the murdered woman was a “simple old woman devoid of charisma or sexual attractiveness.”) The jewels in the Hollywood version are a symbol of the murdered opera star’s power, and Gregory’s efforts to destroy Paula – the opera star’s niece and double – are “the vengeance of the humiliated male ego against the empowered woman.”

This is most likely the final or near-final draft of the shooting script, indicating in several places that a scene has been “already shot.” The script is quite close to the released film. It is detailed and heavily descriptive, explaining exactly how each scene is to be photographed. However, director Cukor appears to have disregarded most of the description, which is to say that Cukor is faithful to what happens in each scene, but not to how the script dictates that it should be shot.

It appears that several scenes were rewritten during the course of shooting. Some dialogue has been cut. In the film, the role of the maidservant, Nancy, played by Angela Lansbury has been beefed up to show off the young starlet (a Van Druten discovery) making her film debut. Gregory’s final monologue about the jewels has been expanded. Moreover, the movie’s ending is significantly different than in this script (most likely reshot). In the script, the last scene between Paula and the handsome Scotland Yard detective (Joseph Cotten) takes place in the house’s drawing room, Paula reveals that her opera star aunt was actually her mother, the detective asks Paula if she will be leaving the house, and Paula says that she will remain. The film’s final scene is much more romantic, taking place on the house’s roof underneath a moonlit sky, there is no mention of the aunt being Paula’s real mother, the detective asks Paula if he might visit her from time to time, and she coyly agrees that he may.