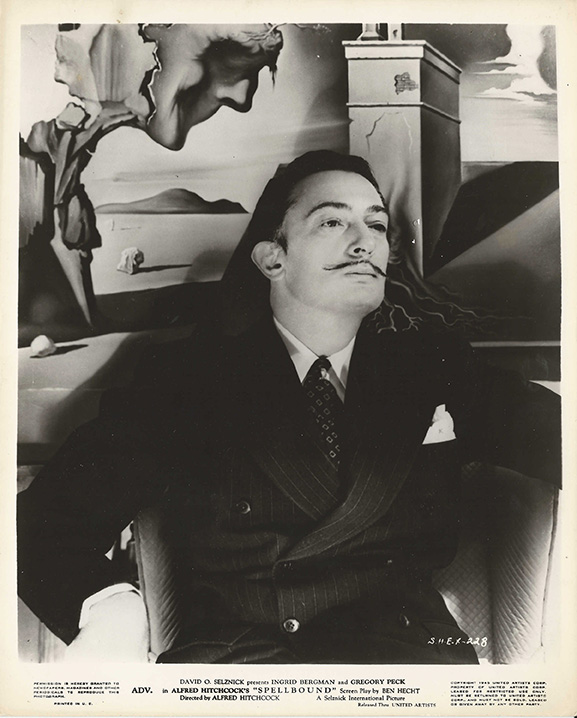 SALVADOR DALI AND HIS SET FOR HITCHCOCK’S SPELLBOUND (1945)

Vintage original 10 x 8” (25 x 20 cm.) black and white single weight glossy silver gelatin print still photo, USA. Ingrid Bergman, GregoryPeck, Michael Chekhov, Leo G. Carroll, Rhonda Fleming, Norman Lloyd, dir: Alfred Hitchcock. Selznick/United Artists. A man suffering from amnesia is revealed as an imposter when the doctor whose place he has taken at a mental hospital is found dead. A woman psychiatrist at the hospital who has fallen in love with him, works with him to discover who he really is and to find out what happened to the deceased physician. One of the earlier films to explore the area of psychoanalysis and brought to the screen with brilliant suspense and creativity by masters of their craft, including producer Selznick (who had a big interest in the subject), writer Ben Hecht, composer Miklos Rozsa (Academy Award winner) and director Hitchcock. There was a best picture nomination too. Notorious and haunting was one of the most bizarre dream sequences every staged for film. The interpretation of the dream which leads to Gregory Peck’s character recovery was art directed and designed by no other than surrealist painter Salvador Dali. This portrait of Dali is of him against a portion of the painted backdrop. The extravagant sequence was planned to run much longer than in the finished film and was the sets were built at Monogram Studios and directed by designer William Cameron Menzies. Minor tanning along the top edge. Full copyright information along bottom margin and a July 1946 ink date stamp on the verso. NEAR FINE.