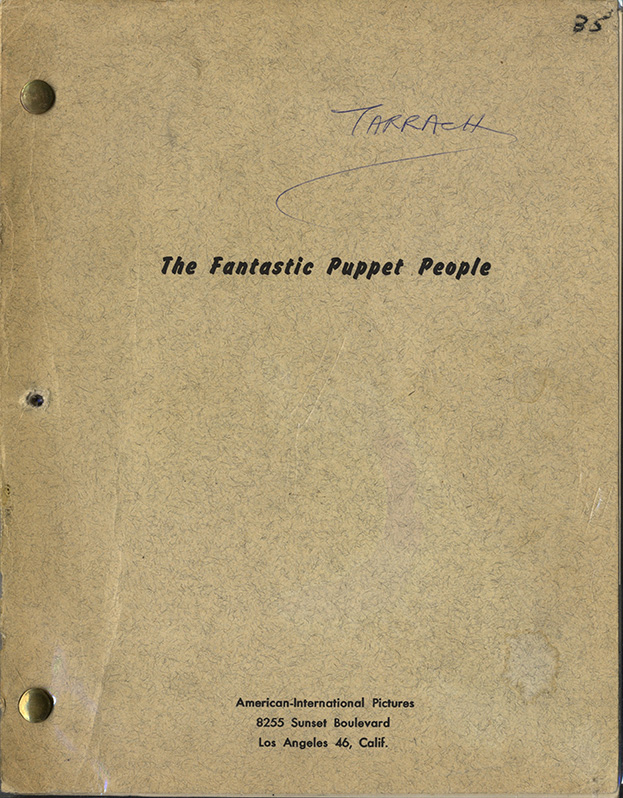 ATTACK OF THE PUPPET PEOPLE (1958) [under working title THE FANTASTIC PUPPET PEOPLE] signed by Bert I. Gordon

Actor John Hoyt stars as Mr. Franz, a lonely doll maker driven to extremes in his search for companionship. Vintage original script for a cult favorite among 1950s B-picture enthusiasts, and noted for its innovative special effects.

If, as many people believe, ATTACK OF THE PUPPET PEOPLE is drive-in auteur Bert I. Gordon’s best film, there are two principal reasons: (1) a solid screenplay by veteran screenwriter George Worthing Yates, and (2) the committed performance of John Hoyt as puppet master “Mr. Franz.”

The films of producer/director Bert I. Gordon are singularly concerned with size. Either due to personal obsession or because he had found a successful formula – or maybe both – the majority of Gordon’s films feature unnaturally large creatures of one kind or another. (Gordon’s nickname for himself was “Mr. B.I.G.”) Thus, Gordon’s first film KING DINOSAUR is about giant lizards; THE CYCLOPS, THE AMAZING COLOSSAL MAN, WAR OF THE COLOSSAL BEAST, and VILLAGE OF THE GIANTS are about giant humans; BEGINNING OF THE END is about giant grasshoppers; EARTH VS. THE SPIDER concerns a giant spider; EMPIRE OF THE ANTS is about giant ants; and THE FOOD OF THE GODS features giant chickens, wasps, and rats. Reversing Gordon’s usual formula, ATTACK OF THE PUPPET PEOPLE is about people who are shrunken to the size of puppets or dolls.

ATTACK OF THE PUPPET PEOPLE is also significantly richer in subtext than the usual Gordon film. The doll maker/puppet master Mr Franz (John Hoyt) who performs the shrinking is not your typical gloating mad scientist type. His demeanor is kindly and paternal – which gives a clue as to what the film is really about, i.e., his paternal manner suggests an over-controlling parent who is killing his “children” with kindness. His motivation for shrinking people is loneliness – he shrinks his employees and others when he fears they are going to leave him, like a parent afraid of letting his children leave the nest. The relationship of Mr. Franz to his living “dolls” also suggests the relationship of a director to his actors. He even makes them perform little shows for him.

From the viewpoint of Mr. Franz, his dolls should be grateful for the life he provides:

“Think – no daily grind, no budget problems, no taxes, debts or family to support. I see to everything. And it’s never dull. You sleep away the long, boring hours in your jars. When I take you out and wake you, it’s only to have fun, to enjoy some new treat I’ve thought up for you.”

The movie follows the script almost line for line and shot for shot – although a sub-plot involving Mr. Franz making death masks for a mortuary has been jettisoned. While some dialogue and business has been cut from the screenplay to streamline the story, there are relatively few major changes. A scene involving a mechanized miniature house has been eliminated, most likely because of the additional special effects work it would require.

The most dramatic change from script to screen is the film’s conclusion. In the script, Bob and Sally’s escape attempt is unsuccessful. Mr. Franz catches the little people and puts them back in their jars. However, a little girl has tipped off a police officer regarding what Mr. Franz is up to (the officer was investigating the disappearance of some of the people shrunken by Mr. Franz), and we hear the sound of a siren over the last shot of Mr. Franz and his dolls indicating that he will soon be apprehended.

In the movie, Bob and Sally successfully make it back to the reducing/enlarging machine before Mr. Franz does. They manage to enlarge themselves and escape the doll shop, leaving the old man isolated in his office. “Don’t leave me, I’ll be alone,” he moans pathetically, and the end credits roll.