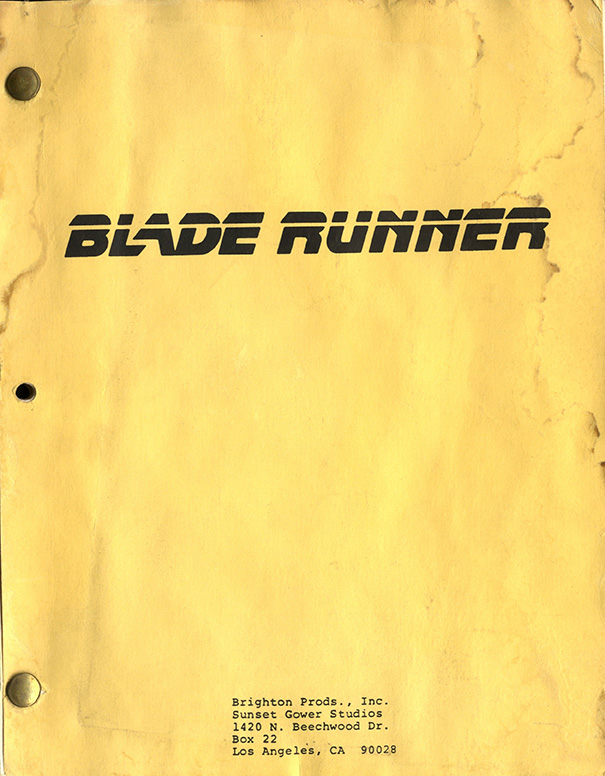 4to, printed wrappers, brad bound, there is some damp staining, resulting in light rippling to preliminary pages, 142 leaves with last page numbered 140. Near fine in very good wrappers.

The movie, BLADE RUNNER, was based on a Philip K. Dick novel, DO ANDROIDS DREAM OF ELECTRIC SHEEP?, that was published in 1968. One of the first filmmakers to express interest in adapting the book was Martin Scorsese. The novel describes a world where animals are virtually extinct, replaced by robot simulacra. Considering Scorsese’s interests, a Scorsese adaptation would very likely have emphasized the world’s post-apocalyptic religion, Mercerism, and its messianic leader, Wilbur Mercer, an aspect of the novel that was completely eliminated from the movie we have. The protagonist of both the book and the film is Rick Deckard, a bounty hunter who kills renegade androids, referred to in the film as “replicants.”

The first screenplay adaptation of the book was the work of actor/writer Hampton Fancher, optioned by producer Michael Deeley in 1977. Dick, who read one of the early drafts, was publicly critical of Fancher’s work, likening it to a robot shoot-em-up that drained the story of most of its meaning. Director Ridley Scott was hired in 1980, bringing in his own screenwriter, David Peoples.

This screenplay, uncredited, but dated December 22, 1980, is almost certainly the work of David Peoples – who later went on to write the screenplays of Clint Eastwood’s UNFORGIVEN and Terry Gilliam’s 12 MONKEYS. It is very close to the released film version, with the same basic scene structure and most of the film’s best lines of dialogue.

In this 1980 draft, Deckard is hired to hunt down and “retire” six renegade replicants –Hodge, Mary, Leon, Zohra, Pris, and Roy Batty. Neither Hodge nor Mary appears in the film version. It includes two scenes in a hospital with the blade runner, Holden, who is shot by renegade Leon in the film’s opening. At least one of these hospital scenes was shot but not used in any of the principal film versions (the 1982 original release, the 1992 so-called “Director’s Cut,” and the 2007 Ridley Scott-supervised “Final Cut”).

One of the most significant differences between this 1980 screenplay draft and the released film versions is the character of Gaff. In the screenplay, he is an annoying juvenile sidekick. In the film, Gaff is a seasoned professional, enigmatically played by Edward James Olmos, who doesn’t speak a word of English until the story’s conclusion. The film’s Gaff also has a habit of creating tiny origami figures (not in the screenplay) which in the 1992 and 2007 releases are the means by which Gaff reveals to Deckard that Deckard himself is a replicant. There is no hint in the 1982 film version that Deckard is a replicant, but that concept is fully present in the 1980 screenplay, providing it with a twist ending.

The endings of the 1980 screenplay, the 1982 film release, and the 1992 and 2007 recuts are all somewhat different. The film versions flesh out the screenplay with significant details, for example, in the film (but not the screenplay) the apartment of J.F. Sebastian is filled with toy-like robot “friends” that Sebastian has created to keep himself company. In the film (but not the screenplay) the replicant Rachael cries real tears when she learns of her replicant identity, the replicants Pris and Roy Batty have an obvious sexual relationship, Pris performs acrobatics, and Batty quotes Blake.

The 1980 screenplay uses a good deal of voiceover, making things explicit that a director like Ridley Scott would prefer to merely suggest with his visuals. Ironically, after Scott completed his first cut – without any voiceover – the studio elected to overlay it with a voiceover written by an uncredited Roland Kibbee.