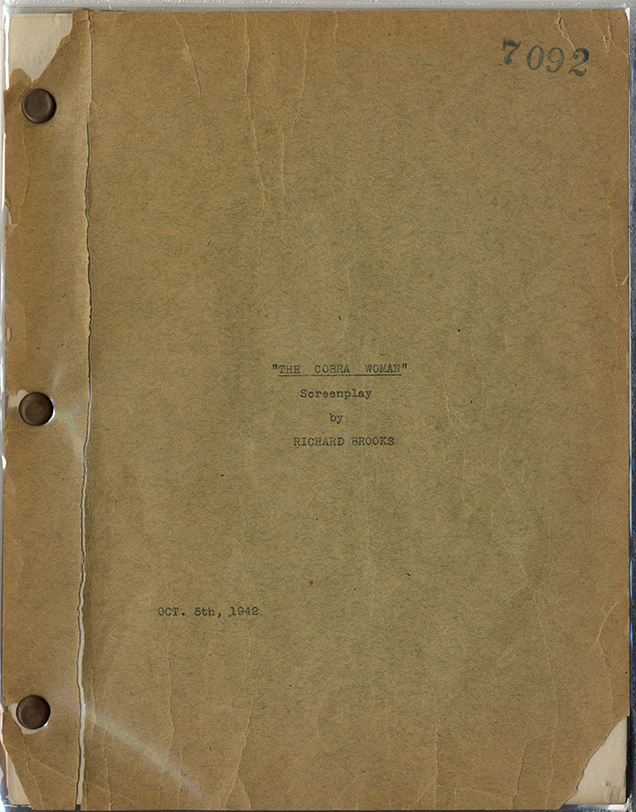 A missionary named Tollea (Montez) is abducted to Cobra Island, where her evil twin Naja (also Montez) rules the island and makes human sacrifices. Tollea’s fiancee Ramu (Hall) hears of the kidnapping, so he and his friend Kado (Sabu) set out to rescue her, unaware of the island queen’s plans. The film also starred Jon Hall and Lon Chaney, Jr. Robert Siodmak directed.

Siodmak’s third credit with Universal, a bizarre fantasy/horror film. He would go to to direct “Christmas Holiday” (1944), and the films noirs “The Suspect” (1944) and “The Strange Affair of Uncle Harry” (1944), all for Universal, and the beginning of a successful career with the studio and its subsidiary, Universal International. Weaver and Brunas, Universal Horrors. Weldon 1983.

Richard Brooks, nee Reuben Dax, had his first Hollywood screenplay produced in 1942 and directed his last movie in 1985. In between, he was responsible for writing or co-writing the screenplays of such films as BRUTE FORCE, KEY LARGO, MYSTERY STREET, and STORM WARNING, and directing, as well as writing the screen adaptations of, films like THE BLACKBOARD JUNGLE, CAT ON A HOT TIN ROOF, ELMER GANTRY, LORD JIM, THE PROFESSIONALS, IN COLD BLOOD, and LOOKING FOR MR. GOODBAR.

COBRA WOMAN, released by Universal Pictures in 1944, may have seemed like just another B-movie assignment for writer Brooks and director Robert Siodmak, but two years later the same studio released THE KILLERS (1946), also co-written by Brooks and directed by Siodmak, which was considered a prestigious literary adaptation at the time (based on a short story by Ernest Hemingway) and is now seen as one of the definitive classics of ‘40s film noir.

As for COBRA WOMAN, starring Dominican bombshell Maria Montez as twins – one good, one evil – this Technicolor Orientalist fantasy is today considered a “camp classic,” cited as one of the favorite movies of underground LGBTQ filmmakers Kenneth Anger and Jack Smith (who worked with a trans performer who went by the stage name of Mario Montez).

Interestingly, COBRA WOMAN foreshadows future works by both Siodmak and Brooks. Siodmak would return to the theme of good and evil twin sisters in THE DARK MIRROR (1946) starring Olivia de Havilland. In COBRA WOMAN, the evil twin, Naja, is the High Priestess of a cobra cult. Brooks would tell the story of another charismatic female cult leader (Jean Simmons as Sister Sharon) in ELMER GANTRY (1960). ,

This screenplay draft is credited solely to Richard Brooks. The credits on the released film are: Screenplay by Gene Lewis and Richard Brooks; Original Story W. Scott Darling. This suggests substantial differences between the Brooks draft and the completed film, and there are.

Even the characters’ names have been changed. Brooks’ draft describes three principal characters and the stars who will play them: Salim, the hero (to be played by Jon Hall), Po Tan, the good twin/heroine (to be played by Maria Montez), and Moa, the hero’s little brother (to be played by Sabu). In the film, Hall’s character is named Ramu, Montez’s good twin is named Tollea, and Sabu’s character – no longer a little brother, but a “pal” – is named Kado. In the Brooks draft, Montez’s evil twin character is referred to as either Ma Pya or Naja – sometimes on the same page! In the movie, she is simply Naja.

In the Brooks draft, there is no mention of Hava, the character played by Lon Chaney, Jr., who is a loyal servant of the powerless Queen (Mary Nash), the twins’ grandmother. The person responsible for the creation and inclusion of Chaney’s character was most likely producer George Waggner, who had a hand in several films produced at Universal during the ‘40s in which Chaney starred. It was Waggner who produced and directed THE WOLF MAN (1941), Chaney’s signature vehicle. Waggner was also producer and/or director and/or writer of such Chaney films as MAN MADE MONSTER (1941), THE GHOST OF FRANKENSTEIN (1942), and FRANKENSTEIN MEETS THE WOLF MAN (1943).

Thus, while the Brooks draft begins with the wedding of Salim (Hall) and Po Tan (Montez), the movie begins with the introduction of Chaney’s character, Hava, masquerading as a blind flute player who is met on the outskirts of the village by Kado (Sabu).

Among some of the other significant changes – In the Brooks draft, the sacred cobra dance is performed by a young female acolyte who is killed by the cobra. In the movie, the cobra dance – easily the film’s highlight – is performed by High Priestess Naja (Montez) herself. The movie also gives Naja a partner in evil, Prime Minister Martok (Edgar Barrier), who does not appear in Brooks’ draft.

The Brooks draft is intensely descriptive, 134 pages of mostly single-spaced type, remarkable for a film that would ultimately be a brief 71 minutes long. Brooks also includes some asides critical of the prior screen treatment. For example, he is critical of the treatment’s inclusion of a “monkey” character (actually a chimpanzee), and suggests that the “monkey” be replaced by a trained raven. The movie – disregarding Brooks’ suggestion – features the chimpanzee quite prominently.

Another Brooks aside indicates that he wishes to draw certain parallels between the cobra people and the “totalitarian governments of today . . . . It puts our story on a bigger canvas.”

Montez’s most famous line, “Geev me the cobra jewel,” does not appear in Brooks’ draft. Nor does the cobra jewel. In Brooks’ draft, unlike the movie, the cobra people’s entire island, including its High Priestess, is destroyed by an angry volcano. Robert Siodmak directed this cult classic the same year as he also helmed two definitive masterpieces of film noir, PHANTOM LADY and CHRISTMAS HOLIDAY.