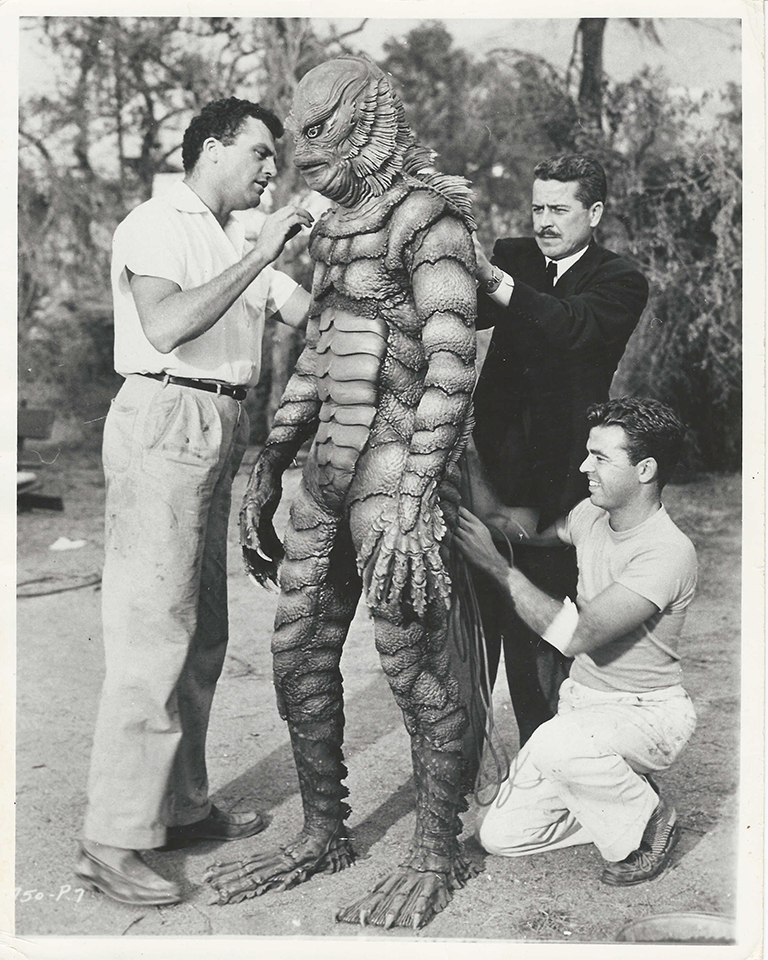 CREATURE FROM THE BLACK LAGOON, THE-JACK KEVAN AND TEAM (1954)

Vintage original 8 x 10 (20 x 25 cm.) black and white double weight glossy silver gelatin print still photo, USA. Richard Carlson, Julie Adams, Richard Denning, Antonio Moreno, Ricou Bronwing, Ben Chapman, dir: Jack Arnold: Universal. Here are make- up man Jack Kevan and team preparing the 6′ 5″ Ben Chapman during the filming of the movie. Ben Chapman was born in Oakland, California, while his Tahitian parents were on a trip to the United States. He was raised in Tahiti, relocated to the U.S. in 1940 and went to school in the Bay Area of San Francisco. Working as a Tahitian dancer in nightclubs led to his first movie job, a bit in MGM’s “Pagan Love Song” (1950); other small film roles followed before Korean War duty temporarily sidetracked his modest screen career. Talent scouts from Universal-International “discovered” Chapman upon his return, and for a year he became a U-I stock player–and, at six-foot-five, an ideal choice for the finny title role in Jack Arnold’s Creature from the Black Lagoon. Chapman played the creature in all scenes while on land while Ricou Browning, a much smaller actor played the role in the water scenes. The costumes were distinctly different particularly in the treatment of the torso section and the head. Though Kevan created a design for the creature, his was not used and uncredited Milicent Patrick is believed to have been the true designer. A classic of the 1950’s horror/monster genre. Photo is coded 750-P-7. Minor creasing at bottom margin and top right corner. ABOUT FINE.