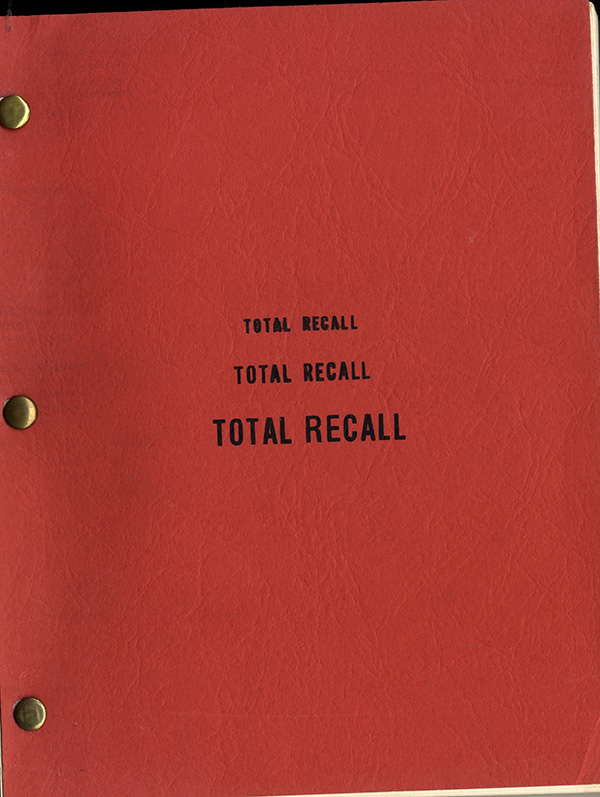 A wild and violent ride in the spirit of Verhoeven’s Robocop, Total Recall stars Schwarzenegger as a 21st-century construction worker who discovers that his entire memory of the past derives from a memory chip implanted in his brain, learning that he is actually a secret agent who had become a threat to the government. To deal with the threat, those in power planted the chip and invented a domestic lifestyle for him. Once he has realized his true identity, he travels to Mars to piece together the rest of his identity, as well as to find the man responsible for his implanted memory [The AllMovie Guide]. Nominated for two Academy Awards (Best Sound, Best Effects), and winner of the Academy’s Special Achievement Award for visual effects.

“HE AWOKE—and wanted Mars.” Those are the first five words of Philip K. Dick’s short story, “We Can Remember It For You Wholesale,” first published in September 1965 (some sources say April 1966), which later became the basis for the film, TOTAL RECALL (Paul Verhoeven, 1990).

Dick’s story, set in the future, provides what is essentially the movie’s first act. An apparently ordinary man, Douglas Quail, has persistent dreams and fantasies relating to the planet Mars. Since he cannot afford to actually travel there, he does the next best thing; he goes to a company, Rekal Incorporated, who promises him that, in exchange for a modest fee, they will implant false memories to make Quail think he has gone to Mars. However, as soon as the technicians start the procedure, there is a glitch. Quail, as it turns out, has already been to Mars – as a top secret agent whose memories of his identity and mission have been erased by the agency who sent him there – and the process has awakened those buried memories, endangering Quail and everyone around him.

The story was optioned by screenwriter Ronald Shusett in 1974. At that time, Philip K. Dick was barely known outside the science fiction community, and he was not yet the major cult figure he would become after the release of his novel VALIS in 1981 and the movie BLADE RUNNER in 1982. In the meantime, Shusett and his writing partner, Dan O’Bannon scored a major success with their screenplay for the 1979 movie, ALIEN.

This is one of reportedly forty-two screenplay drafts that were written before the film was ultimately shot – including several by David Cronenberg, who was briefly attached as writer/director in the early 1980s.

Shusett and O’Bannon’s 1983 draft has roughly the same three-act structure as the completed film. Act One – Douglas Quail (“Walter Quail” in this version) goes to Rekall Incorporated where buried memories of his prior identity as a secret agent on Mars are uncovered. Act Two – Pursued by agents who are trying to kill him, Quail escapes Earth and returns to Mars. Act Three – Joined by former girlfriend Melina and other mutated members of the Martian “Resistance,” Quail finds and reactivates ancient Martian machinery to create a force field around the planet and save it from the domination of fascist Earth.

The May 1983 screenplay has the same lighthearted and adventurous tone as the completed film (think: James Bond in Outer Space). Many of the movie’s best ideas are already in this draft, including: the videotaped messages left by Quail’s former identity, “Hauser,” to help him in his quest; the painful removal of a monitoring device from Quail’s skull; Quail’s escape to Mars disguised as an entirely different person (in this draft, as a dwarf; in the movie, as a middle-aged woman); Benny, the helpful “Rickcycle” (rickshaw/bicycle) driver who ultimately betrays Quail and Melina; Kuato, the leader of the Resistance, revealed to be a baby-like “twin” growing out of the body of a mutated Resistance member (an idea repurposed from Philip K. Dick’s novel, DR. BLOODMONEY); and the emissary from Rekall, Inc. who tries to convince Quail on Mars that it’s all an illusion.

In this version, both Melina and Quail turn out to be mutants. Quail has the mutant ability to see 3 seconds into the future (an ability he uses exactly once). We meet a fake Resistance leader who is a double of the real Resistance leader, an idea abandoned in the final film version.

What’s notably missing from this version is an individualized primary villain or antagonist. Quail and the rebels are simply fighting against the shadowy Agency. Although Quail’s “wife,” Kirsten – actually an undercover agent – attacks him in Act One, she does not reappear in Acts Two or Three. Most of the revisions that will occur in subsequent drafts have to do with the story’s problematic final act.

The January 1986 screenplay draft adds a defined antagonist, Vilos Cohaagen (played by Ronny Cox in the movie), who is the director of Earth Intelligence Operation (“EIO”). The hero’s name is now Douglas Quail, same as in the original story. Martian girlfriend, Melina, who was an archeology student in the 5/83 draft, is now “big boss” of the Martian cab company.

In this version, the bad guys’ motivations are clearer. Cohaagen wants the mutant Martians off Mars so it all belongs to Earth, and is prepared to destroy the atmosphere within the City’s protective dome to accomplish this goal: “They’ll stop resisting when they stop breathing.” Quail and Melina have four hours to get to an ancient Martian Sphinx so they can foil Cohaagen’s plan. Quail is the only one (the missing piece) who can activate the Sphinx, and when he does so, the entire Martian atmosphere is transformed into breathable Earth air: “Just goes to show you. They don’t make Sphinxes like they used to.”

The involvement of mega-star Arnold Schwarzenegger was the single most important factor in getting the film finally made, and its screenplay – credited onscreen to Ronald Shusett, Dan O’Bannon, and Gary Goldman (from a story by Shusett, O’Bannon, and John Povill) – has been tailored to Schwarzenegger’s particular talents and physique. His cover profession on Earth, for example, is that of a construction worker.

Director Paul Verhoeven’s principal contribution appears to have been making all of the sex and violence that was implicit in the earlier screenplay drafts more excessive and visceral. The hero’s name is now Douglas Quaid. Martian girlfriend Melina (Rachel Ticotin), who was an archaeology student in the 5/83 draft, and a cab company operator in the 1/86 draft, is now a prostitute, and much of the action takes place in her red light district.

All of the versions discussed here begin with a dream sequence taking place on Mars, but the film version adds the nightmarish image of Schwarzenegger’s eyes popping out of his head when exposed to the Martian atmosphere. Oxygen, and its absence outside the domed city, is the principal motivating force in this version.

In addition to the main villain Cohaagen, the movie adds a secondary henchman, Richter (played by Michael Ironside), who does most of the dirty work. He is also romantically involved with Quaid’s fake wife (played in the film by Sharon Stone) whose role has been significantly expanded, including a reappearance in the film’s final act.

Throughout the movie, as in the previous screenplay drafts, the hero is aided by video recordings made by his former persona, Hauser, but the movie adds a significant twist – Hauser was actually one of the bad guys, a friend and ally of Cohaagen, and Quaid becoming a good guy who helps the rebels save the planet is a development the villains did not foresee.

There was a remake, also titled TOTAL RECALL, released in 2012, but omitting all references to the planet Mars.