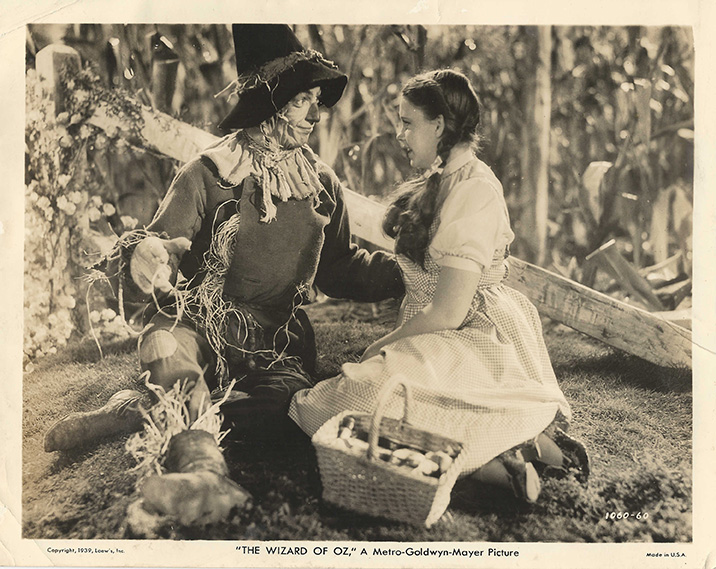 Vintage original 8 x 10” (20 x 25 cm.) black and white single weight glossy silver gelatin print still photo, USA. Judy Garland, Frank Morgan, Hamilton, Billie Burke, dir: Victor Fleming; Metro-Goldwyn-Mayer. Amongst the first scenes to be filmed under the director’s hand of Victor Fleming was Dorothy’s meeting of the Scarecrow in the cornfield on the way to the Emerald City. Some months before this Oct. 1938 meeting, Judy and Ray went through the same paces on a much different set under the direction of Richard Thorpe. The footage was unsatisfactory and scrapped. George Cukor took over for a while and both characters costume and make up were greatly changed. Fleming oversaw the reconstruction of the set! Months after this, when an additional musical number was decided upon, in April 1939, this set was reconstructed and Garland and Bolger went through more paces Ray Bolger, Jack Haley, Bert Lahr, Margaret under Busby Berkeley’s hand. That footage was completely cut, though found some 50 years later. This is still 1060-60. The slight sepia toned photo has a crease at the top left corner and archival tape has been used to re-enforce. A tear at mid margin right has been repaired and tape has pulled a bit of border emulsion and bit of the paper from the verso. Copyright, 1939 Loew’s, Inc. and title information along the bottom margin. VERY GOOD-FINE.