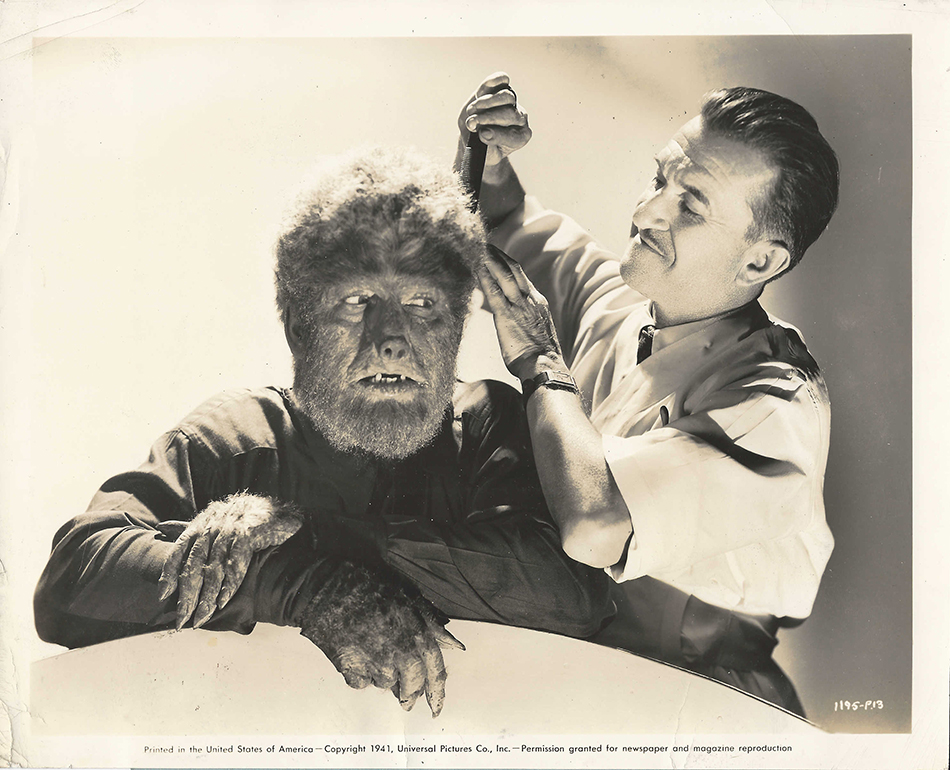 Vintage original 8 x 10 (20 x 25 cm.) black and white single weight glossy silver gelatin print still photo, USA. Lon Chaney Jr., Claude Rains, Warren William, Ralph Bellamy, Patric Knowles, Bela Lugosi, Evelyn Ankers, Maria Ouspenskaya, dir: George Waggner; Universal. One of the finest of Universal’s 1940s horror genre, with a great screenplay by Curt Siodmak. A fine cast, including some of the horror genres’ finest actors. A man returns home only to be attacked by a strange creature, the disease he is left with turning him into a Wolf Man. Here is a rare image, used for publicity of make-up artist Jack Pierce putting the finishing touches on Wolf Man Lon Chaney, Jr. Siodmak’s script suggested that the transformation of the character was all in his mind, but Universal took a more literal approach and had the Wolf Man appear on screen. In order for that to happen, Chaney spent 6 hours each day in the makeup chair having it applied and another three having it removed, leaving little time for filming. The shooting schedule last just under a month. Still 1195-P13 includes a lengthy blurb attached to the verso which details the research and work Pierce performed in order to create this special make-up. Some minor creasing within the photo. Creases at the four corners. NEAR FINE.