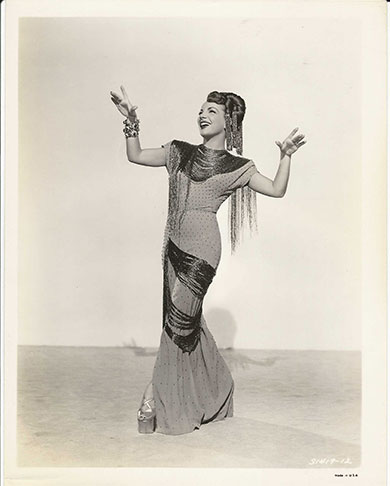 A collection of some 115 vintage original photographs, mostly 8 x 10 single weight (some double weight) glossy silver gelatin prints (9 are in smaller formats) featuring actors of Latin ancestry in Hollywood films spanning from the 1920s to the 1960s. Included are studio portraits by well known photographers, studio publicity shots, images of the actors in character, images from their private lives and photos of them in film scenes and behind the scenes making movies. Many include photographers and studio stamps and publicity blurbs on their versos. The history of the Latin actor’s representation by Hollywood is well encapsuled with this grouping. There are significant representations of the careers of Maria Montez (28 photos) and Anthony Quinn (14 photos). Amongst the other actors included are:

Photos are overall in very good+ or better condition, with a few showing signs of use for publication.