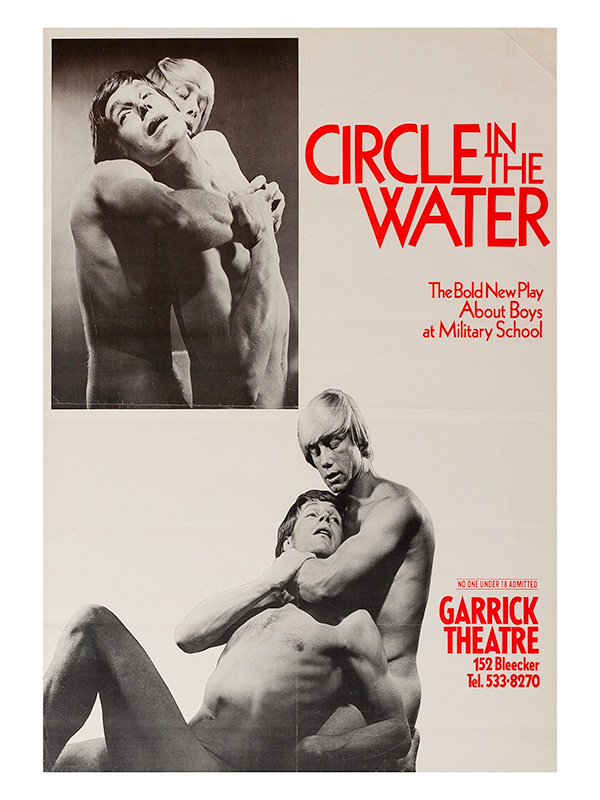 Vintage original 28 x 22”  poster, USA. Folded, with some light marginal creasing, near fine. An extremely scarce poster, from one of the early off-Broadway gay plays. Written by Gerry Raad, it is difficult to obtain much information about it. The New York Times noted in April 1970 that it was slated for a May opening. And it starred a young man then known as Cal Culver, later known to LGBTQ history under his stage name of Casey Donovan.

“Culver attended the State University of New York (SUNY) at Geneseo, where he was a member of Phi Sigma Epsilon Fraternity and the drama club. After graduation in 1965 he accepted a teaching position in Peekskill, New York. He went on to take a job at the private Ethical Culture Fieldston School on New York City’s Central Park West but was fired during his second year following an altercation in which he physically disciplined a female student (reportedly the daughter of actor Eli Wallach).

“Following his dismissal, Culver drifted into being an escort and relocated to New York City.[6] He also began pursuing an acting career, appearing in summer stock theatre with the prestigious Peterborough Players.

“Through one of his escorting clients, Culver landed a spot with the Wilhelmina Models modeling agency, commanding an hourly rate of US $60.[8] He continued to pursue stage work, landing an understudy job in 1969 in the Off-Broadway gay-themed play And Puppy Dog Tails, making his Broadway debut in 1970 in the Native American-themed production Brave and a co-starring role in the off-Broadway Circle in the Water, also in 1970.”