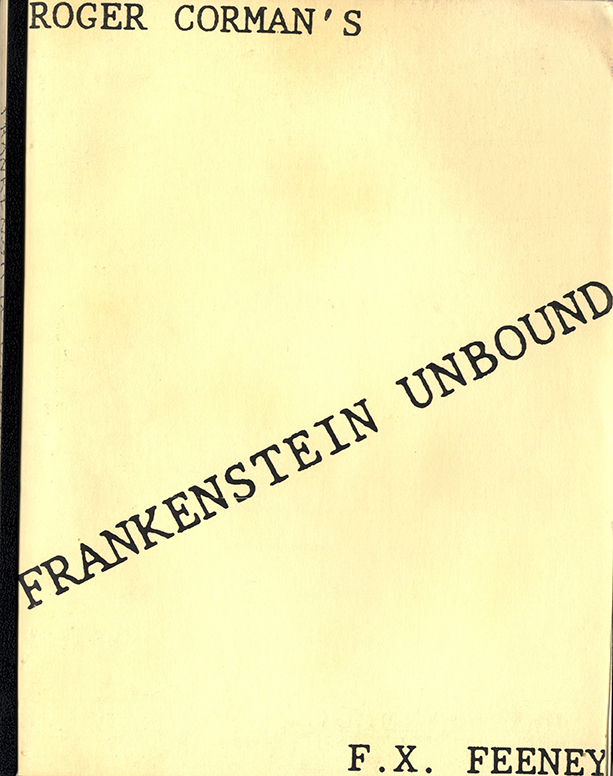 Low-budget horror king Roger Corman’s final directorial effort, and his first film after a hiatus of nearly 20 years, in which John Hurt plays a scientist from future Los Angeles who accidentally travels back to 1817 Switzerland with a talking car. He meets both Mary Shelly (Bridget Fonda) and, confusingly, her fictional creation Victor Frankenstein (Raul Julia) in this kitschy, albeit high-budget, thriller. INXS frontman Michael Hutchence makes a humorous appearance as Shelly’s husband Percy as well.

Of the fifty-six or so films directed by Roger Corman (some uncredited), only two were adapted from novels – THE HAUNTED PALACE, based on H.P. Lovecraft’s THE CASE OF CHARLES DEXTER WARD, and this one based on the 1973 novel FRANKENSTEIN UNBOUND by British author Brian W. Aldiss.

Brian W. Aldiss (1925-2017) was a novelist, poet, and editor whose principal acknowledged influences were H.G. Wells, Robert A. Heinlein, and Philip K. Dick. Aldiss also wrote several works of nonfiction, including THE BILLION YEAR SPREE (1973), a definitive history of literary science fiction in which he identified Mary Shelley’s FRANKENSTEIN; OR, THE MODERN PROMETHEUS as the first true science fiction novel and the fountainhead of the genre. His 1969 short story “Super-Toys Last All Summer Long” was the basis of the 2001 Steven Spielberg film A.I. ARTIFICIAL INTELLIGENCE.

F.X. Feeney, who wrote this script draft, was for some years the main film critic for the LA Weekly. He has written book-length essays on filmmakers Roman Polanski and Michael Mann, and is presently working on a documentary film about producer, director, and Stanley Kubrick collaborator, James B. Harris.

Roger Corman was a screenwriter before he was a director. While this script draft is credited solely to Feeney, the screenplay on the released film is credited to Roger Corman and F.X. Feeney in that order. It is the only film directed by Corman on which he also took screenplay credit. It follows that most of the changes between this script and the released film were probably Corman’s work.

Metafiction is a narrative technique or genre of fiction in which a work self-consciously draws attention to the act of writing, i.e., to its own creation, and to itself as a work of fiction existing among other fictions. Fiction and reality are intermingled and blurred. FRANKENSTEIN UNBOUND, both the novel and the movie made from it, are classic metafiction insofar as they comment upon and incorporate as characters not only Dr. Frankenstein and his monster – from Mary Shelley’s fictional FRANKENSTEIN – but also the writer Mary Godwin Shelley herself, and her lovers, Percy Shelley and Lord Byron.

Unbound, The Undead, and Other Corman Works

The philosopher/scientist who attempts to challenge the limits of his universe is a recurring figure in Corman’s work. Other memorable examples include Lee Van Cleef in IT CONQUERED THE WORLD (1956), Ray Milland as Dr. Xavier in X: THE MAN WITH THE X-RAY EYES (1963), and Vincent Price as Prince Prospero in THE MASQUE OF THE RED DEATH (1964). In FRANKENSTEIN UNBOUND, we have two such figures, protagonist Dr. Joseph Buchanan (John Hurt), and his opponent Dr. Victor Frankenstein (Raul Julia), either one of whom could have been played by Corman favorite Vincent Price in his prime.

Changes – Novel to Script to Film

The film FRANKENSTEIN UNBOUND makes two major changes to Aldiss’s novel which are arguably improvements upon it.

In the novel, the protagonist is a retired political advisor, a hapless witness to the 21st century “time slips”, one of which propels him into the era of Dr. Frankenstein and the Shelleys. In Feeney’s script and in the film, the protagonist, Dr. Buchanan, is a scientist whose work is directly responsible for the creation of the “time slips” disrupting his world. Thus, he mirrors Dr. Frankenstein as a hubristic scientist victimized by the unintended consequences of his own creation.

The movie adds brief dream sequences for the protagonist, sequences similar in form and content to the dream sequences Corman directed in the series of films he made based on the works of Edgar Allen Poe.

Giving credit where credit is due, Feeney’s script provides many of the film’s best lines. An example – Mary to Buchanan: “Percy and Byron preach free love. I merely practice it.”

Novel, script, and film end with Buchanan and the monster in a post-apocalyptic arctic wasteland, many thousands of years in the future. Unlike Feeney’s script, the film also opens in this wasteland, adding a voiceover by Buchanan that frames the rest of the movie. Buchanan finally shoots the monster who asks, “What am I?” and Buchanan replies, “An abomination in the eyes of God.” And the monster responds, “Ask me … what you are.”  Those are the last words spoken in Feeney’s script.

The film takes that scene a bit further. “So what are you?” asks the monster, and Buchanan replies, “I am Frankenstein,” recognizing at last his identity with every irresponsible scientist who preceded him and led to the destruction of this world. As the monster dies, it continues, “You don’t understand. You cannot kill me.” Continuing in voiceover after its death, “You think you have killed me. But I am with you forever. I am UNBOUND.” (A neat callback to the title of Aldiss’s book.) It is left ambiguous whether the monster continues to exist in some kind of “unbound” bodiless form or is merely a voice in Buchanan’s head. The film ends in ambiguity, showing the tiny figure of Buchanan striding through the arctic waste toward some distant futuristic city, uncertain what he will find there.