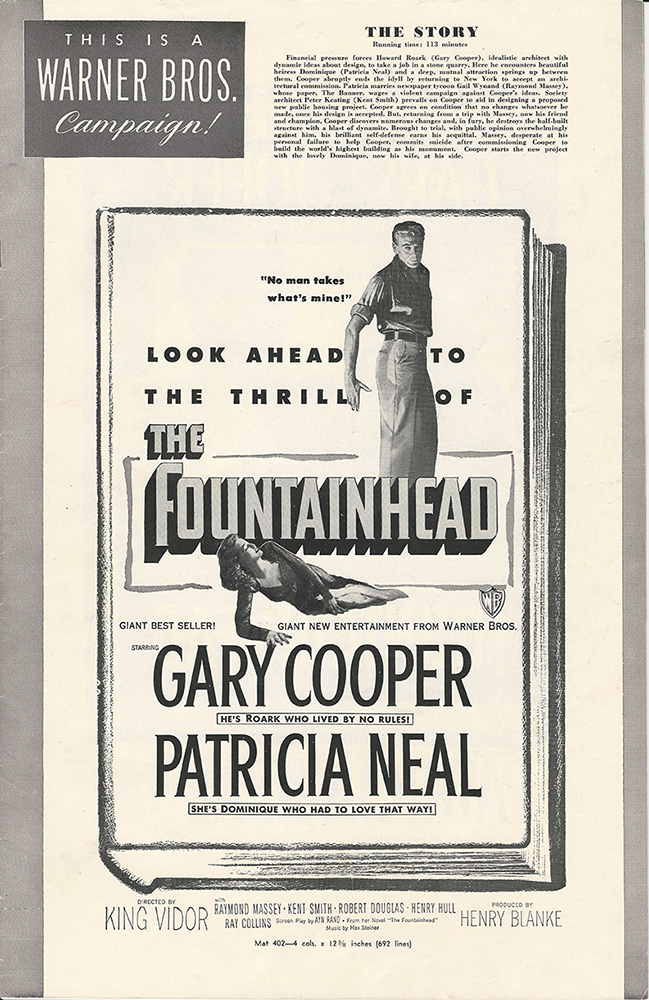 Vintage original 17 x 11” (42 x 27 cm.) campaign book, pictorial wrappers, 20 pages, USA. Gary Cooper, Patricia Neal, Raymond Massey, Kent Smith, dir: King Vidor; Warner Brothers. The famous Ayn Rand philosophical story about an architect who struggles to maintain his integrity and individualism despite the struggles to submit to popular standards. Rand wrote the script as only she could do her great book justice, and she did. Initially, Warner Brothers envisioned the story as a vehicle for Humphrey Bogart and Lauren Bacall, but Rand insisted on Cooper, who critics have thought to give the one weak performance of the film. Bacall was originally in the cast, but dropped out. Bette Davis, Ida Lupino Alexis Smith and Barbara Stanwyck were in line, but Warner Brothers decided to make a star of 22 year old Patricia Neal, who delivered with flying colors. Cooper did deliver the longest speech in a film up to that point and did a fine job. Ayn Rand insisted that not a bit of it be cut. Tense moments in the tempestuous relationship between characters Howard Roark (Cooper) and Dominique Francon (Neal) are depicted in the campaign for this film, on posters, in magazine and newspaper ads. There are tie-ins with the popular book. There are pre-written reviews, fashion lay outs with Patricia Neal, articles and the poster campaign. Very minor wear. Slight soil to cover only. ABOUT FINE.