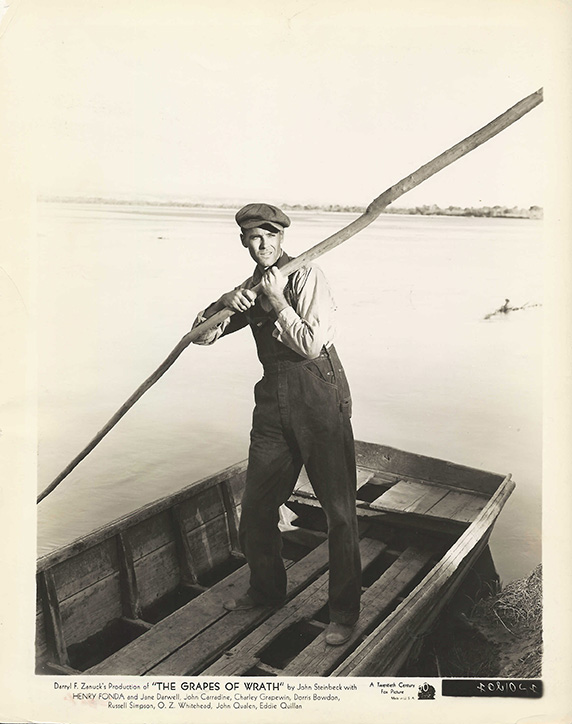 Vintage original 10 x 8” (25 x 20 cm.) black and white single weight glossy silver gelatin print still photo, USA. Henry Fonda, Jane Darwell, John Carradine, Charley Grapewin, Doris Bowdon, Eddie Quillan, dir: John Ford; Twentieth Century Fox. This is one of film history’s greatest films. Based on John Steinbeck’s great book, this story of the injustices by other Americans upon Southern drifters making their way across the country during the dust bowl period of the depression was made just as the country was coming out of this dilemma. Notable for John Ford’s direction and the great performances including that of Jane Darwell as Ma Joad, for which she won the Academy Award for Best Supporting Actress. The film also won the Academy Award for best director to Ford, but somehow in the political atmosphere of the industry at the time did no win best picture. This was perhaps because of the stranglehold of David O. Selznick (for REBECCA and the previous year’s GONE WITH THE WIND), and because of the pressure by work unions who opposed the original novel and boycotted the film. In still 450/204 Henry Fonda is seen coming ashore in a wooden boat. This location shot may have been done in Needles, CA. There is minor tanning at the top and right edges and minor creasing at the corners. NEAR FINE. 200.00