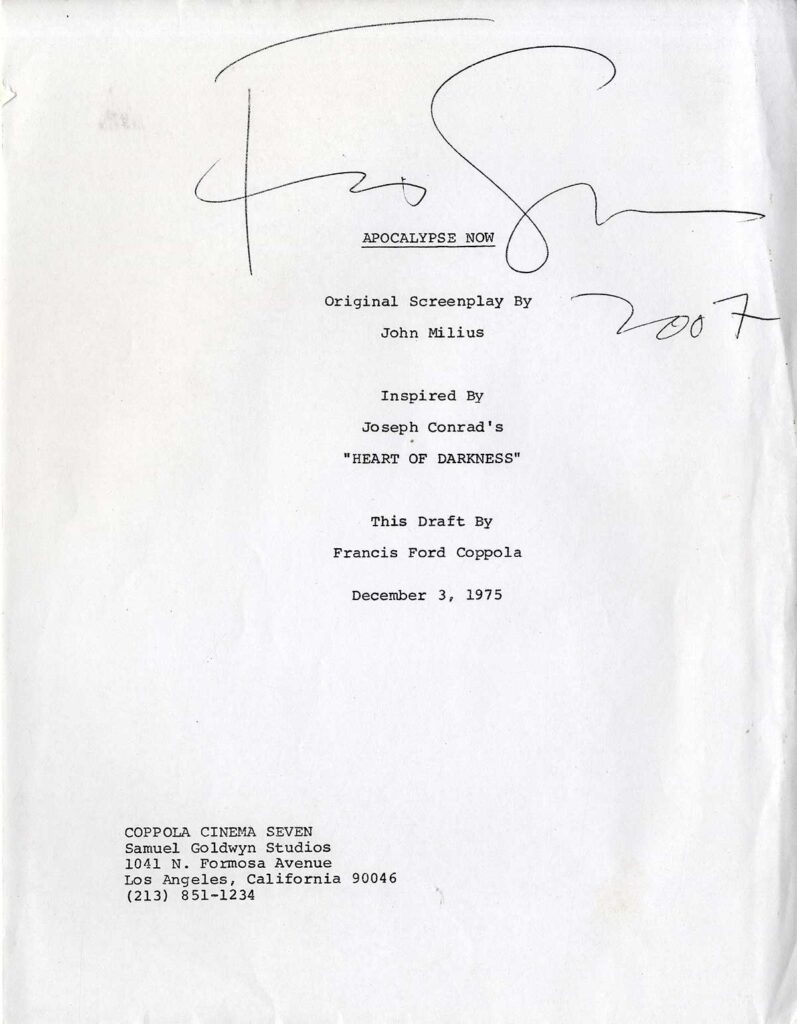 Hollywood: Coppola Cinema Seven, 1975. Printed wrappers, brad bound, 154 pp. of mimeographed script, with numerous pages of revisions laid in loosely. An extra title page denoting “Coppola’s December 3, 1975” is laid in loosely, and signed and dated by Coppola. Slight creasing to the revision pages, NEAR FINE. Also included is a 4 page questionnaire given to a preview audience on May 11, 1979, front page tanned, VERY GOOD.

As most of the movie’s fans already know, John Milius’s Vietnam War screenplay, APOCALYPSE NOW, inspired by Joseph Conrad’s 1899 novella, Heart of Darkness, was originally going to be directed by George Lucas, with Francis Coppola producing (just as Coppola had produced Lucas’ AMERICAN GRAFFITI). Due to a number of factors, including Lucas’ involvement in STAR WARS, and Coppola’s increasing interest in the project, it became a film by Francis Ford Coppola and is now considered an American masterpiece.

By the time APOCALYPSE NOW was produced, screenwriter John Milius (b. April 11, 1944 in St. Louis, Missouri) had already made a name for himself as the original screenplay writer of Don Siegel’s DIRTY HARRY (1971), John Huston’s THE LIFE AND TIMES OF JUDGE ROY BEAN (1972), and Sidney Pollack’s JEREMIAH JOHNSON (1972), among others, as well as writing and directing DILLINGER (1973) and THE WIND AND THE LION (1975) – all of them notable for the larger-than-life quality of their principal characters. APOCALYPSE NOW was an early Milius project, conceived by him in response to a college English professor who challenged his class by saying, “No screenwriter has ever perfected a film adaption of Joseph Conrad’s Heart of Darkness.” Milius’s original draft, purportedly written in 1969, transposed the action of Conrad’s story to present-day Vietnam (an inspired concept) and was titled “The Psychedelic Soldier.”

The most immediately noticeable difference between this third draft screenplay and the completed film is the lack of the distinctive voiceover narration written after the movie was shot by Michael Herr (known for his Vietnam War memoir, Dispatches), and spoken by Martin Sheen who plays its protagonist, Captain Willard (although the Milius screenplay does include some, less interesting, voiceover). Milius had intended his APOCALYPSE NOW screenplay to be a black comedy, not unlike the screenplay he co-wrote for Steven Spielberg’s 1941, however, as developed by Coppola, the project turned into something more visionary and dream-like, in the manner of Werner Herzog’s 1972 jungle epic, AGUIRRE, THE WRATH OF GOD. AGUIRRE not only influenced the look and feel of Coppola’s Vietnam film (both are largely about boats traveling up or down river), but very likely inspired its hypnotic synthesized score.

This third draft screenplay is, in fact, a rough version of the film that was eventually made. All of the film’s main characters and sequences are present, along with a lot of the film’s choicest dialogue, but much else was revised between this draft and the completed movie. For example: