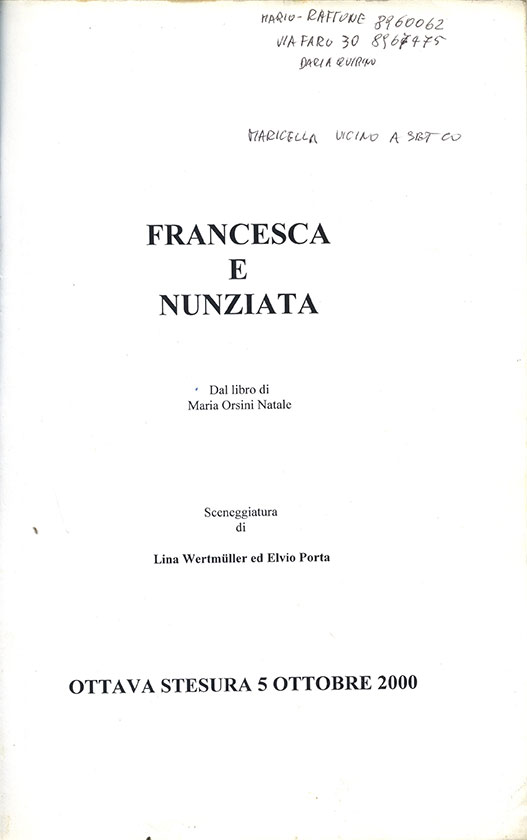 Three vintage original scripts, all quarto, all are voluminously annotated with MS. notes, presumably in the hand of the script supervisor. There are literally hundreds of pages with extensive annotations, both on the blank versos and also on the rectos (where various scenes are crossed out, but many others are altered, including MS. revisions to the script). Annotations are mostly in ink, with some in pencil, as well as some highlighting in different colors:

—UN FATTO DI SANGUE [BLOOD FEUD] (1978). Irregularly paginated, last page numbered 301 (with about 10 unnumbered pages of printed revisions and additional MS notes bound in at end) in springback cloth binder (worn, with two tape repairs at spine). All  pages with small pieces torn off at top right blank margin, having no effect on printed text nor on the MS annotations. Vg in good+ binding.

Sophia Loren, Marcello Mastroianni, and Giancarlo Giannini were the three lead actors in this film. “n pre-World War II Sicily, just as the fascists come to power, two men fall in love with the same woman. The changes in their country’s politics ultimately take all three on a journey across the ocean to New York.” (imdb)

—IL DECIMO CLANDESTINO {THE TENTH ONE IN HIDING] October 1987.  Irregular pagination ending on p. 132, with over 10 additional pages of printed location notes and additional MS. notes. All pages with small pieces torn off at top right blank margin, having no effect on printed text nor on the MS annotations. Brad bound, laid loosely into cloth-backed boards, with a few MS notes on inside of back board. A few additional pages of carbon copies of revisions and MS notes, these pages with tears and damage to blank margins. Overall, very good+, laid loosely into good outer binding.

Forced to leave her farm, an Italian widow (Piera Degli Esposti) with nine children has trouble finding a landlord (Dominique Sanda) who will rent to her.

—FRANCESCA E NUNZIATA [FRANCESCA AND NUNZIATA] 5 October 2000.   Screenplay by Wertmuller and Elvio Porta. 186 pp., with about 10 pp. of additional MS. notes bound in at end. All pages with small pieces torn off at top right blank margin, having no effect on printed text nor on the MS annotations. Brad bound, plain wrappers, generally vg+ in vg- wrappers (showing signs of wear at edges.)

At the beginning of the century, in Italy, a wealthy woman Francesca (Sophia Loren), adopts a poor little girl named Nunziata. The years pass, Nunziata falls in love with Federico (Raoul Bova), her adoptive brother, son of Francesca.

All scripts are voluminously annotated with MS. notes, presumably in the hand of the script supervisor.

Lina Wertmuller was the first woman to be nominated for a Best Director Oscar.

These three scripts represent a small working archive on her work. Both UN FATTO DI SANGUE and IL DECIMO CLANDESTINO have screenplays entirely written by her. FRANCESCA E NUNZIATA was co-written by her with one collaborator. Since she functioned on all three films as both writer and director, these three scripts represent an unusual chance to study in depth her work and the process whereby she brought these scripts to completion.