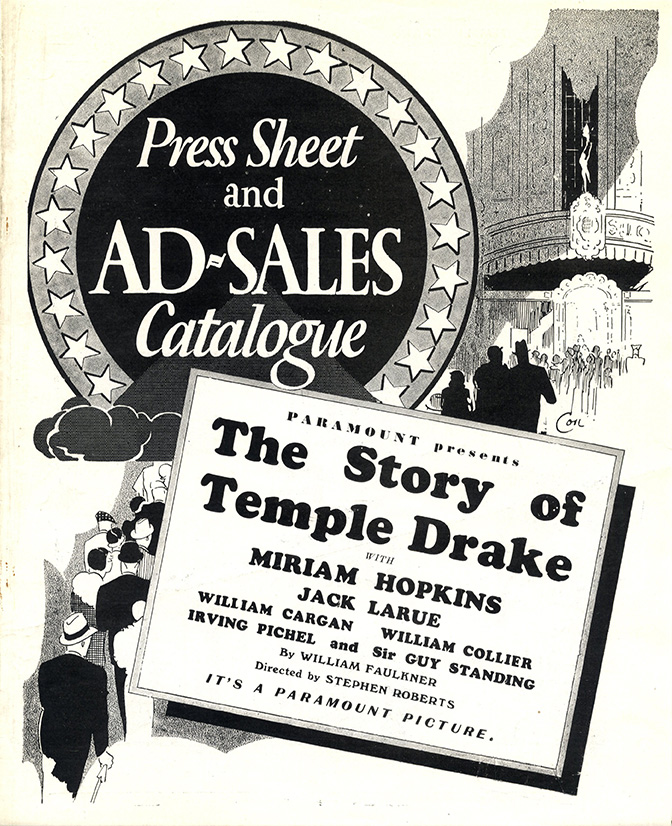 1933 pre-code film based on William Faulkner’s 1931 novel Sanctuary. An extremely rare film, only shown at festivals on occasion since its release, with only one known nitrate print in storage at UCLA. Along with Baby Face made the same year, The Story of Temple Drake is one of the most notorious of the films from the pre-Code area, so controversial that it was ordered never to be shown again after the Production Code Administration was instituted the following year.

The controversy comes straight from Faulkner’s source material, wherein a wealthy and neurotic Southern belle is trapped in a hideout with a gang of vicious criminal bootleggers. The leader of the gang, Trigger, lusts after the woman, and her subsequent rape is presented in a manner that was unheard of at the time. George Raft, under contract to Paramount, was assigned the part, but found the part repulsive and went to battle with the studio in a suit that nearly cost him his career.

This British pressbook has extensive illustrations of the notorious advertising and poster campaign which eventually made the film’s release such a troubled one. A rare piece from a film that is legendary in the history of literary adaptation and film censorship. It is very interesting to note a few references to Faulkner in the text, as he was not yet a well-known author, much less in the UK.