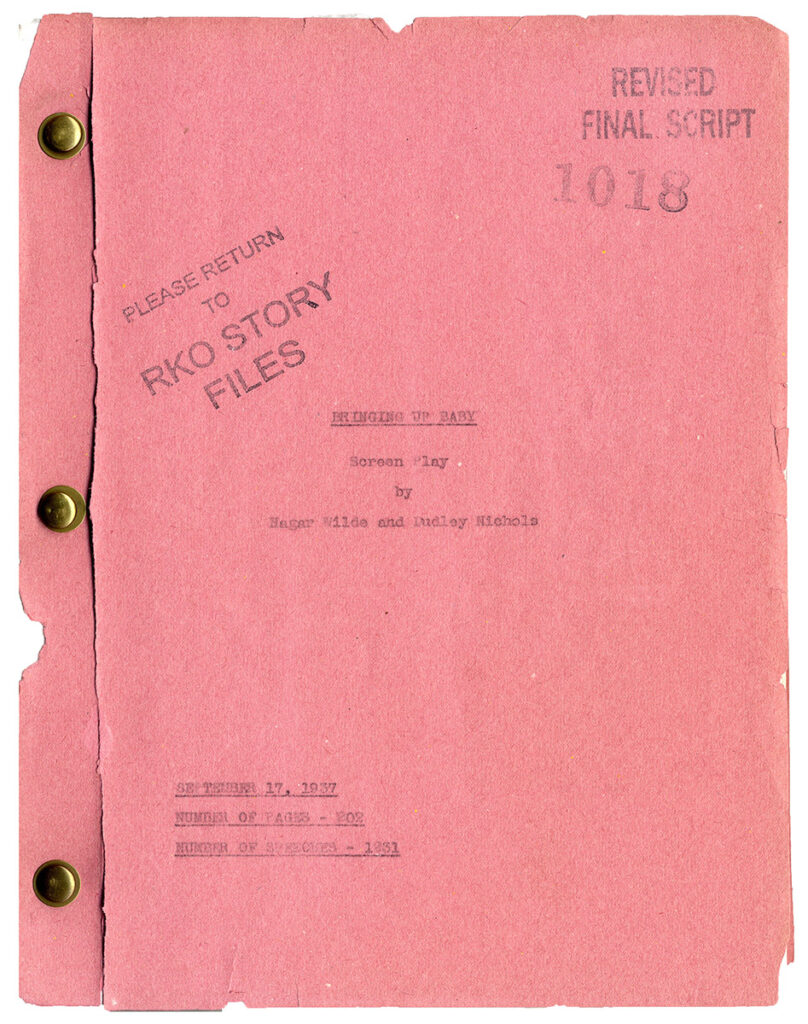 Though not a commercial success at the time of its release, Howard Hawks’s BRINGING UP BABY is now considered to be one of the greatest — and funniest — “screwball comedies” ever made. Specifically tailored to its stars, Katherine Hepburn and Cary Grant, the film showcases the two actors, who worked remarkably well together, at their verbal and physical comic peaks.

The screenplay is credited to Hagar Wilde and Dudley Nichols, neither of whom was known for writing comedy prior to this movie. Hagar Wilde (1905-1971) was a short story writer, novelist, and playwright, best known for writing the stage melodrama GUEST IN THE HOUSE. Dudley Nichols (1895-1960) was one of the most prolific and respected screenwriters of the 1930s and 1940s, remembered primarily for his collaborations with John Ford. Aside from writing the screenplay for Ford’s THE INFORMER (1935), for which Nichols received an Academy Award, he also scripted Ford’s PILGRIMAGE (1933), THE LOST PATROL (1934), MARY OF SCOTLAND (1936), STAGECOACH (1939), and THE LONG VOYAGE HOME (1940), among many others. Nichols’ work for other directors included Fritz Lang’s MAN HUNT (1941) and SCARLET STREET (1945), Jean Renoir’s SWAMP WATER (1941) and THIS LAND IS MINE (1943), Rene Clair’s IT HAPPENED TOMORROW (1944) and AND THEN THERE WERE NONE (1945), and two more films for Howard Hawks, AIR FORCE (1943) and THE BIG SKY (1952).

The 202-page screenplay that Wilde and Nichols wrote for BRINGING UP BABY is clearly much longer than the movie that was eventually released. The plot is comparatively simple. A studious paleontologist (Grant), who is trying to secure funds for the museum that employs him, runs into a wacky heiress (Hepburn) who causes him one humiliating disaster after another, not the least of which involve a pet leopard (the “Baby” of the title) who runs away from them and is confused with an actual wild leopard that escapes from a circus. Aside from a brief epilogue, the entirety of the action takes place over a period of two days and two nights.

Differences between the “Revised Final Script” and the completed film are due not only to trimming of the dialogue, but extensive revamping and improvisations by the actors and director during shooting, and ad-libs by the actors. For example, when Grant is seen by Hepburn’s aunt wearing one of Hepburn’s negligees (his own clothes having been sent to the cleaners), Grant famously ad-libs, “I just turned GAY all of a sudden.” Another significant difference — the movie’s leopards were, in fact, panthers in the “Revised Final Script.”

The chief reasons why this 202-page script runs only 102 minutes on screen are a general streamlining of the dialogue and the fact that director Hawks had his actors deliver the dialogue at a mile-a-minute pace. Few scenes in the screenplay are omitted from the movie altogether. One scene that was omitted has the hunter Major Applegate (Charlie Ruggles) and Gogarty the gardener (Barry Fitzgerald) looking for the big cat — not knowing that there are actually two of them on the loose. Applegate does his version of a panther cry and is satisfied to hear a response. Then, to his surprise, he hears another panther cry from the opposite direction. As the screen directions indicate, “The place is lousy with panthers.” Also omitted from the movie is a comparatively lengthy scene where a psychiatrist attempts to psychoanalyze Hepburn’s character regarding her panther “delusion.”

Of all the comedies directed by Howard Hawks, BRINGING UP BABY stands out as his masterpiece. In his filmed version of this brilliantly constructed screenplay (which he undoubtedly contributed to), there isn’t one wasted moment or a single unfunny scene.