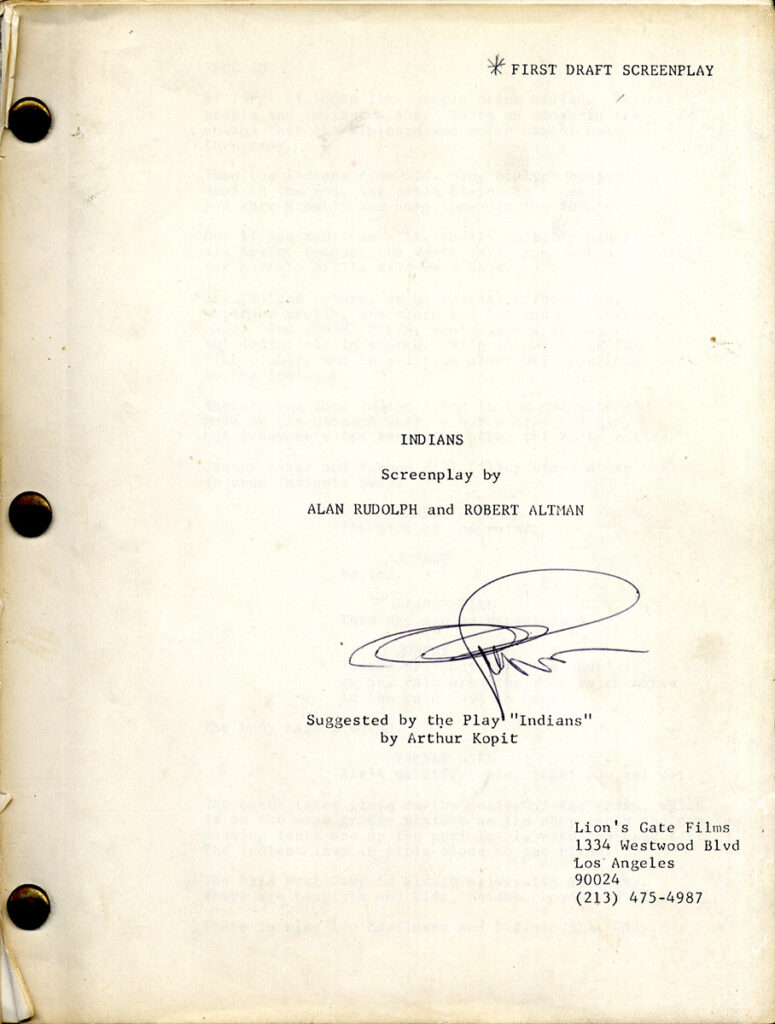 The screenplay is credited to Alan Rudolph and Robert Altman and is adapted from the play Indians by Arthur Kopit. The front wrapper is signed by Dan Perri, who was the film’s title designer. Like its immediate predecessor, NASHVILLE (1975), Robert Altman’s BUFFALO BILL AND THE INDIANS, OR SITTING BULL’S HISTORY LESSON (1976) is a meditation on show business and stardom.

This first draft screenplay by Rudolph and Altman, entitled simply INDIANS, contains most of the scenes, characters, and plot developments that made it into the completed film, yet it is substantially different. The final version, also credited to Rudolph and Altman, was considerably revised.

Take the film’s beginning. Both INDIANS and the completed BUFFALO BILL film begin with an arena rehearsal of Buffalo Bill’s 1880s Wild West Show, in which one of the Native American participants is actually killed when accidentally stepped on by a horse (Illusion becomes reality.) But in the movie, several new elements have been added — the very first image is an American flag, we pan down the flagpole, pan across the beautiful mountainous landscape where Buffalo Bill’s show camp is located, and end with the performers rehearsing a Native American raid on a log cabin. In the meantime, there is a descriptive voiceover narration — not in the INDIANS screenplay — by an added character, identified in the credits as “The Old Soldier.”

The general plot outline remains the same. The camp is excited to learn of a newly hired performer to be added to the show, the famous Indian Chief, Sitting Bull. Most of the story concerns the battle of wills between the star, Buffalo Bill (Paul Newman), who runs the show, and Sitting Bull, who has his own agenda, reaching a climax when the camp is visited by the President of the United States, Grover Cleveland. Both the INDIANS screenplay and the film conclude with a scene in which Buffalo Bill confronts the ghost of Sitting Bull.

Where the INDIANS screenplay introduces us to Buffalo Bill immediately, the movie delays his entrance while we are introduced to an ensemble of supporting characters — sharpshooter Annie Oakley (Geraldine Chaplin) and her husband, “the world’s most handsome living target,” Frank Butler (John Considine), the show’s producer Nate Salisbury (Joel Grey), its publicist, John Burke (Kevin McCarthy), Bill’s nephew and general assistant (Harvey Keitel), and lurking around the edges of the camp, Ned Buntline (Burt Lancaster), the old journalist who discovered and “invented” Buffalo Bill. The Wild West Show and its star can easily be viewed as a metaphor for a modern-day film production.

The relationship between Ned Buntline and Buffalo Bill is different in the INDIANS screenplay from what it is in the film. In this screenplay, Buntline and Bill are pals, hanging out together and trading quips from the story’s beginning. In the film, Buntline makes Bill uncomfortable, Bill avoids his “inventor” at all costs, and asks his producer to remove him from the premises.

In the INDIANS screenplay, Bill has a mistress of no special distinction. In the movie, Bill is involved with a series of opera singers (for whom he appears to have a fetish) which leads to a scene, not in this screenplay, where an opera singer’s pet canary escapes its cage, terrifying Bill, who hates birds.

The Annie Oakley/Frank Butler relationship is considerably more developed in the film. Butler’s role as Annie’s “living target,” holding up coins and playing cards for her to shoot, makes him a nervous wreck. During the command performance for President Cleveland, one of Annie’s bullets grazes his shoulder, and he has to hastily depart the arena pretending that nothing is wrong.

The defining characteristic of Buffalo Bill, the star, in both the screenplay and completed film, is his vanity. He is fundamentally a fraud, all image, no substance, who believes his own publicity, and consequently cannot deal with the comparative authenticity of Sitting Bull. The final confrontation between a drunken Bill and Sitting Bull’s silent ghost (in the INDIANS screenplay, he talks back to Bill) is fascinating to an Altman fan in the way it anticipates the 1984 Altman film, SECRET HONOR, a one-man show in which a drunken Richard Nixon spends the evening alone and babbling to himself.

There are characters in the INDIANS screenplay who do not appear in the completed film, notably a boy named John McCabe to whom Bill repeats the adage, “If a frog had wings, he wouldn’t bump his ass so much.” This is clearly the same John McCabe who we see as an adult repeating the same adage about the frog in Altman’s 1971 film, MCCABE AND MRS. MILLER. If the McCabe character had appeared in the completed movie, it might have been the only example of a character from one Altman film crossing over into another.
A comparison of the Rudolph/Altman INDIANS screenplay to the completed film opens a window onto Altman’s creative process, a combination of improvisation, embellishment, and revision. Like most Altman movies, BUFFALO BILL AND THE INDIANS is a meta-commentary on other movies — in particular, William Wellman’s BUFFALO BILL (1944) and George Sidney’s ANNIE GET YOUR GUN (1950), both of which glamorized Buffalo Bill and his Wild West Show. But Altman’s film doesn’t stop at debunking other movies. It is concerned with the American West in general, the role of the Native American in our history, and debunking all the related myths of our American past.