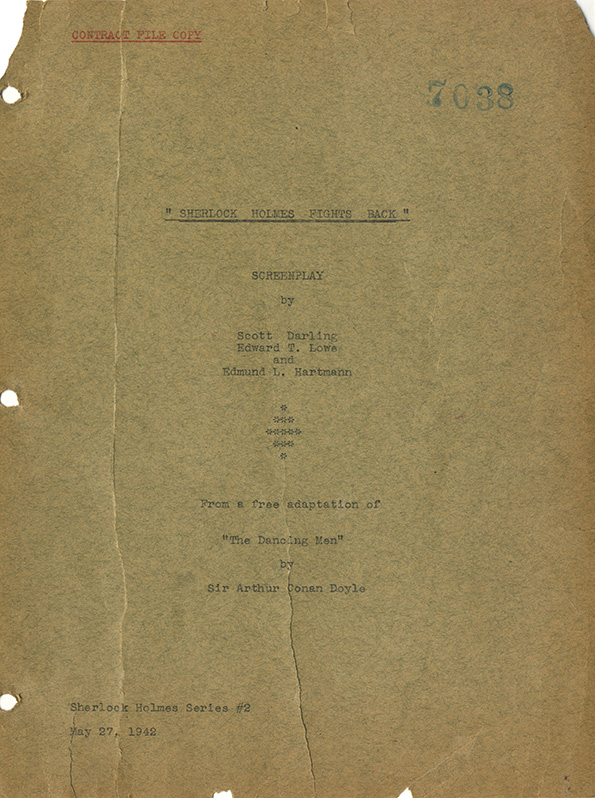 Vintage original film script, a very early revised pre-production script, in highly privileged format, of this adaptation to the screen for Universal’s distinguished series of Sherlock Holmes adaptations. This particular copy includes the revisions and “additional changes” by Edmund L. Hartmann that were made over the time span subsequent to the third draft of Darling and Lowe’s script, and they are substantial.

The film, directed by Roy William Neill and starring Basil Rathbone and Nigel Bruce, was released on 12 February 1943, and it is probable that even more alterations were made prior to the final shooting script. Script material relating to any of the pre-1950 Holmes films is uncommon, particularly material from such an early stage of development. Although well over one hundred and fifty adaptations of Sherlock Holmes to the screen are known, beginning with SHERLOCK HOLMES BAFFLED (1903), the Rathbone-Bruce portrayals have become almost canonical, beginning with THE HOUND OF THE BASKERVILLES (March 1939), and concluding with the twelfth in sequence, DRESSED TO KILL (1946). De Waal 5149.