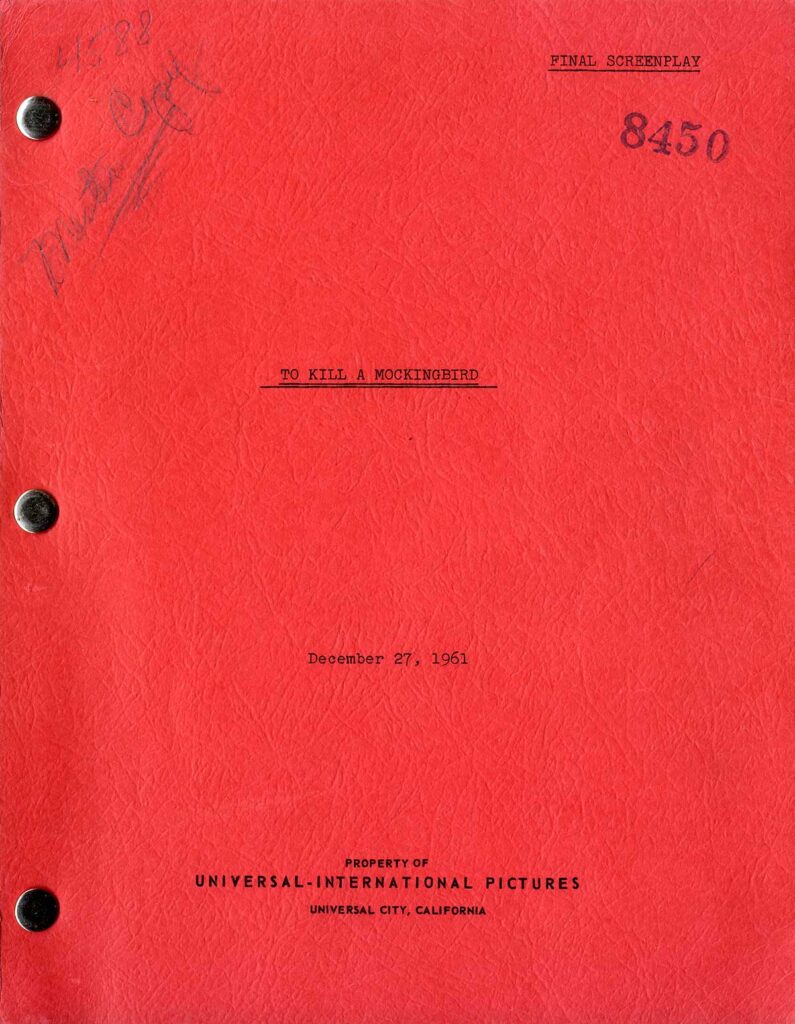 This is the final draft of Horton Foote’s Academy Award-winning screenplay, adapted from the Pulitzer Prize-winning novel by Harper Lee, an autobiographical story of a white girl with an attorney father growing up in the 1930s in the segregated South.

TO KILL A MOCKINGBIRD was the second film made by producer Alan J. Pakula (1928-1998) and director Robert Mulligan (1925-2008), a team who specialized in sensitive films featuring young people as protagonists. Their first film together, FEAR STRIKES OUT (1957) starred Anthony Perkins as a young baseball player battling neurosis. Following their much-acclaimed film version of TO KILL A MOCKINGBIRD, the Pakula/Mulligan team made LOVE WITH THE PROPER STRANGER (1963) starring Steve McQueen and Natalie Wood as young lovers, INSIDE DAISY CLOVER (1965) with Natalie Wood as a teenaged movie star, and UP THE DOWN STAIRCASE (1967) about a young teacher played by Sandy Dennis, and her inner city students in a New York high school. Without Pakula, Mulligan directed the very successful SUMMER OF ’42 (1971), a coming-of-age story set on Nantucket Island during the war, while Pakula became a director himself, with several major films to his credit, including KLUTE (1971), THE PARALLAX VIEW (1974), ALL THE PRESIDENT’S MEN (1976), and SOPHIE’S CHOICE (1982).

This final draft of Foote’s screenplay, notwithstanding some tweaks and revisions, is not substantially different from the completed film — though the film deletes some sequences for the sake of length. Foote’s final draft is essentially a more polished version of his earlier drafts, and includes more indications of camera angles, e.g., in an early scene:

The ANGLE WIDENS as Atticus starts for the front yard to get the morning paper, Scout after him.

Gregory Peck received an Academy Award for playing the role of Atticus Finch, a character based on author Lee’s attorney father, and it remains the role with which the actor is most identified.

The role of friendly neighbor, Miss Maudie Atkinson, is gradually diminished from earlier drafts to the completed film. In the drafts, it is Maudie who first talks about the negro Tom Robinson who allegedly beat and raped the white girl, Mayella Ewell. In the movie, we don’t hear about Tom Robinson (played by Brock Peters) until the town judge shows up on Atticus’s porch one night asking him to take on Tom’s case, essentially marking the beginning of the film’s second act. (In this final draft, the dialogue scene between Atticus and Miss Maudie concerning Tom Robinson has been crossed out with a pencil. The final draft screenplay has numerous duplicate yellow pages marked with pencil to reflect such revisions.)

In the transition from book to first draft screenplay to final draft and completed film, we see an increasingly sharper definition of dramatic structure. The First Act introduces young Scout, her brother Jem, their father Atticus, their friend Dill, and their mysterious unseen neighbor, Boo Radley (the screen debut of Robert Duvall). . The Second and most lengthy Act is about the trial, conviction, and ultimate fate of Tom Robinson as perceived by the children. The Third Act, almost an epilogue, taking place on Halloween some months after the trial, shows the attack on Atticus’s children by the alleged rape victim’s father, Bob Ewell, and how they are rescued by the hitherto-unseen Boo. Discussing his screenplay, screenwriter Foote talked about his efforts to compress the major events of the novel into the space of slightly more than one year. Foote’s screenplay drafts have notably more scenes of exposition and backstory in the form of characters gossiping about each other, than are included in the completed film.

One thematic element that gains increasing importance in the evolution from first draft to final draft to completed film is the gun motif. It first appears on page 6 of the final draft, when older brother Jem complains about his father to neighbor, Miss Maudie:

In every screenplay draft, Jem invites the poor boy, Walter Cunningham, to dinner following his after-school fight with Scout, but only in the final draft does the issue of guns arise during this scene, when Jem learns that the little farmer’s boy, unlike Jem, has his own gun. This leads to one of the most famous exchanges in the movie where Atticus talks about the time his father gave him a gun:

Well, I reckon because mockingbirds don’t do anything but make music for us to enjoy. They don’t eat people’s gardens, they don’t nest in corn cribs, they don’t do one thing but sing their hearts out for us…

TOO KILL A MOCKINGBIRD is many things simultaneously — it’s a memoir of growing up in the Depression-era South; it’s a Civil Rights story that turns into a courtroom drama; and the treatment of the Boo Radley character adds to the whole story a level of fairytale and myth. Screenwriter Horton Foote’s major accomplishment is to give dramatic shape to the characters and events of Harper Lee’s classic novel while retaining the book’s language, texture, and feeling.

While this was Horton Foote’s first screenplay for a feature film, it remains one of his most impressive achievements — a textbook model of great screenwriting — and in 2018, Lee’s novel was adapted by Aaron Sorkin into a successful Broadway play.