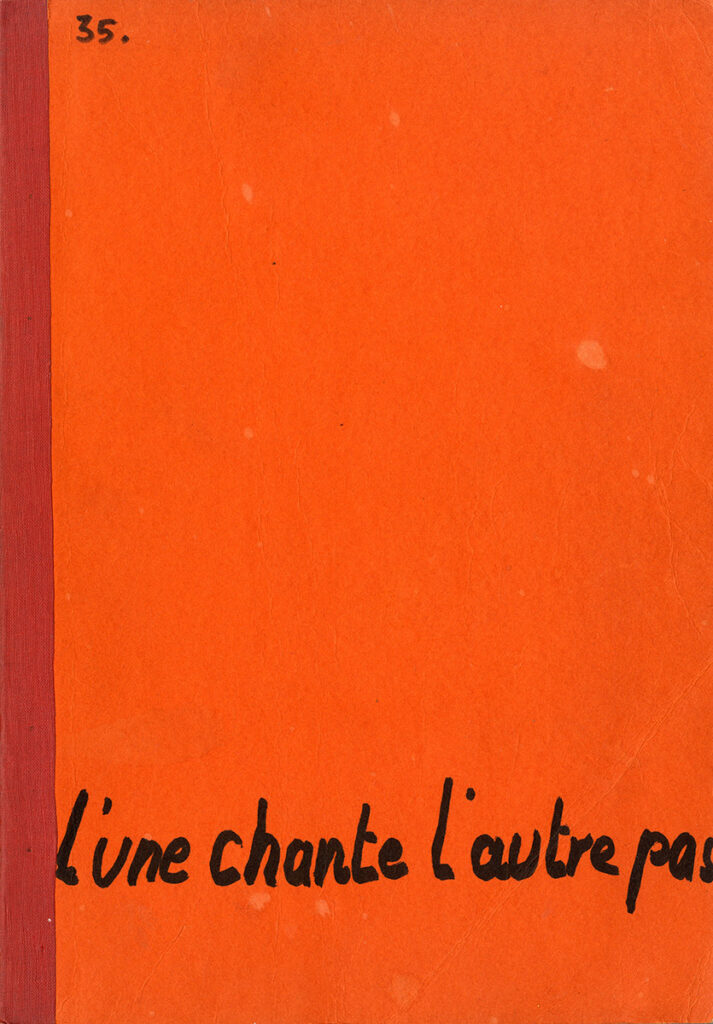 Vintage original film script, orange plain wrappers, 11 3/8 x 7 7/8″ (29 x 20 cm.), 176 pp., mimeograph (with a few pages photographically printed), with one page call sheet and one page of revisions laid in. Very good+, with light soil and some marks from a laid in revision page. Screenwriter and director Agnès Varda’s copy, with various holograph annotations in her hand (the script contains, as well, pages with photographically printed annotations).

One of the early and most important feminist films of the 1970s, and director Agnès Varda’s copy of this script, from one of the preeminent female voices of twentieth century world cinema.

Born in Belgium to French and Greek parents, filmmaker Agnès Varda (1928-2019) was the outstanding female figure of the French New Wave. Like Stanley Kubrick, born the same year as she, Varda was a world-class photographer before she became a filmmaker. Her debut film, LA POINTE COURTE (1955), shot independently and on location, is now considered by most to be the first full-length feature of the New Wave.

ONE SINGS, THE OTHER DOESN’T (L’une chante, l’autre pas) (1977) was Varda’s seventh feature film. It exemplifies the Varda method, mixing politics, aesthetics, and her documentary interest in the real world, particularly in people. Varda liked to describe her artistic process in three words: INSPIRATION, CREATION, and PARTAGE/SHARING (“You don’t make films to watch alone. You make films to show them. […] People are at the heart of my work. Real people.”).

ONE SINGS, THE OTHER DOESN’T follows two female friends over the course of fourteen years and, as the title tells us, one of them is a singer. Like several of the movies made by Varda’s filmmaker husband, Jacques Demy (THE UMBRELLAS OF CHERBOURG), Varda’s film has musical numbers performed by its characters, with the lyrics in this case written by Varda herself.

More than any of Varda’s other movies, ONE SINGS, THE OTHER DOESN’T deals with feminist issues The movie’s subject is the way its two protagonists find or grow into their respective identities as women.

The story begins in Paris in 1962 as Pauline (Valérie Mairesse), a 17-year-old schoolgirl, discovers her childhood friend, Suzanne (Thérèse Liotard), age 22, living in a studio with her sad photographer boyfriend and their two very young children. The couple are broke, Suzanne is pregnant, and since they cannot afford a third child, Suzanne desperately wants an abortion which is illegal in France at that time, and which Pauline helps her obtain through a clinic in Switzerland. The photographer commits suicide, and Suzanne moves back to her parents’ farm, where she is looked down on for having children without a father.

Ten years later, the two friends meet again at a rally for abortion rights. Pauline has changed her name to Pomme (Apple) and is part of an all-girl singing group that performs on the street. Their songs have a decidedly political bent. (“Neither Pope nor Papa. My body is my own.”) Suzanne now operates a family planning clinic in the little town of Hyères. Pomme is living with Darius, an Iranian graduate student whom she met an abortion center in Amsterdam. Suzanne’s current lover is a doctor who advises at the family planning clinic, but she breaks up with him because he is married. (“No more married men for me”).

The two friends separate, but keep in touch over the years by sending each other postcards. Pomme moves to Iran with her lover, where the two are married, but when she becomes pregnant, she opts to have the baby in France. The baby is delivered in Suzanne’s hometown by Suzanne’s doctor friend, who announces he is divorced, which leaves the door open for a marital relationship with Suzanne. Pomme wants to stay in France to resume her singing career, but her husband wants to return to Iran, and insists on taking their baby son with him. They reach a compromise. Pomme agrees to let the father return to Iran with the baby, but only after he impregnates Pomme a second time, “One child for me, and one for you.” Pomme and her singing group embark on a road trip.

In a 1976 epilogue, the two women, their lovers, their children, and their friends vacation together at a house by the sea. “For once,” the narrator tells us, “Suzanne and Pomme met without tragedy, birth, or panic.” The two friends remain fundamentally different, but they are also very alike, “They’d fought to win the happiness of being a woman.” The film concludes with an image of Suzanne’s daughter, now a beautiful teenager, played by Rosalie Varda-Demy, Agnès’ real-life daughter.

ONE SINGS, THE OTHER DOESN’T is like a colorful picture postcard addressed to the female viewer, telling her it’s okay if you want to have babies, equally okay if you don’t. You have to choose your own path. On the other hand, the film is unequivocally disdainful of the traditionally rigid male-dominated family, proposing instead an alternative model consisting of people who bond together, non-exclusively, out of love, friendship, or in pursuit of a common interest. The film’s recurring visual trope is the panning shot that connects one character to another, like the sustained shot after the birth of Pomme’s son that pans from the newborn baby in its incubator to Pomme who picks it up, then to Pomme’s mother, then to Suzanne, then to the baby’s father next to Pomme, then back to the baby. And everything in the film is viewed through Varda’s extraordinary photographer’s eye.

Agnès Varda left us an enormous body of work consisting of narrative films, documentaries, films in the form of essays, journals, or scrapbooks, a total of 23 features, as well as numerous short films and television episodes — not to mention her substantial body of work in other media. Just as ONE SINGS, THE OTHER DOESN’T charts the growth of a pair of women over the course of fourteen years, Varda’s body of work charts her development as an artist and human being over the course of seven decades, from the photographs she took in the early ’50s to the films and art installations she was still creating at the age of 90; and it is this body of work, this continuous outflowing of creative energy, more than any individual project, that secures her place as the preeminent female voice of world cinema.