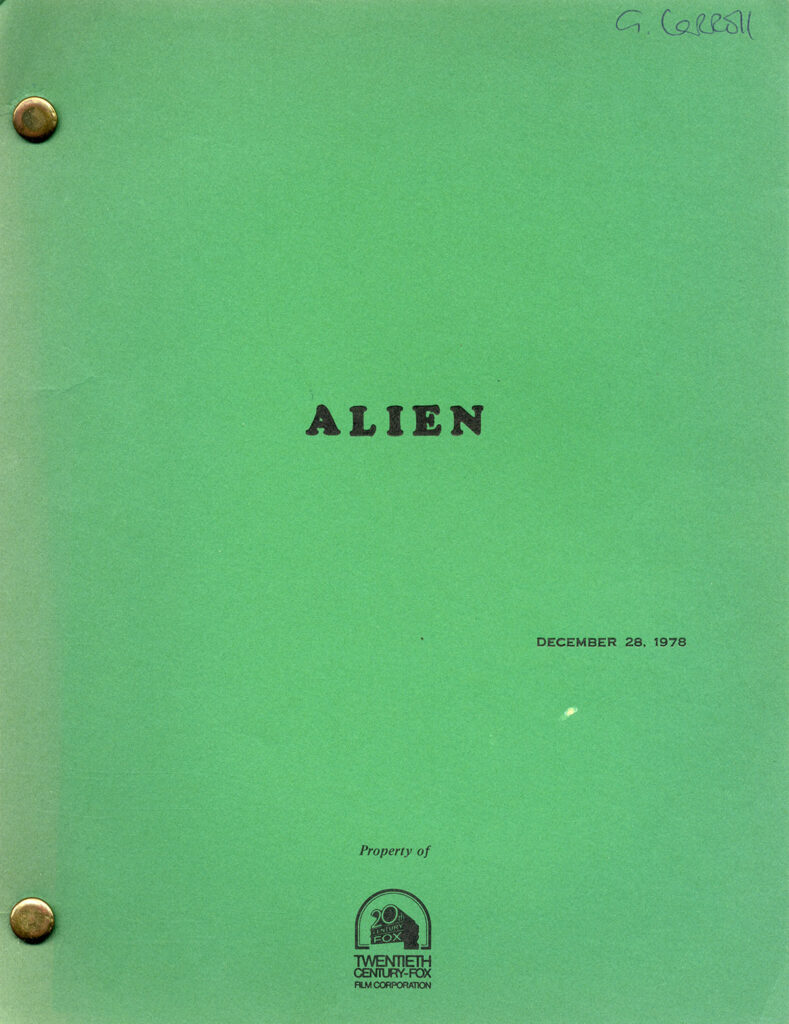 “Revised Final” Draft by Walter Hill and David Giler, Based on a Story by Dan O’Bannon and Ronald Shusett

The final “Revised Final” draft is the leanest of all the Hill/Giler drafts, 23 pages shorter than the prior “Revised Final” draft. A prefatory note indicates, “This script reflects dialogue changes added in post production for story clarification… all as written and edited after completion of principal photography on October 21, 1978.”

Where a scene that appeared in earlier drafts has been omitted (e.g., the Dallas/Ripley sex scene), the script simply indicates the scene number next to the word “OUT”.

ALIEN’s “Revised Final” draft has more (and more profane) banter among the crew members. There is more typed communication between Captain Dallas and “Mother,” the ship’s computer (“Question: What are my chances? Response: Does not compute”). A long sequence that appeared in prior drafts of Ripley, Parker and Lambert unsuccessfully attempting to eject the Alien from the starship has been omitted. The sequence of Ash the android attacking Ripley after she discovers what he is up to is preceded by his line, “There is an explanation, you know,” and this is the first draft that describes his “oral” attack on her (“Begins to roll up a magazine. Jams it down her throat”). The final scene of Ripley combating the Alien in the shuttle craft has been streamlined and improved. Here, as in the rest of the screenplay, a reader can’t help admiring the minimalist beauty of Hill/Giler’s scene descriptions:

The burned mass of the Alien drifts slowly away.
Writhing, smoking.
Tumbling into the distance.
Pieces dropping off.
Spray of particles in all directions.
Then smoldering fragments dwindle into infinity.

Ultimately, notwithstanding that ALIEN’s final shooting script was written by Hill and Giler, the Writers Guild of America awarded O’Bannon sole credit for this classic screenplay.