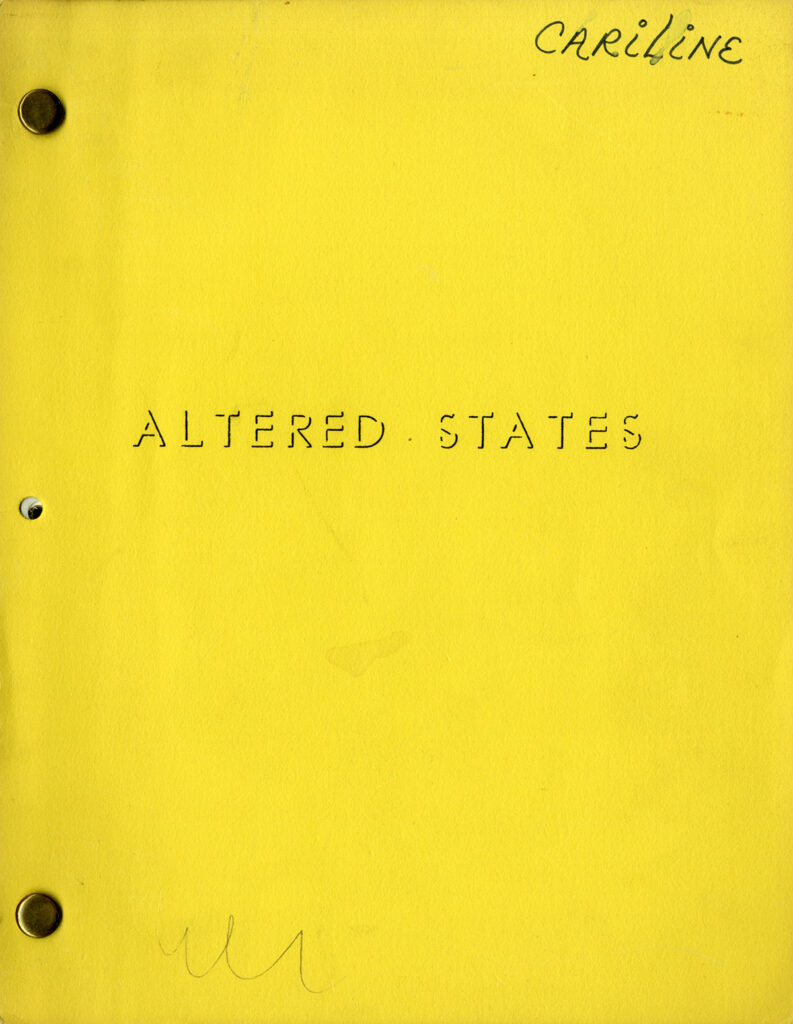 Based on the 1978 novel by Paddy Chayefsky, who also wrote the screenplay as Sidney Aaron. Director Ken Russell’s first American film.

Edward Jessup (William Hurt, in his film debut) is a Harvard student studying schizophrenia, believing that other states of human consciousness are as real as waking states. Inevitably, Jessup, now a professor, experiments with a sensory deprivation tank, travels to Mexico to participate in Ayahuasca ceremonies, and returns to the US with tinctures he acquired from elders involved in the ceremonies. He begins taking the tincture orally during his deprivation tank experiments, with drastic, genetically altering effects. Drew Barrymore makes her film debut as well, as one of Jessup’s children. Nominated for two Academy Awards.

One of the most respected writer/auteurs to emerge from 1950s television, Paddy Chayefsky (1921-1981) had a long and amply rewarded career as a TV writer, playwright, novelist, and screenwriter whose work evolved gradually from kitchen sink realism (MARTY, BACHELOR PARTY, A CATERED AFFAIR, MIDDLE OF THE NIGHT) to institutional satire (THE AMERICANIZATION OF EMILY, THE HOSPITAL, NETWORK) to his last produced screenplay, ALTERED STATES, a work of metaphysical science fiction based on his own novel.

On the one hand, ALTERED STATES, is a visionary ahead-of-its-time exploration of the nature of consciousness, inspired by the drug-assisted isolation tank research of Dr. John C. Lilly. On the other, it is a throwback to ’50s drive-in science fiction fare like Jack Arnold’s MONSTER ON THE CAMPUS (1958), in which a university research scientist, much like Dr. Jessup in ALTERED STATES, regresses to a proto-human form. Some have even described it as a reworking of Robert Louis Stevenson’s 19th Century novella, THE STRANGE CASE OF DR. JEKYLL AND MR. HYDE.

The film had a troubled production history. The film’s original director was Arthur Penn (another veteran of ’50s television) who resigned after arguments with Chayefsky. Penn was replaced by British enfant terrible Ken Russell whose interpretation of the material also displeased Chayefsky, to such a degree that Chayefsky had his screen credit changed to say “Written for the Screen by Sidney Aaron” (although it still says “From the novel by Paddy Chayefsky”).

Even the hallucinatory visions of Dr. Jessup (played by William Hurt) are filmed more or less as Chayefsky describes them — which is surprising insofar as they are filled with the kind of Christian imagery one might expect from a Catholic filmmaker like Russell rather than a Jewish screenwriter like Chayefsky. Here is an example directly from Chayefsky’s script:

“IMAGE: The ANIMAL we saw so briefly before, this time perhaps recognizable as a lamb, a white lamb, with seven eyes and seven horns. Its throat is slashed. It is dripping blood —

“IMAGE: A fluttering image of a GREEN VERONICA, one of those religious handkerchiefs with the face of Christ painted on it, a chalk-white face of an anguished Christ with little red kewpie doll spots on his cheeks, a crown of thorns on his brow —”

The movie also begins with Jessup in the vertical isolation tank, but — in a departure from the screenplay — we do not see his visions. The opening is followed by the same scenes as in the script — Jessup discussing the experiment with his friend Rosenberg (Bob Balaban), Jessup meeting his wife-to-be Emily (Blair Brown) at a party, Jessup making love to Emily and describing to her the traumatic death by cancer of his father. Only then do we return to the vertical isolation tank and see Jessup’s hallucinations for the first time — including a vision of his father’s deathbed. This makes more sense, dramatically speaking, since, having heard Jessup describe his father’s death, we understand what we are now seeing.

Other changes: In the scripted version of the Mexican brujo scene, they smoke a hallucinogenic substance. In the film version, they drink it. Jessup’s hallucinations here correspond generally to the script’s written descriptions of them, but — as in the other visionary sequences — are embellished with some typical Ken Russell flourishes, e.g., the image of Emily as a naked sphinx. The wordless sequence where Jessup reverts to proto-human form and runs wild is actually more elaborate in the scripted version — there is more interaction with the wild dogs and various zoo animals — than in the filmed version.

Since Russell did faithfully film most of what Chayefsky wrote, one can only speculate why Chayefsky insisted his screenplay credit be replaced by a pseudonym. Perhaps he objected to the rapid-fire intensity with which the actors delivered his dialogue. Perhaps, after having seen the movie’s eye-popping hallucination/special effects sequences, he thought his dialogue and ideas were upstaged by Russell’s tour-de-force visualizations. Justifiably or not, people tend to remember ALTERED STATES more as a film by Ken Russell than a screenplay by Paddy Chayefsky. Lentz, p. 846. Weldon (1983), p. 10.