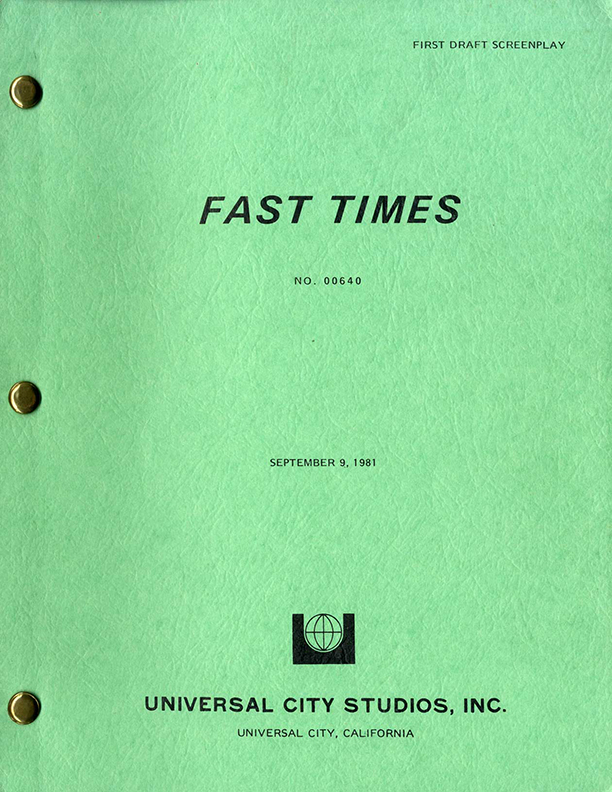 A classic film of the 1980’s, the directorial debut of an important director (Amy Heckerling, one of a small number of women directors in Hollywood in that decade), and one of the archetypal films about life in suburban Los Angeles, in the “Valley.”

In 1981, Rolling Stone writer Cameron Crowe (born Palm Springs, July 13, 1957) went undercover, posing as a student for one year at San Diego’s Claremont High School in order to write a book chronicling his experiences.  That book, “Fast Times at Ridgemont High: A True Story,” was almost immediately optioned for a film production, and the resultant movie, FAST TIMES AT RIDGEMONT HIGH, directed by Amy Heckerling, has become a cult classic.  Crowe went on to become the successful writer/director of such movies as SAY ANYTHING… (1989), JERRY MAGUIRE (1996), ALMOST FAMOUS (2000), VANILLA SKY (2001), and WE BOUGHT A ZOO (2011).

FAST TIMES was the first feature film directed by Amy Heckerling (born in the Bronx, May 7, 1954).  She, too, went on to a successful movie and television career, directing and sometimes co-writing such films as NATIONAL LAMPOON’S EUROPEAN VACATION (1985), LOOK WHO’S TALKING (1989), LOOK WHO’S TALKING TOO (1990), CLUELESS (1995), and VAMPS (2012).  CLUELESS was particularly noteworthy, Heckerling’s largely successful attempt to reimagine Jane Austen’s “Emma” in the contemporary Southern California world of FAST TIMES.

Among many other things, FAST TIMES AT RIDGEMONT HIGH is a time capsule movie, a screenplay and film that successfully captures the ambience and youth culture of L.A.’s San Fernando Valley in the late 20th Century.  In addition to the scenes set in the high school and suburban homes of the area, a substantial portion of the film takes place in a Valley landmark, the Sherman Oaks Galleria (referred to in the story as the “Ridgemont Mall”) where many of the students work after school.

The film jump-started the careers of many of the actors who appeared in it, including Jennifer Jason Leigh as the 15-year-old lead character, Stacy Hamilton, Phoebe Cates as Linda, her sexually sophisticated best friend, and Sean Penn as the stoner, Jeff Spicoli.  The film also features some of the earliest on-screen appearances of Forest Whittaker (as a football player), Anthony Edwards, Nicholas Cage, and Eric Stoltz.

Significantly, this film, directed by a woman, is largely seen through the eyes of its female characters, in particular Stacy, who has her first sexual encounter, romance, and, sadly, abortion during the course of the narrative.  Stacy’s abortion is notable for being depicted matter-of-factly without shame, condemnation, or melodrama.  The “cool” boy who impregnated her is afraid to show up on the day of the procedure, so she is taken to and from the clinic by her older brother, Brad (Judge Reinhold), neither of whom informs her parents what occurred.  Indeed, FAST TIMES AT RIDGEMONT HIGH is so tethered to the points of view of its young protagonists that we never see Brad and Stacy’s parents.

Two of the film’s most commented-upon scenes – a scene in which Linda demonstrates to Stacy how to perform oral sex using a carrot, and a scene in which Brad masturbates while observing Linda through a window – are present in this first draft screenplay, filmed almost exactly as written.

Although the completed film often has an improvisational feeling, it mostly follows the screenplay quite closely.  Some brief dialogue scenes in the screenplay are omitted, e.g., a scene where Stacy asks her brother Brad if he is a virgin, a scene between Stacy and Linda in their drivers training class.  Sean Penn as the stoner Spicolli apparently improvised one of the film’s most famous lines, crushing a beer can against his head and proclaiming, “That was my freakin’ skull!”  The screenplay surprisingly has more references to popular culture (John Bonham, Fantasy Island, Cheap Trick) than the completed film.

The chief differences between the screenplay and the film arise from director Heckerling’s use of locations, for example, the various bits of business she improvises showing the students working and hanging out at the mall.  A scene on the football field where quarterback Charles Jefferson (Forest Whittaker) takes revenge on the opposing team for what they apparently did to his car (it was actually Spicolli) – a scene that is little more than a paragraph in the screenplay – is elaborated by director Heckerling into a sequence lasting several minutes.  The final sequence at the Graduation Dance is expanded by the filmmakers to include a minute of Spicolli joining the dance band on stage in a rendition of “Wooly Bully.”

Finally, the completed movie adds an epilogue, not in this first draft screenplay, showing what the main student characters did after they graduated high school – surfer Spicolli achieves a measure of fame when he rescues Brooke Shields from drowning, and Stacy eventually becomes the girlfriend of the shy-but-likeable dork with whom she had a disastrous first date – a superimposed title helpfully informs us that they still haven’t had sex yet.
In 2005, the film was selected for preservation in the United States National Film Registry by the Library of Congress.