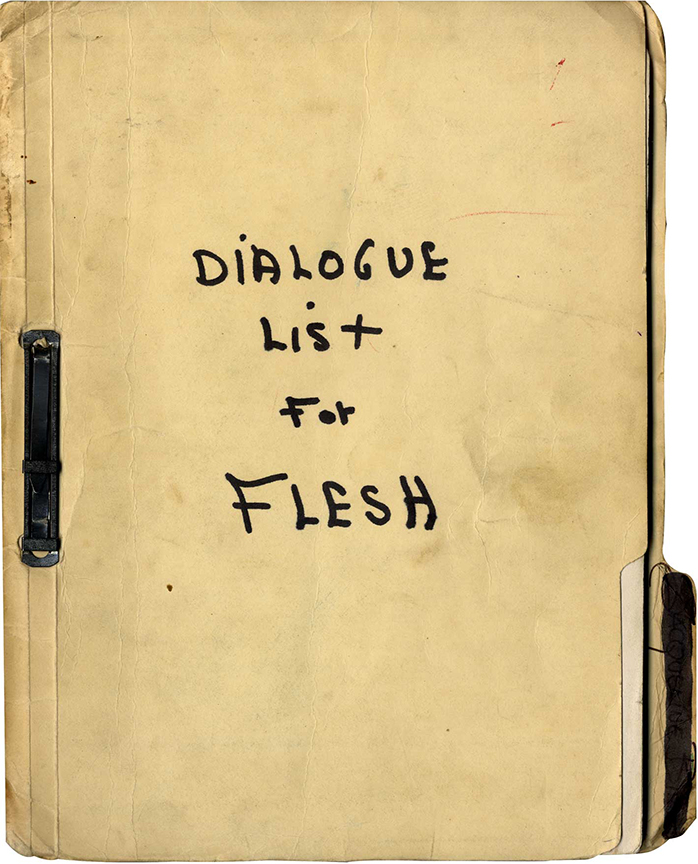 Vintage original film script.   Quarto, 32 pp. typescript, with numerous MS revisions in ink (and a few in pencil).  Bound in a plain binder with a clasp, “DIALOGUE
List For FLESH” handwritten on front cover.  Light wear to covers, very good+.  [New York: Andy Warhol Productions, 1968].
The original typed manuscript of FLESH.
FLESH, aka ANDY WARHOL’S FLESH, was the first feature film solely credited to director Paul Morrissey (born New York City, February 23, 1938) after his having spent several years as Warhol’s right-hand man in film production, co-directing and contributing ideas to such earlier ground-breaking Warhol films as MY HUSTLER (1965), CHELSEA GIRLS (1966), I A MAN (1967), and THE LOVES OF ONDINE (1968).
Morrissey essentially did “everything” on FLESH, writing, directing, photographing, casting, and editing this low-budget production.  It was the first film of an informal trilogy starring Warhol-Morrissey discovery Joe Dallesandro, followed by TRASH (1970) and HEAT (1972).
Morrissey’s “Dialogue List,” while it was more likely than not the movie’s shooting script, does not have the format of a usual screenplay.  It is a simple hand-typed double-spaced transcription of what everyone is supposed to say during the course of the film.  No scene numbers or camera angles are indicated.  Only occasionally is a location or bit of business referenced (“Joe walks through the streets and then props himself up against a building”).  That is because, at this stage of his career, Morrissey appears to have had little interest in (or familiarity with) cinematic technique as such.  His idea of filmmaking was mainly to cast people that he found attractive, point his camera at them, and watch them talk.  Which isn’t to say that Morrissey had no distinctive visual style.  The film’s opening shot – not indicated in this dialogue script – is a two-minute close-up of Joe Dallesandro sleeping.  Morrissey’s style embodies what today’s critics call “the queer gaze,” and in FLESH that gaze is directed mainly at the frequently nude Dallesandro.  The rough-edged look of FLESH falls somewhere between pornography and home movies, the best illustration of the home movie aspect being a brief wordless sequence (not indicated in the script) where Joe is seen playing charmingly with his baby son.
The film’s storyline is effectively simple.  Joe’s wife (Geraldine Smith) asks Joe to go earn some money to pay for her girlfriend’s abortion.  Joe, a male prostitute, goes out on the street (New York’s Third Avenue), where he engages in conversation with other hustlers, and there are a couple of scenes with Joe’s “johns,” one of whom is an older male artist.  In another scene, a topless dancer (Geri Miller) pantomimes performing oral sex on Joe while observed by a pair of transvestites (Candy Darling and Jackie Curtis).  Eventually, Joe returns home to his wife and her girlfriend (Patti D’Arbanville) where he finds out that – surprise! – the girlfriend doesn’t need the money after all.  Joe falls asleep on his bed while, beside him, his wife and her girlfriend make out.  Despite the movie’s improvisational feel, it turns out that most of FLESH’s dialogue is in this script and is followed quite closely by the movie’s actors.
In 1968, the year of its release, FLESH became something of a cause célèbre when it was confiscated by New York police during early screenings at Andy Warhol’s Garrick Theater. Paul Morrissey’s FLESH screenplay, aka “Dialogue List,” is thoroughly reflective of the writer/director’s sensibility and indisputably a significant document in the history of LGBTQ cinema.   The OCLC does not list any example of this script.