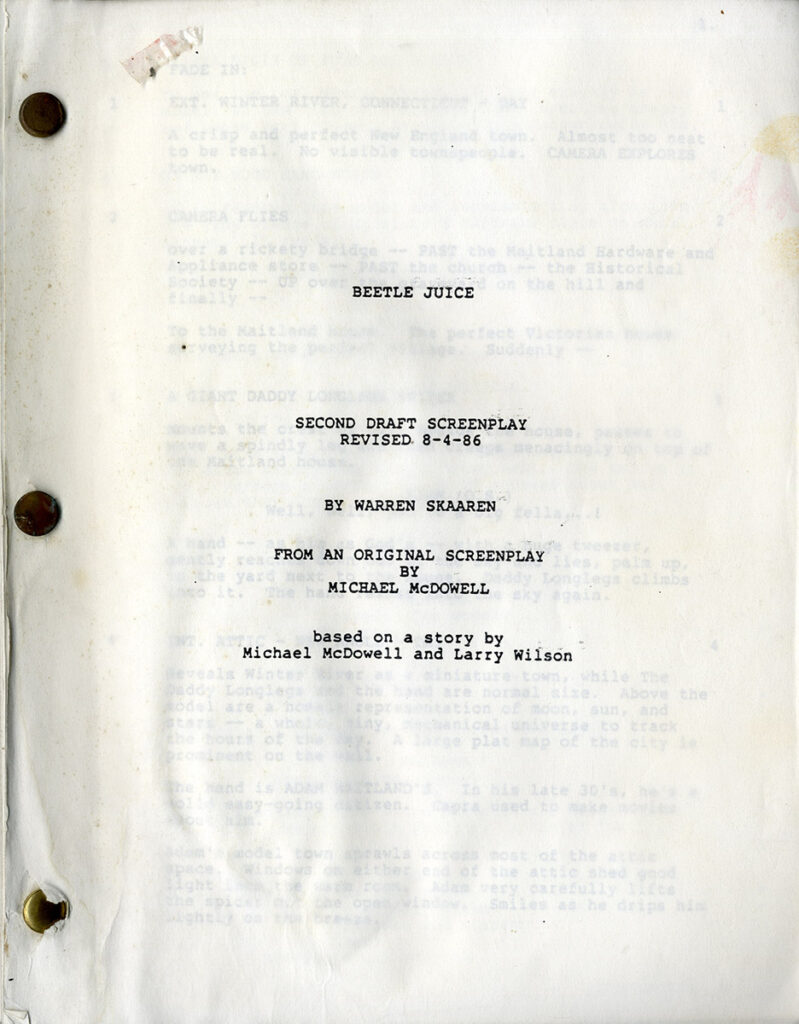 BEETLEJUICE was the second feature film directed by Tim Burton (born Burbank, California, August 25, 1958), following PEE-WEE’S BIG ADVENTURE (1985), and the first to completely express his singular sensibility, derived in equal parts from Charles Addams, Edward Gorey and Dr. Seuss. In addition to establishing Burton as a major talent, the film made a star out of 15-year-old Winona Ryder, who was cast as the young Goth protagonist, Lydia Deetz.

The imaginative story and screenplay of BEETLEJUICE was written by Michael McDowell, known primarily as a paperback novelist specializing in mysteries and Southern Gothic horror. He had previously worked with director Burton on an adaptation of Ray Bradbury’s The Jar written for the 1980s TV revival of ALFRED HITCHCOCK PRESENTS. Later, he collaborated with Burton on THE NIGHTMARE BEFORE CHRISTMAS and wrote a screen adaptation of Stephen King’s Thinner, before dying from an AIDS-related illness at the age of 49.

McDowell’s original BEETLEJUICE screenplay was much darker than the revised version of this horror comedy scripted by writer/producer Warren Skarren (BEVERLY HILLS COP II and Burton’s BATMAN). In the McDowell original, Betelgeuse [aka “Beetlejuice”] was a winged demon who wanted to kill the Deetzes (played in the film by Catherine O’Hara and Jeffrey Jones) rather than simply scaring them.

Skarren’s revised second draft screenplay begins, as the film does, with the camera flying above a perfect New England town that turns out to be a scale model located in the attic of happy couple Adam and Barbara Maitland (Alec Baldwin and Geena Davis). When the Maitlands are killed in an auto accident, they return Topper-style as ghosts to the home they used to inhabit but, unfortunately, have to deal with the new owners from the city, the pretentious Deetzes (O’Hara and Jones), who move in and drastically remodel the place. The Deetzes’ sympathetic daughter, Lydia (Ryder), is the only one who can see the phantom Maitlands, because she is “strange and unusual.” In desperation, the ghostly couple seek the help of the demented and demonic “bio-exorcist” Beetlejuice (Michael Keeton) to extricate the intruders.

In the screenplay–but not the movie–he introduces himself with a song:

Have the living got you down?
Betelgeuse!

Are they jacking you around?
Betelgeuse!

Have you broken out in hives
‘Cause you’re tired of their jive?

I will drive them from your hive…
Betelgeuse!

The differences between the second draft screenplay and the completed film are mostly a matter of judicious trimming. For example, in the screenplay, but not in the film, we learn that the Maitlands’ real estate agent is Barbara Maitland’s cousin, and that the Maitlands derive their income from a hardware store. One major difference between the screenplay and the film is the choice of music to accompany certain scenes. The screenplay indicates R&B groups like The Ink Spots and Percy Sledge, while the movie is all Harry Belafonte calypso tunes.

Another major difference between the screenplay and film is the conception of the after-life dimension that the Maitlands enter from time to time. In the screenplay, it is an almost empty void except for giant gears and the sound of a ticking clock. In the movie, it looks like the cartoon-colored landscape of an alien planet. In one scene missing from the movie, Beetlejuice tries to convince Lydia to commit suicide and join him on the other side, “You’ll meet all the greats. James Dean. Sid Vicious …” Charles Deetz’s scheme to buy the entire town and turn it into a tourist attraction is developed more elaborately.

The biggest changes come in the movie’s final scenes which have been extensively reconceived. In the script, but not the movie, Beetlejuice has Delia Deetz attacked by an animated blue sofa, and Charles is attacked by tiny cars from the scale model of the village which grow to full size and carry him out the front door. After Beetlejuice has been defeated, the movie adds a scene with him in the after-life waiting room–he unsuccessfully attempts to switch number tickets with a witch doctor who shrinks his head.

Beneath all its hip, contemporary references, BEETLEJUICE is essentially an old-fashioned fairy tale, like Rumpelstiltskin or the Pied Piper of Hamelin. In each of those archetypal stories, someone begs a supernatural entity for a boon of some kind and, after delivering the boon, the entity demands a horrifying payment. Rumpelstiltskin wants the princess’s first-born child. The Pied Piper wants all the children of the village he saved. Beetlejuice wants 15-year-old Lydia as his bride.

Looked at from an auteurist perspective, Burton’s directorial sympathies in BEETLEJUICE lay not so much with the conventionally likable Maitlands or the entertainingly obnoxious Deetz couple, but with Lydia, their alienated daughter, a prototypical Burton outsider, and, of course, with Beetlejuice himself, an anarchic id figure who anticipates the Joker and other freakish villains in Burton’s subsequent movies.