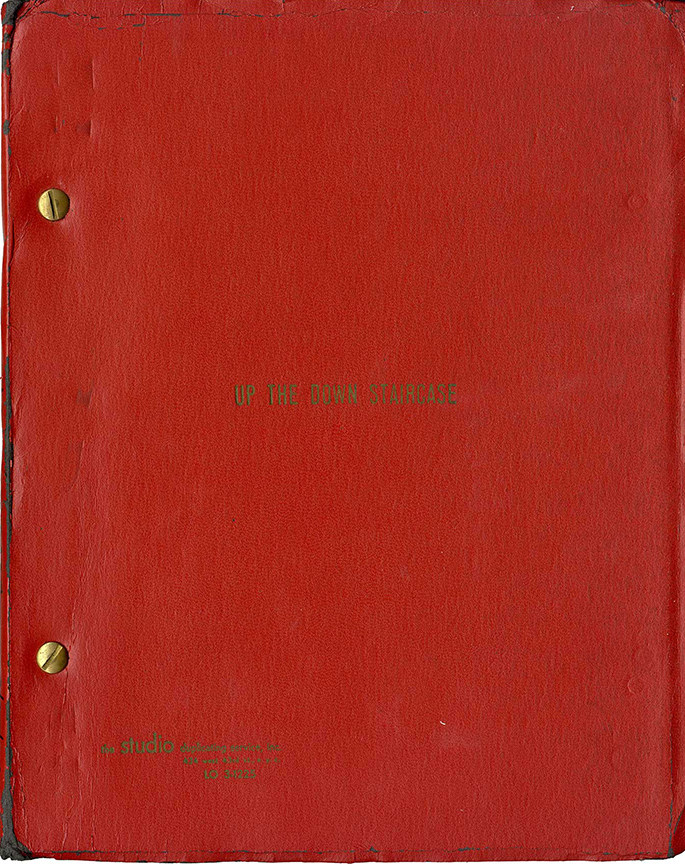 A classic film of the 1960s. Previously, films about teachers had focused on male teachers; in this film, Sandy Dennis took the lead role of a young female teacher trying to navigate the endless problems of working in inner-city public schools. Robert Mulligan’s film of UP THE DOWN STAIRCASE was adapted from the best-selling 1964 novel of the same name by Jewish-American author Bel Kaufman (1911-2014), based on her experiences as an English teacher in various New York City high schools. The movie’s screenwriter, Tad Mosel (1922-2008), was considered one of the leading dramatists of the 1950s hour-long teleplay genre. His stage play, ALL THE WAY HOME (adapted from James Agee’s “A Death in the Family” and later made into a movie), received the 1961 Pulitzer Prize for Drama.

This was the tenth feature film directed by Robert Mulligan (1925-2008), best known for his beloved 1962 classic, TO KILL A MOCKINGBIRD. Although Mulligan worked in numerous genres, almost all of his most successful films, like MOCKINGBIRD, dealt with the problems and/or growing pains of young people. They include FEAR STRIKES OUT (1957 – Mulligan’s debut feature starring Anthony Perkins as a young baseball player battling neurosis), LOVE WITH THE PROPER STRANGER (1963 – Steve McQueen and Natalie Wood as young lovers), INSIDE DAISY CLOVER (1965 – Natalie Wood as a young movie star), SUMMER OF ’42 (1971 – a coming-of-age story set on Nantucket Island during the war), THE OTHER (1972 – a rural horror film about a pair of twin boys), and his last feature, THE MAN IN THE MOON (1991 – introducing Reese Witherspoon as a 14-year-old in rural Louisiana). UP THE DOWN STAIRCASE is no exception to the rule, dealing as it does with a novice high school teacher, Sylvia Barrett, played by Sandy Dennis (her character described in the screenplay as “a small, bright person, neat, full of the joyful excitement of the young and inexperienced”), and her students.

Mosel’s screenplay often reads like an institutional satire – as if Mosel was attempting to do for the bureaucracy of inner city high schools what the screenplays of his contemporary, Paddy Chayefsky, did for hospitals in THE HOSPITAL (1971) and for television in NETWORK (1976). However, Mulligan’s direction downplays the satirical aspects of the material in favor of a pervasive and convincing naturalism, which he achieves through the use of location shooting (on New York streets and in actual New York City high schools), the realistic performances of non-actors in the roles of students and staff, and the casting of stage actors like the great Ruth White, rather than familiar Hollywood faces, in the larger roles. Sandy Dennis, playing the lead, was also comparatively unfamiliar to audiences, having starred in only one movie prior to this one (Mike Nichols’ WHO’S AFRAID OF VIRGINIA WOOLF?). Always effective with young performers, director Mulligan obtains his most moving results with the non-actors who portray the students.

Mulligan, the director of TO KILL A MOCKINGBIRD, was clearly interested in racial issues, and the most significant differences between the UP THE DOWN STAIRCASE screenplay and the completed film, apart from some judicious trimming, have to do with race. For example, in an early scene taking place in the teachers lunchroom, the movie adds a black teacher character – not in the screenplay – who complains his white students don’t trust him because he’s black, and his black students don’t trust him because they think he’s a sell-out to the white establishment. Later, after one of Miss Barrett’s brighter students makes a good point during a classroom discussion of MACBETH – the screenplay doesn’t indicate his race, but in the movie the student is black – a female black student hisses at him in the hallway, “You whitey-loving plowboy!” The movie accurately reflects the ethnic diversity of the locations in which it was filmed.

The screenplay and movie avoid melodramatic situations for the most part. The closest UP THE DOWN STAIRCASE comes to melodrama is when a plain girl student with a hopeless crush on a narcissistic English teacher attempts suicide by jumping out a window. However, the girl survives, and the movie tones down the potential melodrama through the filmmakers’ realistic treatment.

Maybe UP THE DOWN STAIRCASE is best appreciated as an antidote to the excesses of other well-known films in the high school teaching sub-genre–like the hysteria of THE BLACKBOARD JUNGLE (Richard Brooks, 1955).

A critical and box office success, UP THE DOWN STAIRCASE was entered in the 5th Moscow International Film Festival where Sandy Dennis won the award for Best Actress. Leatherette wrappers, quarto, mimeograph, 133 pp. Covers creased and moderately rubbed, bolt-bound, JUST ABOUT FINE in VERY GOOD wrappers.