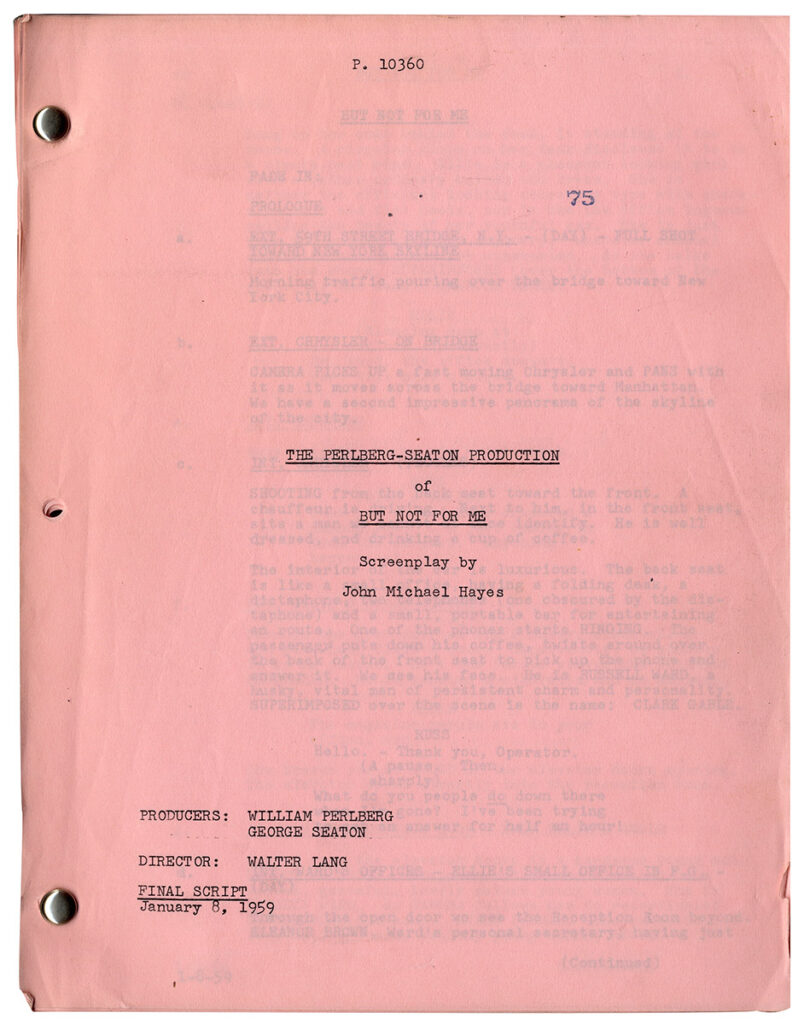 Paramount’s BUT NOT FOR ME was the third movie version of the 1934 play Accent on Youth written by longtime Ernst Lubitsch collaborator, Samson Raphaelson. It had been filmed previously as ACCENT ON YOUTH (Wesley Ruggles, 1935) and as the Bing Crosby musical, MR. MUSIC (Richard Haydn, 1950).

The screen adaptation of this third version was by John Michael Hayes (1919-2008), the legendary screenwriter, known for his wit and sophistication, who scripted four of Alfred Hitchcock’s finest thrillers: REAR WINDOW (1954), TO CATCH A THIEF (1955), THE TROUBLE WITH HARRY (1955), and THE MAN WHO KNEW TOO MUCH (1956). Hayes was the recipient of two Academy Award nominations (for REAR WINDOW and 1957’s PEYTON PLACE), and in 2004 was awarded the Writers Guild of America’s highest honor, the Screen Laurel Award.

The producing team of William Perlberg and George Seaton conceived BUT NOT FOR ME as a vehicle for star Clark Gable, with whom the pair had scored a massive hit the previous year in the romantic comedy, TEACHER’S PET (George Seaton, 1958). BUT NOT FOR ME was another romantic comedy, this time featuring Gable as a Broadway producer in his 50s who figures out how to save a failing play in the early stages of production, when his 22-year-old secretary declares she loves him, and he decides to make that situation — a young woman in love with a significantly older man — the core of the play, and to cast his secretary in the leading female role.

By the time John Michael Hayes’s “Final Script” was written, the movie had already been cast with Gable as Russ Ward, the aging producer, Carroll Baker as Ellie, the secretary, Lee J. Cobb as MacDonald, the alcoholic playwright who collaborates with Russ, and Lilli Palmer as Kathryn, Russ’s attractive 40-something ex-wife. All of these actors are mentioned by name in the screenplay’s detailed description of the film’s title sequence. Method actress Carroll Baker, best known as the erotic star of Elia Kazan’s BABY DOLL (1956), is cleverly cast against type as the plain Jane secretary/future Broadway glamor lead, who is so small-town-girl virginal in the opening scenes that at one point she is compared to Joan of Arc. When Gable’s producer inevitably falls in love with the star he has created, plot convention dictates that he will have a younger, more age-appropriate rival — Ellie’s co-star. (The screenplay is so narratively efficient that all of the principal characters are introduced within the first four pages.)

The Hayes screenplay is significantly different from the original Samson Raphaelson stage play in which the leading man is a playwright in his 40s, it is he rather than the secretary who initiates the romance, and the rival for her affections is his son!

Aside from the occasional cut line, the movie follows Hayes’s “Final Script,” including its visual descriptions, to a T. Hayes’s screenplay is not only beautifully constructed, but chock full of great dialogue. For example:

BUT NOT FOR ME was the second-to-last Clark Gable film to be released during the star’s lifetime. The movie’s true auteur is clearly screenwriter Hayes.

Not presently available on DVD, BUT NOT FOR ME has not gotten the exposure on cable television and video that it deserves. It is a well-crafted character-driven gem of a romantic comedy that should be better known.