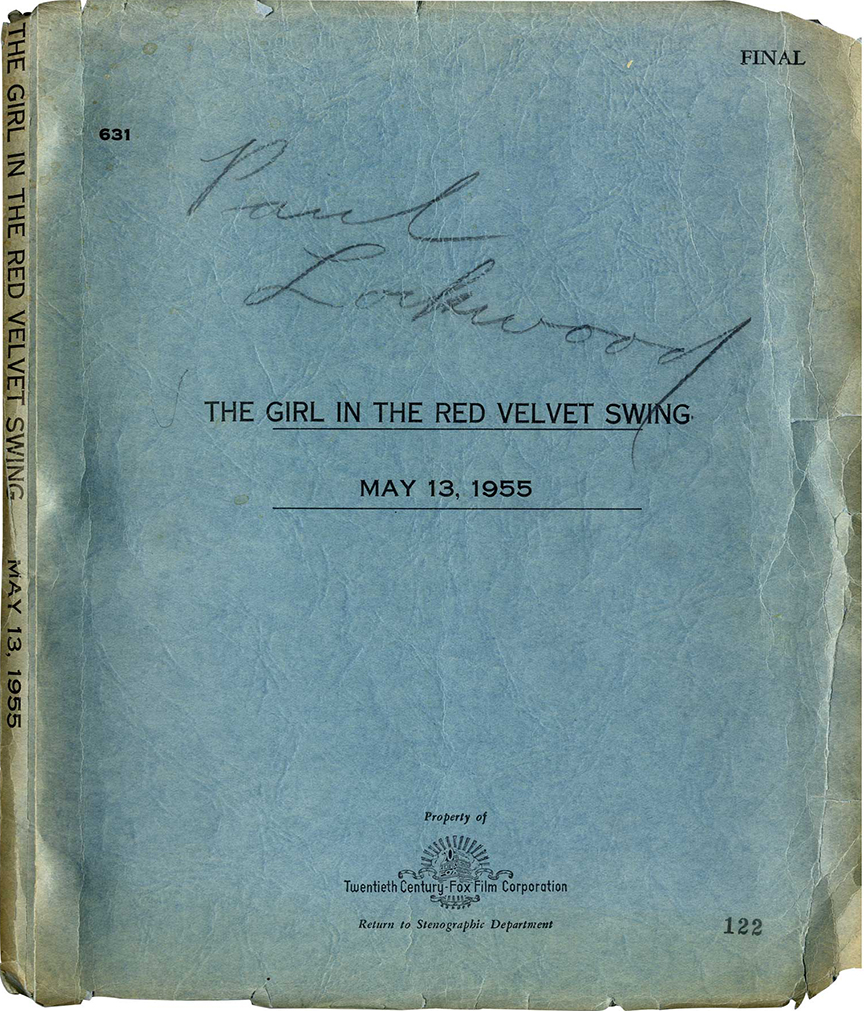 A major mid-century film, one of the first screen masterpieces of director Richard Fleischer, and of great interest for its portrayal of a working class woman viciously torn between two men: an obsessive and abusive husband (Farley Granger) and a more loving, but ultimately also controlling lover (Ray Milland). Screenwriter Charles Brackett, already acclaimed for his work on such classics as THE LOST WEEKEND and SUNSET BOULEVARD, presented himself to the world as an upper-class conservative Republican, and a married man with a daughter. Nonetheless, such reliable witnesses as Don Bachardy and Gavin Lambert are quoted as saying that Brackett was living a double life as a closeted gay man (Mann, pp. 204-206). And this becomes yet another aspect of this fascinating film.

“In 1906, the Thaw-White murder case rocked America. Because it involved a man of great consequence, another of great wealth, and a girl of extraordinary beauty, it remains unique in the annals of crime . . .” — Title card that introduces 20th Century Fox’s THE GIRL IN THE RED VELVET SWING (1955)

Charles Brackett (1892-1969), the producer and co-scripter of THE GIRL IN THE RED VELVET SWING, was an American novelist, screenwriter, and producer, best known for his screenwriting collaborations with Billy Wilder (NINOTCHKA, THE MAJOR AND THE MINOR, BALL OF FIRE, THE LOST WEEKEND, A FOREIGN AFFAIR, SUNSET BOULEVARD). As a producer, his credits included the Wilder-directed THE LOST WEEKEND and SUNSET BOULEVARD (both of which won Academy Awards for Best Picture of their respective years), and such later non-Wilder films as NIAGARA, the 1953 TITANIC, GARDEN OF EVIL, THE KING AND I, and JOURNEY TO THE CENTER OF THE EARTH.

Born in Vienna, Walter Reisch (1903–1983) was known, like Brackett, for the intelligence and sophistication of his screenwriting, and collaborated with Brackett on the screenplays of NINOTCHKA, THE GIRL IN THE RED VELVET SWING, TITANIC, and JOURNEY TO THE CENTER OF THE EARTH. On his own or with other collaborators, Reisch wrote the screenplays of THE GREAT WALTZ, THAT HAMILTON WOMAN, GASLIGHT, THE MATING SEASON, and THE MODEL AND THE MARRIAGE BROKER, among numerous others. It was Reisch who initially proposed the idea of a movie based on the scandal of famed New York architect Stanford White, Pittsburgh millionaire Harry K. Thaw – who shot White on the roof of the Madison Square Garden that White designed – and celebrity model and chorus girl Evelyn Nesbit, who was the object of their rivalry. The Brackett/Reisch screenplay was, according to Reisch, 30% fictionalized and 70% fact, based on the transcripts of Thaw’s murder trial and interviews with Nesbit herself.

Director Richard Fleischer (1916-2006) was the son of animation pioneer, Max Fleischer. After making his name with a number of well-directed B-movies and film noirs (HIS KIND OF WOMAN, THE NARROW MARGIN), Fleischer graduated to A-films with the Walt Disney mega-production 20,000 LEAGUES UNDER THE SEA (1954). Although there had been two or three films shot in Cinemascope prior to 20,000 LEAGUES, Fleischer’s 20,000 LEAGUES was the first film made in Cinemascope by a director who had a genuine feel for the widescreen process. Fleischer subsequently became 20th Century Fox’s go-to guy for Cinemascope productions, starting with VIOLENT SATURDAY (1955) followed by THE GIRL IN THE RED VELVET SWING, BANDIDO, BETWEEN HEAVEN AND HELL, COMPULSION, and FANTASTIC VOYAGE, and others. Even more significantly for Fleischer, THE GIRL IN THE RED VELVET SWING was the first in an accomplished quartet of films he made in the “true crime” genre, followed by COMPULSION, THE BOSTON STRANGLER, and 10 RILLINGTON PLACE.

THE GIRL IN THE RED VELVET SWING is a proto-feminist story told from the point of view of its female protagonist, the story of a beautiful woman treated as a pawn in a power struggle between two privileged male rivals in the oppressively patriarchal society of turn-of-the century New York. For director Fleischer, always sensitive to issues of race and class, it was one of several films he directed that dealt with the treatment of human beings as objects, “furniture,” or literal slaves – BARRABAS, SOYLENT GREEN, MANDINGO.

For its three perfectly cast leading actors – Ray Milland as the worldly architect Stanford White, Farley Granger as the neurotic millionaire Harry K. Thaw, and Joan Collins as the dazzlingly beautiful Nesbit – it was a peak in their respective careers, and it established Collins as one of 20th Century Fox’s major stars.

Conventional wisdom and propriety tell us that a young woman would be better off as the wife of a young man who is handsome and wealthy, than as the back-street mistress of a sophisticated, older, reputedly decadent, married man, but the real-life story of THE GIRL IN THE RED VELVET SWING subverts conventional wisdom by showing Evelyn to be far happier as the mistress of the older Stanford White, who genuinely loves her, than as the wife of young Harry Thaw who turns out to be neurotically possessive and murderously insane.

The screenplay and film have a fascinating four-act structure.

The historical events that inspired THE GIRL IN THE RED VELVET SWING were retold by E.L. Doctorow in his 1975 novel RAGTIME, adapted as a film by Milos Forman in 1981, and which later became a successful Broadway musical.  French New Wave director Claude Chabrol was a great admirer of Fleischer’s film, and remade it in 2007 as A GIRL CUT IN TWO (La Fille coupée en deux), changing the names of the characters and updating the story to contemporary Paris.