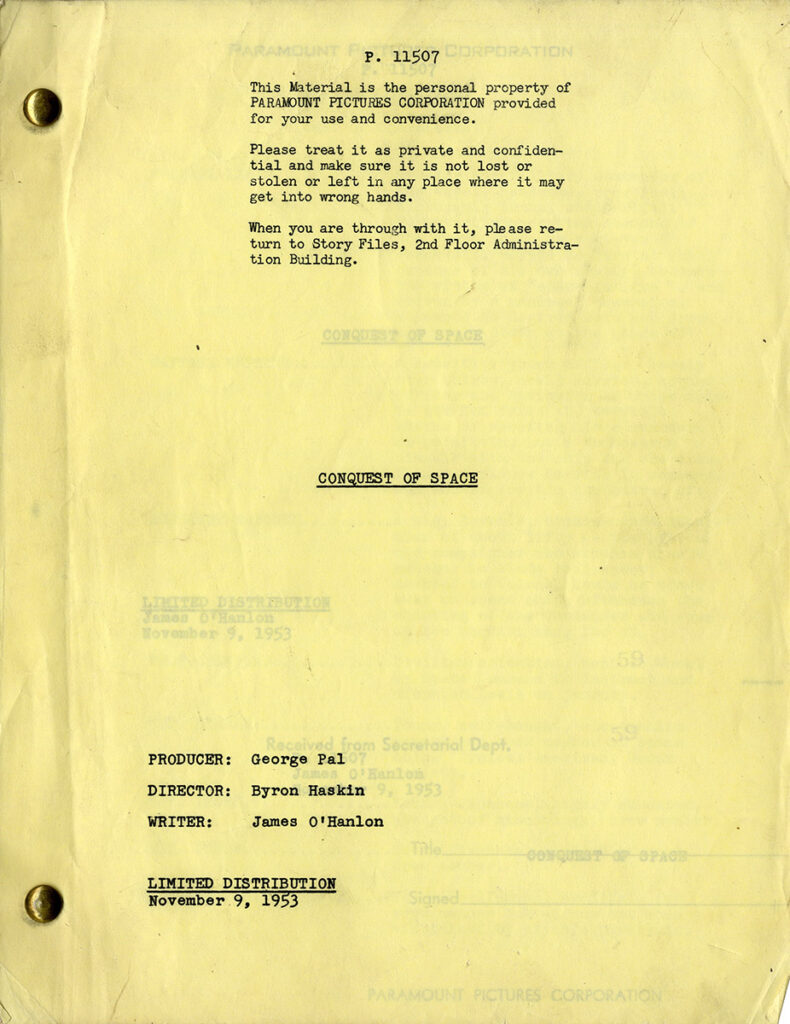 CONQUEST OF SPACE was producer George Pal’s docudrama follow-up to his early 1950s science fiction hits, DESTINATION MOON (1950) and THE WAR OF THE WORLDS (1953). Just as DESTINATION MOON had depicted as realistically as possible (for the time) how man might travel by rocket to the moon, CONQUEST OF SPACE showed the next logical steps in the space travel narrative, life aboard a space station orbiting the Earth, and a rocket flight to Mars. The film’s advertising promised, “See how it will happen … in your lifetime!“

The film was loosely based on the non-fiction book The Conquest of Space by Willy Ley and Chesley Bonestell. However, since the book had no story as such, adaptation to the screen proved difficult. Producer Pal hired four different writers to prepare screenplay drafts: Barre Lyndon (HANGOVER SQUARE), Phillip Yordan (JOHNNY GUITAR, EL CID), George Worthing Yates (THEM!), and finally James O’Hanlon (DESTINATION MOON) whose script was the one that Pal ultimately used. As film historian Bill Warren (Keep Watching the Skies!) reports, “The only elements common to [all four] scripts are the space station (called the Wheel in all but Lyndon’s script), the international makeup of the crew, and a trip to another planet.”

O’Hanlon’s screenplay is noteworthy for its essentially realistic approach. It dispenses with many of the more pulpish aspects of the genre, i.e., there are no nazi or communist saboteurs, no space aliens. The conflicts that drive the story are either physical and technological in nature (a shower of tiny meteors that tears a fatal hole in the suit of a crew member while he is outside the ship making repairs) or come from within the crew themselves (an attack of “space fatigue” that causes the captain of the ship to go destructively insane just as they are approaching their goal).

The O’Hanlon screenplay dated November 9, 1953 is fairly close to what Pal and his director, Byron Haskin, actually filmed — with one major twist. When the ship’s captain (named Lewis in this draft) goes mad, turning into a religious maniac, and attempts to destroy the vehicle before it can reach its destination, he is stopped by the first mate Merritt who kills him in defense. The surviving crew members, honoring the good the captain had previously done, decide to tell the world that he died heroically (as in the John Ford films where someone decides to “print the legend”). The major change between this draft and the completed film is that in the movie the captain has been renamed Merritt and is supposed to be the first mate’s father! This particular aspect of the movie — the father turning into a religious fanatic, and his son having to kill him — was enough to secure the film a “Condemned” rating from the Catholic Legion of Decency.

CONQUEST OF SPACE is a fascinating curio, very much a reflection of the era in which it was made. The crew is a stereotypical bunch, reminiscent of World War II platoon movies. We have the wise-cracking Jew from the Bronx, the studious Asian, and the tough middle-aged Irish sergeant. The latter character is so loyal to his captain that, even though he is not chosen to be part of the Mars mission, he stows away aboard the rocketship to stay close to him. The only women in the film are the wives, mothers, and girlfriends who communicate with the crew via telescreen from planet Earth.

Aside from reimagining the captain and first mate as father and son, the completed film is simply a tauter, more polished version of this screenplay draft. The first act introduces us to the crew aboard the space station and sets up the conflicts between them. The second act follows the crew as they rocket from the space station to Mars, land there, and after overcoming various technical and psychological obstacles, begin their return flight home.

Though not as well-known or beloved as some of George Pal’s other movies, CONQUEST OF SPACE proved to be a major influence on subsequent films in the genre, particularly Stanley Kubrick’s 2001: A SPACE ODYSSEY, which borrows some of its imagery (the wheel rotating in space), its serious documentary approach to space travel, and its sense of mystery and awe.