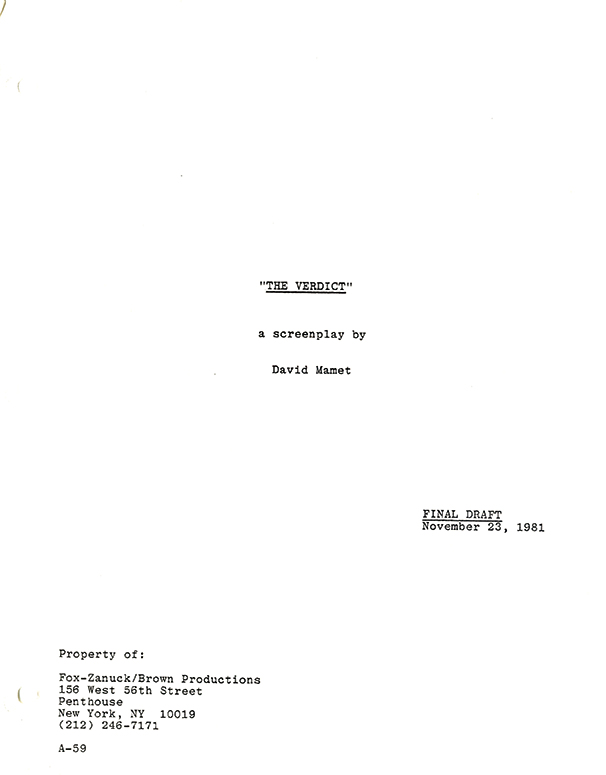 THE VERDICT was the second produced screenplay of Pulitzer prize-winning playwright David Mamet (born Chicago, Illinois, 1947) following THE POSTMAN ALWAYS RINGS TWICE (Bob Rafelson, 1981). It was based on the novel The Verdict by American trial lawyer and bestselling author, Barry Reed.

The movie had a convoluted production history. Reed’s novel was purchased by producers Richard Zanuck and David Brown (JAWS), who commissioned a screenplay adaptation by David Mamet for Arthur Hiller to direct. Neither Hiller nor Zanuck and Brown liked Mamet’s screenplay, so they commissioned a new one by Jay Presson Allen (MARNIE, CABARET).

At that point, the producers were approached by Robert Redford who wanted to play the lead, but did not like either Hiller as director or the Jay Presson Allen screenplay. At Redford’s request, James Bridges (THE PAPER CHASE) was hired to write and direct, but the Bridges rewrites also proved unsatisfactory. Bridges and Redford were fired, and the producers then hired Sidney Lumet (DOG DAY AFTERNOON, NETWORK) to direct.

After reviewing all the drafts that had been written to date, Lumet decided to use Mamet’s screenplay, with Paul Newman in the lead. Ultimately, Lumet, Newman, and Mamet all received Oscar nominations, and, in 2013, the Writers Guild of America ranked Mamet’s screenplay No. 91 on its list of the “101 greatest screenplays ever written.”

So begins Mamet’s VERDICT screenplay, the story of Frank Galvin (Newman), an alcoholic attorney on the skids in Boston, Massachusetts, reduced to handing out business cards at funerals in the hopes of scoring business from grieving widows. This is essentially a redemption story. Handed a wrongful death/medical malpractice case by a friend and mentor (Jack Warden), a case with genuine merit, and avoiding the temptation of an easy settlement, Galvin finds the moral strength to go up against the big insurance companies and their attorneys who are representing the defendant hospital and the archdiocese that owns it.

Guilt and redemption are, not coincidentally, recurring themes in the work of director Sidney Lumet (1924-2011), who explored Jewish guilt in THE PAWNBROKER (1964) and Catholic guilt, like that of THE VERDICT’s protagonist, Frank Galvin, in films like LONG DAY’S JOURNEY INTO NIGHT (1962) and PRINCE OF THE CITY (1981). Looking back on his long motion picture career, Lumet himself identified “justice” as a recurring motif, another theme quite evident in THE VERDICT. The sympathy for marginalized characters, and the presence of two of Lumet’s favorite actors, James Mason and Jack Warden, in key roles also help to make this one of Lumet’s most personal films.

There were a number of small but significant changes made between Mamet’s “Final Draft” and the completed movie. For one thing, the protagonist’s name was changed from Joe Galvin in the screenplay to Francis aka “Frank” Galvin in the film. There is a scene between Galvin and his secretary in the screenplay. Both that scene and the secretary character are entirely omitted from the completed film.

The movie trims dialogue and sometimes adds jokes. For example, in the jury selection scene, when Galvin interviews a prospective juror named Abrams, the movie adds this exchange:

Have you ever gone to St. Catherine Labouré Hospital?

One significant addition, not in the screenplay, that was most likely the director’s idea (because it is entirely visual) occurs in the scene where Galvin visits a clinic to take a look at his client, the comatose victim of the hospital’s medical negligence. Galvin takes pictures of the patient using a Polaroid camera, and places the two undeveloped pictures he took on her bed. Lumet holds on a static close-up of the two Polaroid pictures for what seems like a very long time as we watch the images of the comatose patient slowly develop and take form. This is an extraordinarily effective shot, not only from a purely visual standpoint, but because, in context, it functions as a metaphor for the gradual awakening of Galvin’s conscience.

For screenwriter David Mamet, THE VERDICT afforded the opportunity to write the kind of street dialogue, verbal negotiations, and searing invective that were characteristic of Mamet stage dramas like GLENGARRY GLEN ROSS. For example, when Galvin knocks on the judge’s door at night, begging for an extension of the trial, because his star witness has gone missing:

I had a witness disappear on me.

I could subpoena him if I had a week.

I don’t have a week. This case never should
have come to trial. You know better. You’re
Mr. Independent. You want to be independent?
Be independent now. I’ve got no sympathy for you.

The movie has an opening shot and a closing shot, most likely contributions by the director, neither of which are indicated in the screenplay. The opening shot, which plays under the credits, shows Galvin in silhouette in a Boston bar playing pinball. (There is no music under the credits, only the sound of the pinball machine.) The closing shot relates to a subplot involving a woman named Laura (Charlotte Rampling) who becomes Galvin’s lover and confidante, having been paid to do so by the defense attorneys hoping to gain inside information concerning their opponent’s strategy. The fact that she comes to care for Galvin makes his eventual knowledge of her betrayal all the more painful for both of them. The film’s last shot has Galvin alone in his office listening to the phone ring. We know he knows it is Laura, and we know he will not pick up.

The courtroom scenes are, of course, brilliantly written by Mamet. Between them, screenwriter Mamet and director Lumet created one of the finest legal thrillers ever committed to film.