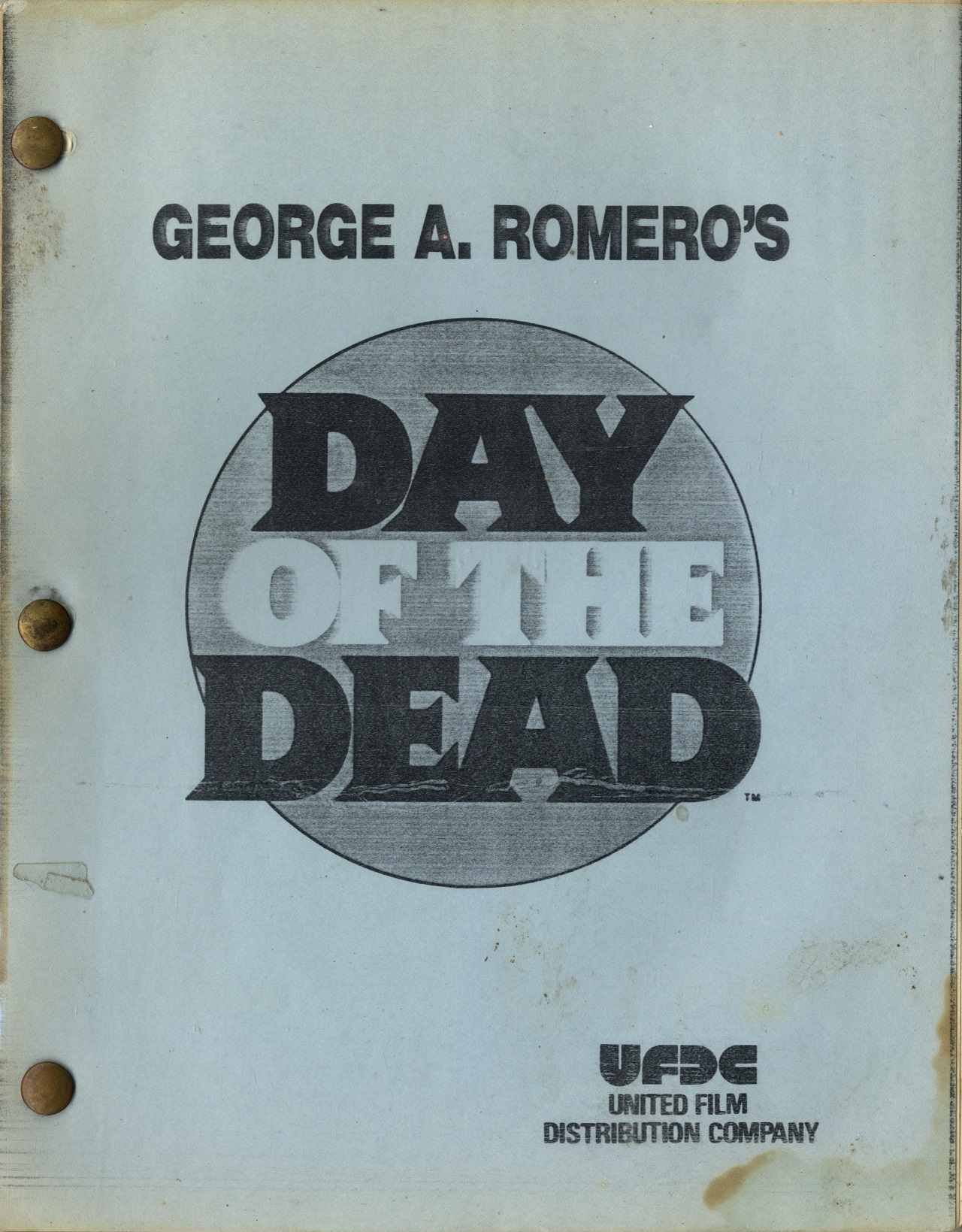 The third in George A. Romero’s “Living Dead” series, set on an army base that has been studying the zombies in an attempt to reverse their spread. Order on the base slowly collapses, and the survivors begin to fight each other. DAY OF THE DEAD is the third film in director George Romero’s series of groundbreaking zombie movies, preceded by NIGHT OF THE LIVING DEAD and DAWN OF THE DEAD, followed by DAY OF THE DEAD, LAND OF THE DEAD, DIARY OF THE DEAD, and SURVIVAL OF THE DEAD. Director Romero has declared DAY OF THE DEAD to be his “personal favorite” of the original trilogy.

The third of three script drafts, as Romero attempted to condense the film into budgetary restraints imposed on him by the studio. This third draft represents a drastic departure from the first two drafts, and would become the script used during shooting. Though it fared less well at the box office than its predecessors, it again gained traction both internationally and once it left theaters, and spawned the inevitable pop cultural references, including a 2005 semi-official half-prequel half-sequel “Day of the Dead 2: Contagium,” released by Taurus Entertainment Company, though no one from the original film was involved.

According to Wikipedia, “A total of five scripts were written as Romero wrestled with the film’s concepts and the budgetary constraints. The first draft was over 200 pages, which he later condensed to 122 pages. . . .This version was likely rejected because [the producers] felt it was too expensive for them to produce even with an R rating. Romero subsequently scaled down the scope of this script into a 165-page draft (often erroneously referred to as the original version), then condensed it again to a 104-page draft labeled the ‘second version, second draft’ in an unsuccessful final attempt to get the story within budget parameters. When this failed, he drastically altered the original story concept and ultimately produced a shooting draft that numbered only 88 pages.” The screenplay offered here is that final shooting draft.

Unlike the first two films in the trilogy which take place near Romero’s hometown of Pittsburgh, Pennsylania, DAY opens somewhere in South Florida, and most of the remainder of the film is supposed to take place in a vast underground bunker purportedly constructed at that location (though actually shot in an underground storage facility located outside of Pittsburgh). Where parts of DAWN are almost giddily comic, the tone of DAY is predominantly grim and serious.

Over the course of the trilogy, Romero’s female protagonists grow progressively stronger. Barbara, the female protagonist of NIGHT, is a comparatively weak character, virtually catatonic throughout most of that film. Fran, the protagonist of DAWN, is a television journalist who gradually acquires survival skills (how to use a rifle, how to fly a helicopter). Sarah (Lori Cardille), the protagonist of DAY, is a civilian doctor, caught between male chauvinist army personnel on one side and half-mad scientists on the other, clearly the most competent person in the movie. As a feminist action heroine, she has been compared to Ripley (Sigourney Weaver) in the ALIEN franchise.

The zombies have also progressed. In NIGHT and DAWN, they are essentially mindless – creatures of pure instinct. However, in DAY, we are introduced to a zombie named “Bub” who under the experimental tutelage of Dr. Logan – aka “Dr. Frankenstein” – has learned (or been conditioned to learn) some useful behaviors, e.g., respect and even affection for his teacher, and later – to the regret of fanatically nasty army commander, Captain Rhodes – how to fire a gun.

As described in the screenplay:

This is indeed the final shooting script, the one that Romero and his crew used to make the movie. However, Romero never followed his scripts slavishly. He did not like to storyboard his sequences. He was a filmmaker who enjoyed on-set improvisation, inspired by his locations and the people he worked with, always open to suggestions from his actors and other collaborators.

For example, in the opening zombie sequence shot in Ft. Myers, Florida, Romero adds non-scripted touches like a live alligator on the steps of a local bank and crabs crawling over a rotting corpse. The sequence, as filmed, is longer and considerably more detailed than the screenplay version.

One of the best sequences in the movie was entirely improvised, the one in which scientist Dr. Logan (Richard Liberty) teaches his zombie pupil Bub (Sherman Howard) how to use a walkman. At this point in the story the scientist and the zombie have learned to trust each other. The scientist carefully shows the zombie, wearing earbuds, how to press the buttons on the walkman, the zombie does so, and is shocked, almost delighted, to hear the strains of Beethoven’s “Ode to Joy.” Neither actor knew beforehand exactly what the other actor was going to do or how he would react.

The significance of DAY in the overall arc of Romero’s work is that for the first time the zombies (or at least one zombie) are more sympathetic than most of the humans.