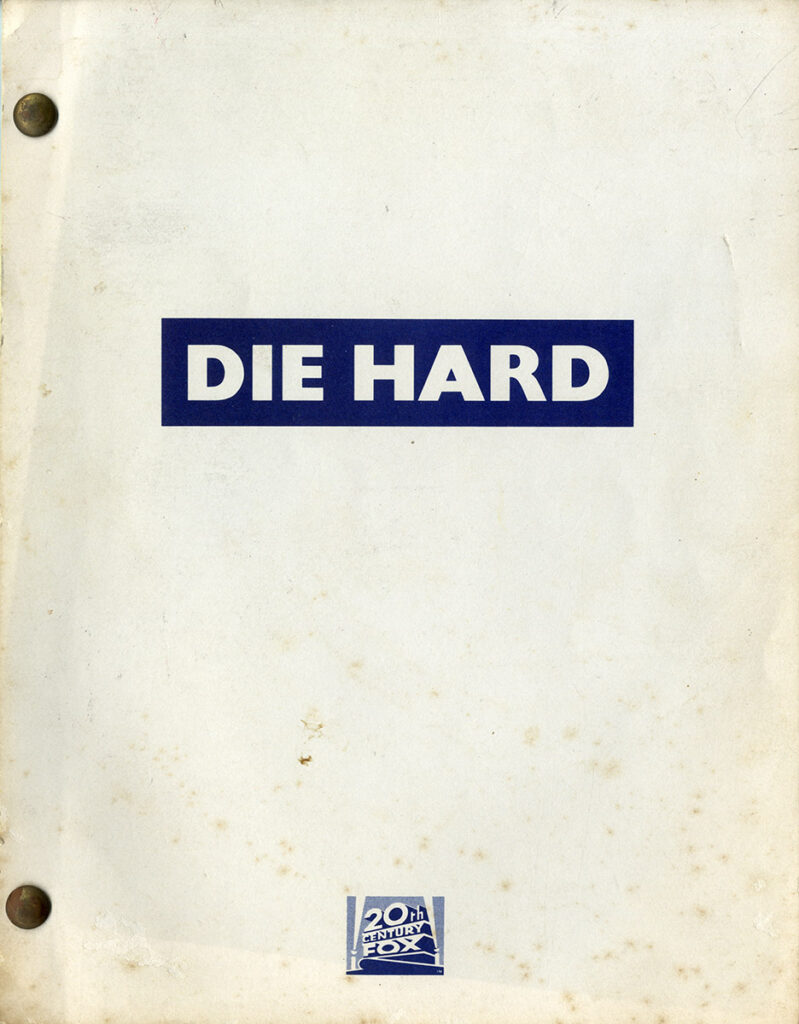 The much-imitated DIE HARD (1988) is rightfully considered the definitive action film of the late-1980s. Deftly combining action with comedy and suspense, it made a major star out of Bruce Willis who plays the film’s lead, a New York policeman named John McClane.

DIE HARD’s director, John McTiernan, had scored a major hit one year earlier with PREDATOR), a sci-fi/action thriller produced by the same team, Lawrence Gordon and Joel Silver, who produced DIE HARD. It was the maiden effort of screenwriter Jeb Stuart (adapting a novel by Roderick Thorp) who went on to co-write the screenplays of action thrillers like THE FUGITIVE and ANOTHER 48 HOURS. The screenplay’s co-writer, Steven E. de Souza, was a comparative veteran, responsible for co-writing the original 48 HOURS, who was brought in to polish and revise Stuart’s original scenario, and add more comedic elements. The revisions continued well into the shooting of the film. Appropriately enough for a film produced by Twentieth Century Fox, the film’s exteriors were shot at the Fox Plaza in Los Angeles’s Century City.

DIE HARD’s brilliantly constructed screenplay is rich with subtext, most of it, in one way or another, an attack on modernity. Almost all of the film’s story takes place in a skyscraper, a quintessential symbol of the modern world. (See, for example, J.G. Ballard’s novel, HIGH RISE.) However, the attacks on modernity begin in the script’s very first scene, which finds our hero, John McClane, aboard an airliner–he’s an old-fashioned kind of guy terrified by flying. Next, we find McClane riding in a limousine, hired by his wife’s corporation to chauffeur him to the office building where she works. Argyle, the young, black driver, tells McClane, “We got everything you need: CD, CB, TV, VHS, telephone, full bar,” all the accoutrements of the modern world.

In the meantime, we are introduced to another facet of the modern world–gender equality–here represented by McClane’s wife, Holly (Bonnie Bedelia), who is a high-ranking executive of the Nakatomi Corporation, the owners of the high rise who are having a Christmas party as the story unfolds. Not only did she leave her New York marriage to advance her career in Los Angeles; she no longer uses her husband’s last name–as McClane finds out when he tries to find her on the building’s automated directory (another artifact of the alienating modern world). Her boss, Mr. Takagi, played by the great James Shigeta, is benevolent enough, but he represents another facet of our modern era, the infiltration of American culture by foreigners, which is exemplified more malignantly by the movie’s bad guys, a mostly German group led by the cultured, intellectual, Hans Gruber (Alan Rickman). The essence of the story is the conflict between the evil technocratic Europeans invading the building to rob it (while posing as terrorists), and McClane, a one-man army who opposes them, old school cowboy-style, specifically identifying himself with Roy Rogers. Hence, McClane’s most famous line, “Yippee-ki-yay, motherfucker!“

While conservative in many respects, DIE HARD could be considered progressive in its sympathy for its working class and Black characters: Argyle the limo driver and, more significantly, Powell (Reginald VelJohnson), the Black middle-aged patrol cop who is McClane’s contact with the outside world, once the building is under siege.

On the other hand, the script is unabashedly conservative regarding what a police officer should be permitted to do:

TONY: You won’t hurt me.

MCCLANE: Yeah? Why not?

TONY: (smug) Because you are a policeman. There are rules for policemen.

MCCLANE: Yeah. My Captain keeps telling me the same thing.

(As he proceeds to pistol-whip the thug.)

This particular copy of the screenplay is divided into roughly two halves. The first half, consisting mainly of orange pages 10 to 54, dated 11/5/87, is nearly identical to what was actually filmed. The second half, light green pages 55 to 123, dated 11/4/87, is part of an earlier draft, with some significant differences from what appears in the completed film. Notably missing from this draft is one of the movie’s key scenes where McClane comes face-to-face with the villainous Gruber, who affects a perfect American accent and pretends to be one of the hostages in order to gain McClane’s trust (McClane sees right through him).

Also notably missing from the second half draft is the movie’s emphasis on how the villains disable the building’s security codes to break into a vault where valuable bonds are kept–the object of their invasion. A key part of their plan, not mentioned in this draft, is to trick the FBI into turning off the building’s electricity. Turning off the current disables a lock which is the last of the many safeguards protecting the vault. Also missing from this draft is the movie’s climactic set piece, where the villains lead the hostages onto the building’s roof, undermined with explosives set to go off as soon as rescue helicopters arrive, and how McClane saves the hostages from that fate.

All of the script’s Christmas imagery adds another level of complexity and resonance to what is indisputably a classic of the American action film.