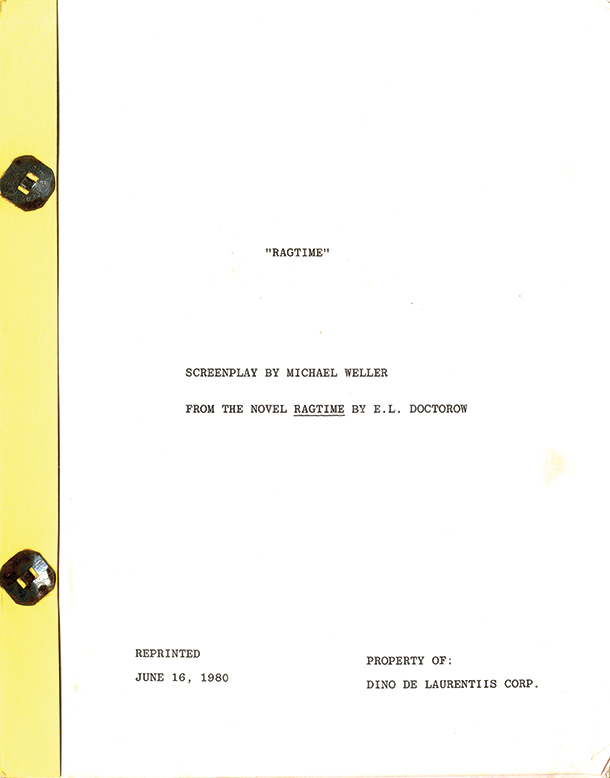 An important script for one of the most elaborate productions of the early 1980s, one of director Miloš Forman’s great achievements, in keeping with his 1975 classic One Flew Over the Cuckoo’s Nest. An unflinching look at the racial tensions that result when a young black pianist (Moses Gunn as Booker T. Washington) becomes embroiled in the lives of an upper class white family in New York City during the early 1900s.

RAGTIME was based on a best-selling novel by E.L. Doctorow (1931-2015). A panorama of American culture, set in the New York City area from 1902 until 1912, that mixes actual historical figures like Harry Houdini, Evelyn Nesbit, and Booker T. Washington, with fictional characters like the black piano-playing protagonist, Coalhouse Walker, Jr., Doctorow’s 1975 novel presented enormous challenges to any would-be adapters.

According to a New York Times article published in September 1976:

“[Producer] De Laurentiis hired Robert Altman, who had demonstrated his flair for controlling a sprawling narrative in ‘Nashville’, to direct ‘Ragtime’. Altman, in a burst of enthusiasm, immediately hired Joan Tewkesbury, author of ‘Thieves Like Us’ and ‘Nashville’, to write the screenplay. Since’ then, both Altman and Miss Tewkesbury have left the project, and now Doctorow himself, who succeeded Miss Tewkesbury as scenarist, has abandoned his effort to translate the elaborately plotted novel into a script of reasonable length, though he has been retained in an advisory capacity. So De Laurentiis, who recently hired Miloš Forman to replace Altman, is now in search of another screenwriter, and the question being asked by many Hollywood observers is, ‘Will “Ragtime” ever be made?'”

Eventually, the filmmakers hired playwright Michael Weller (“Moonchildren”) to write the screenplay. Weller had previously collaborated with director Forman on the screen version of HAIR. Weller’s RAGTIME screenplay, a model of condensation and adaptation, was filmed by Foreman, and ultimately received a 1982 Academy Award nomination for “Best Writing, Screenplay Based on Material from Another Medium.”

Apart from Coalhouse Walker, the novel’s principal characters are a wealthy New Rochelle family referred to simply as Father, Mother, Mother’s Younger Brother, Grandfather, and The Little Boy. The book begins as follows:

“In 1902 Father built a house at the crest of the Broadview Avenue hill in New Rochelle, New York.”

Weller’s screenplay begins in a movie house showing a newsreel/slide show of [then-] contemporary public figures like President Teddy Roosevelt having dinner with Booker T. Washington, magician Harry Houdini on a national tour with his mother, and famous architect Stanford White unveiling a nude statue, followed by the title card, “FORMER CHORUS GIRL EVELYN NESBITT THAW SAYS, ‘I DID NOT MODEL FOR NUDE STATUE'” – all of which is accompanied by Coalhouse Walker playing the movie house piano.

Soon we are introduced to the family (Father, Mother, et al.), a black baby abandoned in their garden, Sarah (Debbie Allen), the depressed mother of the child – whom Mother (Mary Steenbergen) elects to take in along with the baby – and Sarah’s persistent suitor, Coalhouse Walker (Howard Rollins). Things get serious when Walker’s Model-T Ford is vandalized by racist firemen, Walker embarks on a justice-seeking vendetta against the Fire Department, Younger Brother (Brad Dourif) becomes involved with the scandalous Evelyn Nesbit (Elizabeth McGovern) and, radicalized, ends up joining Walker’s impromptu black revolution. There is also a Jewish immigrant artist named Tateh (Mandy Patinkin) who in the course of the narrative, interweaving all of the foregoing characters, evolves from cutting out paper silhouettes for a living to making motion pictures.

As one might surmise, the principal themes of the book, screenplay, and movie are class, feminism, and race. Forman told screenwriter Weller that, rather than attempting to dramatize all of the book’s many characters and subplots, he wanted to focus on the story of the black revolutionary Coalhouse Walker – thereby emphasizing the novel’s racial themes even more.

The differences between Weller’s screenplay and Foreman’s completed film are mainly a matter of shortening or eliminating some lines, and transposing or omitting certain shots and scenes. For example, in the closing montage, Foreman eliminates the shot of Younger Brother executed by the Mexican firing squad (too much of a downer). He also omits the last shot of Walker closing his eyes, returning instead to the image of Evelyn Nesbit and her partner dancing.

That same image – Evelyn and her partner dancing a waltz against an abstract background (accompanied by Randy Newman’s beautiful score) – has also been transposed to the beginning of the film, preceding the opening montage described in the screenplay, and plays under the movie’s opening credits. Thus, Foreman’s movie opens and closes with the same abstract image.

A scene introducing the famous anarchist Emma Goldman and having her engage in a lengthy dialogue with Evelyn Nesbit was shot, but eliminated from the completed film. It is included as an extra on the Paramount DVD.