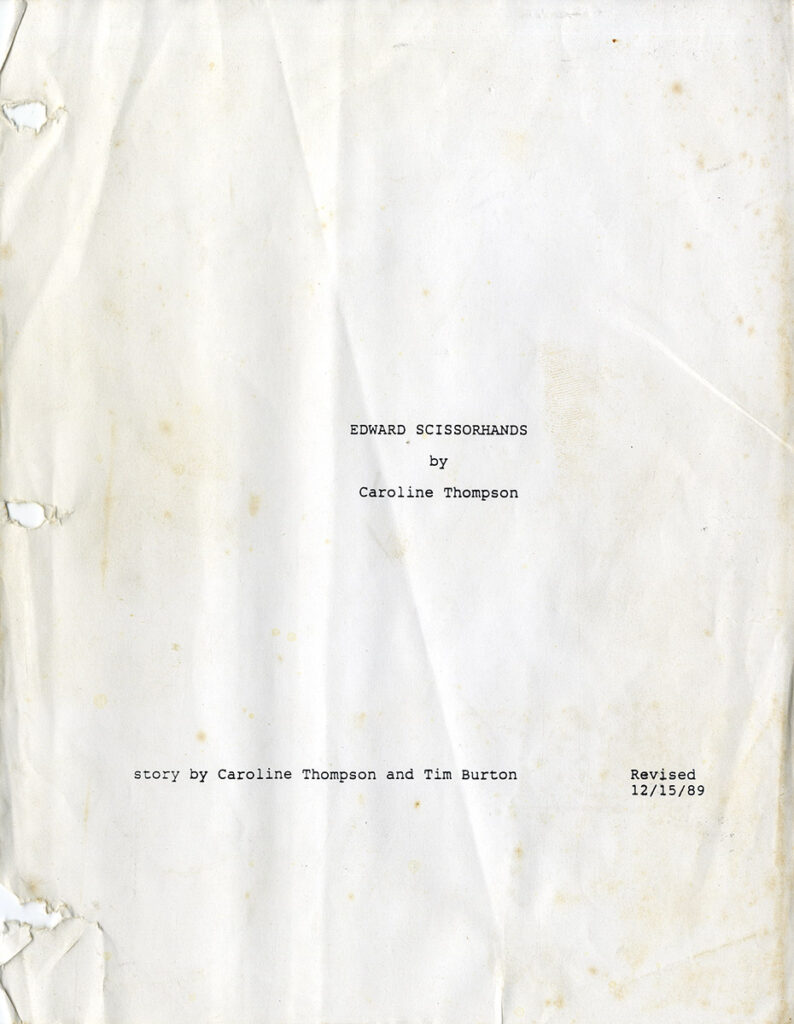 Tim Burton’s second feature, BEETLEJUICE (1988), heralded the arrival of a filmmaker with a singular visual style and a distinctively macabre sense of humor. His third feature, EDWARD SCISSORHANDS (1990), showed he was also a filmmaker with heart. With a story co-written by Burton, inspired by his own misfit adolescence, it remains his most personal movie to date.

EDWARD SCISSORHANDS’ screenplay is the work of Caroline Thompson, based on a story that Burton invited Thompson to co-write with him after being impressed by her short novel First Born about an aborted fetus that returns to life. The outstanding quality of her EDWARD SCISSORHANDS screenplay led to many subsequent script jobs, including THE NIGHTMARE BEFORE CHRISTMAS (1993) and THE CORPSE BRIDE (2005)–both for Burton–THE ADDAMS FAMILY (Barry Sonnenfeld, 1991), THE SECRET GARDEN (Agnieszka Holland, 1993), BLACK BEAUTY (1994), which she directed herself, and WELCOME TO MARWEN (Robert Zemeckis, 2018). She also helped create a 2005 stage ballet version of EDWARD SCISSORHANDS with director/choreographer Matthew Bourne.

The title character, Edwards Scissorhands, is an artificial human created by an eccentric Inventor, played in the movie by Vincent Price, a character who synthesizes aspects of PINOCCHIO’s Geppetto and FRANKENSTEIN’s Dr. Frankenstein, and the story of EDWARD SCISSORHANDS recalls both of those classic works. Unfortunately, the Inventor dies before Edward (Johnny Depp) is complete, leaving him with pairs of scissors for hands. He is discovered living alone in the Inventor’s castle by a compassionate Avon Lady (Diane Weist) who brings him home with her to the suburbs.

This archive of EDWARDS SCISSORHANDS materials includes the following:

Thompson’s 12/15/89 draft begins, as the movie does, with a framing sequence, an elderly woman telling the story of Edward to her granddaughter. The woman turns out to be an older version of Edward’s great love, Kim (Winona Ryder), the teenaged daughter of the Avon Lady who brought Edward home with her.

This draft is fairly close to what was actually filmed with some minor differences, particularly with regard to Edward’s creation. This draft describes the Inventor actually making skin, a brain, a heart, and so on. The movie merely implies how Edward was created, beginning with the Inventor looking at a human-like component of his cooking-making machinery; then later we see the turning pages of a book with the Inventor’s drawings illustrating the gradual evolution of the cookie-cutting mechanism into something more and more human.

In this draft, Edward talks a lot more than he does in the movie. Apparently, director Burton, in collaboration with actor Johnny Depp, came to realize that Edward’s mute reactions were generally more effective than spoken dialogue. The movie also omits Edward’s singing (although Depp would eventually play the singing lead of Burton’s SWEENEY TODD). This was the first of eight films Burton would make with Depp.

The character of Joyce, the neighborhood sexpot, played in the movie by Kathy Baker, has been slightly altered. In this draft, she has a husband. In the movie, she has no spouse, and her marital status (divorced?) remains uncertain.

The movie often elaborates visually on what is described in the screenplay. For example, in the movie, the bed that Edward is given to sleep on is a waterbed which Edward (naturally) thinks is strange to begin with; and when daughter Kim sees him for the first time she screams, which causes Edward to panic and accidentally puncture the waterbed with his shear-like hands.

The dialogue of the Avon Lady’s husband Bill, played by Alan Arkin, tends to differ from what is written, probably because Arkin is an actor who likes to improvise. The movie omits a scene in this draft where Bill attempts to show Edward how to play pool. The movie also omits some scenes in this draft dealing with Edward’s growing celebrity, for example, a scene in a hospital where he is hounded by journalists.

The draft ends, as the film does, with Edward alone in his castle carving ice sculptures. The entire film, as written by Thompson, maintains a careful balance between lyrical fairytale, gothic horror (the Frankenstein elements), and a satire of American suburban life.

Unlike the 12/15/89 draft, Thompson’s revised screenplay begins with a description of the movie’s credit sequence–SEVERAL SNOWFLAKE PAPER WEIGHTS with snow swirling inside them, the first one containing a log cabin, the next a horse and sleigh, then a snowman, and so on. While this has the same general feeling as the movie’s actual credit sequence, it is not, in fact, what we see in the film, which begins with imagery of the Inventor’s gothic castle and his cookie-manufacturing machinery, foreshadowing Edward’s creation.

When Peg the kind Avon Lady first encounters Edward in this draft, “his clothes are in tatters, hanging in threads from his thin body.” He is not wearing the signature black leather punk quasi-bondage outfit that he wears in the movie.

In this draft, the scene of the Inventor (Vincent Price) educating his new creation, Edward (Johnny Depp), by reading to him from a book of etiquette is immediately followed by the scene in which the Inventor dies from a sudden heart attack, just before he can replace Edward’s scissor limbs with real hands. In the movie, the flashback scene of the Inventor dying comes much later, toward the film’s conclusion.

One scene written for this draft (green pages) that never made it into the completed film has the family playing “Twister.” (It replaces the pool playing scene in the 12/15/89 draft.) It’s the first time that Edward and Kim (Winona Ryder) connect. In another scene that didn’t make it into the completed film, Edward makes a celebrity appearance at the opening of a shopping mall store called Cloth World.

In this draft, Edward still talks significantly more than he does in the film. In a brief scene omitted from the movie, Kim asks Edward–who has proven to be a master hair stylist–if he would cut her hair, and he replies, “Your hair is perfect just the way it is” (everything about her is perfect to him). In this draft, Peg the Avon Lady is not quite the paragon of decency and heart embodied so movingly by Diane Wiest in the film. In a moment thankfully omitted from the movie, she even regrets taking Edward into her home when “all I tried to do was help him.”

The ending of the script and film overtly recalls Frankenstein, with the neighbors storming Edward’s castle like the angry villagers in Universal’s Frankenstein movies. However, unlike Frankenstein, this tale has a happy ending. Kim convinces the mob that Edward is dead while, in fact, he remains in his castle, alone and eternally alive, using his scissor hands to carve beautiful sculptures out of ice.