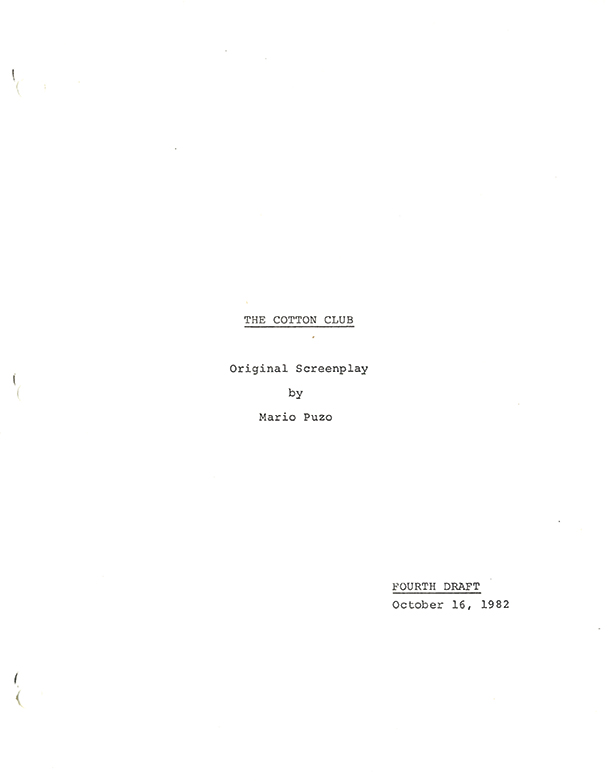 Producer and studio executive Robert Evans purchased the rights to Jim Haskins’ book, The Cotton Club: A Pictorial and Social History of the Most Famous Symbol of the Jazz Era, in order to direct a movie about the legendary club himself. It would have been Evans’ directorial debut, and he commissioned several screenplays by Godfather author Mario Puzo (1920-1999) and reportedly spent more than $13 million in pre-production costs, before concluding the only way he could get the film made was by hiring Francis Coppola to direct it (the film would ultimately cost $40 million). This is Puzo’s “Fourth Draft Screenplay”, written before Coppola was brought onto the project.

Puzo’s draft is significantly different from the screenplay by William Kennedy (“Ironweed”) and Francis Coppola that was eventually filmed (see below). Puzo’s screenplay begins in December 1933. The Kennedy/Coppola screenplay starts several years earlier in 1928. While both screenplays explore the intersection of real-life black musicians who played at the Club and gangsters (some real-life, like Dutch Schultz, some fictional) who were associated with the establishment, the two principal characters of the Kennedy/Coppola screenplay, white cornet player “Dixie” Dwyer and black dancer “Sandman” Williams, do not appear in Puzo’s script.

Not surprisingly, Puzo’s version has a more novelistic feel. His script’s protagonist is the fictional owner of the Club, Jake Stella. In the Coppola film, Jake’s character is gone, replaced by Owney Madden, who was the real-life owner of the Club in its prime. Puzo’s version flashes back to World War I, where we see how the fictional white Jake met his fictional black partner, ST Smith, and goes on to show how these two men purportedly created the Club.

Puzo’s dialogue tends to sound more than a little Godfather-esque. Example: when Jake talks about introducing ST to his gangster brother, Easy, for whom ST has a proposition:

If you say yes, will he say yes?

Then what good are you?

I keep you from getting killed when

ST’s proposition is to open a club in Harlem featuring all the black musical talent that thrives there. The kicker – it can serve as a front for the gangsters’ numbers racket in that neighborhood, a way for them to get their foot in that particular door. And so, the Cotton Club is born. (Coppola’s version omits all of this backstory.)

One catch – although the musical talent is black, the customers will be “whites only”.

The segregation of the Club, a historical fact, is also a plot point in Coppola’s version. Another historical fact, reflecting the racism of the era, is that all of the Club’s female dancers had to be light-skinned. The real-life black musicians featured in Puzo’s celebrity-heavy script include Duke Ellington, Louis Armstrong, Cab Calloway, Fats Waller, Ethel Waters, and the Nicholas Brothers. The chief mobster antagonist in both the Puzo version and the Coppola version is rival numbers racketeer, Dutch Schultz.

The gangster action in Puzo’s script is also more than a little Godfather-esque. For example, when Jake wants Cab Calloway to take over as band leader at the Cotton Club (because Duke Ellington is going on tour for six months), and Calloway’s manager tells Jake that isn’t possible due to Calloway’s exclusive contract with the Plantation Club, Jake’s thugs smash up the Plantation Club with axes and crowbars.

An interesting side note for Mario Puzo fans – Hyman Roth, not a real person but a character from Puzo’s GODFATHER II, makes a cameo appearance in Puzo’s COTTON CLUB script, hobnobbing with Lucky Luciano, Frank Costello, and other famous kingpins of organized crime.

Notwithstanding its effectiveness as a gangster story inspired by real people and events, one can see why producer Evans was dissatisfied with Puzo’s script and wanted to start over from scratch. Given that the film was supposed to be about the Cotton Club, there are too few scenes set in the Club, and too few scenes involving music. Even more problematic for a story that should be about black musical talent, most of Puzo’s principal characters are white mobsters, and the chief black character, ST, is little more than a sidekick.

Coppola’s rewritten version fixes all of this by foregrounding the music, by having two leads, one black and one white, of equal prominence, and by making both of them musicians.

Producer Robert Evans had already commissioned numerous screenplay drafts for THE COTTON CLUB, including several by Mario Puzo, before hiring William Kennedy (the Pulitzer Prize winning of author of “Ironweed”) and Francis Coppola (1939-present) to write this version. After roughly five years developing the project, which Evans himself had planned to direct, he ultimately awarded the directing job to Coppola.

Though Coppola is best known for his direction of a gangster epic, the classic GODFATHER trilogy, the writer/director had a longstanding interest in music and the musical genre, based in part on his growing up with a musician father. Following his direction of two pure movie musicals, FINIAN’S RAINBOW (1968) and ONE FROM THE HEART (1981), what Coppola chose to do with THE COTTON CLUB – surely with producer Evans’ approval – was to create a blend of the musical and gangster genres. The result is a film where it is uncertain whether the musical numbers are a background for the gangster material, or the gangster material is a background for the elaborate musical numbers.

Jettisoning entirely the plotline of Puzo’s screenplay drafts, the Kennedy/Coppola screenplay has two protagonists with two parallel storylines, a white jazz cornet player, “Dixie” Dwyer (Richard Gere), inspired by the real-life “Bix” Beiderbecke, and a black tap dancer, “Sandman” Williams (Gregory Hines). Notably, Gere does all of his own cornet playing in the film.

Both of the script’s parallel storylines are essentially romantic triangles. In the white Dixie Dwyer storyline, Dixie loves Vera (Diane Lane), a singer and later nightclub owner inspired by the real-life “Texas” Guinan. Vera also loves Dixie, but has to keep their affair secret because she is the kept woman of notorious real-life racketeer and madman, Dutch Schultz (James Remar). In the black Sandman Williams storyline, Sandman loves a Cotton Club dancer named Lila Rose (Lonette McKee), but they are kept apart by Lila’s career ambitions – including wanting to appear on Broadway while passing for white.

The Kennedy/Coppola script also gives a prominent role to the Club’s real-life owner and manager, Owney Madden (Bob Hoskins), and his joined-at-the-hip right-hand man, Frenchy Demange (Fred Gwynne) – virtually a married couple in their own right.

The opening of the screenplay describes a montage (presumably stock footage) showing life in the Club’s Harlem neighborhood from 1905 to roughly 1929. The completed film skips all of that, beginning directly with a musical number, emphasizing the legs and torsos of the Cotton Club’s tap-dancing chorus girls, which is intercut with the movie’s opening credits.

We see both main characters at the beginning of their careers. Cornet player Dixie’s musical career is jumpstarted when he saves Dutch Schultz and his moll, Vera, from an attempted assassination by bomb. As a result, Dixie is also able to get his little brother Vincent (Nicolas Cage) a job as one of Dutch’s hoods. (Their Irish dance instructor mother, Tish, is played by the great Gwen Verdon). In the parallel story, a dance routine by Sandman and his brother Clay (Maurice Hines) secures them a spot on-stage at the Club.

The dialogue by Kennedy and Coppola is at least as colorful as Puzo’s:

What do they call you?

Nobody calls me anything.

Not even your mother?

I never had a mother. They found me

in a garbage pail.

The Kennedy/Coppola script is as full of celebrity cameos as the Puzo version. At one point, Dixie meets silent film star Gloria Swanson who, struck by his looks, tells him he could get a job in Hollywood. And later in the screenplay, he does. In this respect, Dixie’s story echoes that of real-life movie star and gangster associate, George Raft. Real-life musical celebrities like Duke Ellington and Cab Calloway are also prominent in this script.

Coppola likes to end his most ambitious projects with a big montage sequence. THE GODFATHER ends with an elaborate Church baptism that is intercut with a series of shots showing the Corleone family murdering its mobster enemies. APOCALYPSE NOW! ends similarly with a montage sequence in which the death of Colonel Kurtz (Marlon Brando) is intercut with the ceremonial sacrifice of a bull. THE COTTON CLUB screenplay continues this pattern, concluding with a montage sequence that intercuts the machine-gunning of Dutch Schultz and his associates with shots of Sandman triumphantly tap-dancing on the Cotton Club stage.

This particular draft, labeled “Final Script”, is, in fact, quite close to the completed film. However, what a reading of the script does not convey is to what degree this is a musical film, with musical numbers being performed or heard in almost every sequence.

Coppola’s original cut of the movie ran approximately 25 minutes longer than the version that was ultimately released. More than three decades later, Coppola spent $500,000 of his own money to restore that “Directors Cut”, referred to as THE COTTON CLUB ENCORE, which premiered at the Telluride Film Festival in 2017.