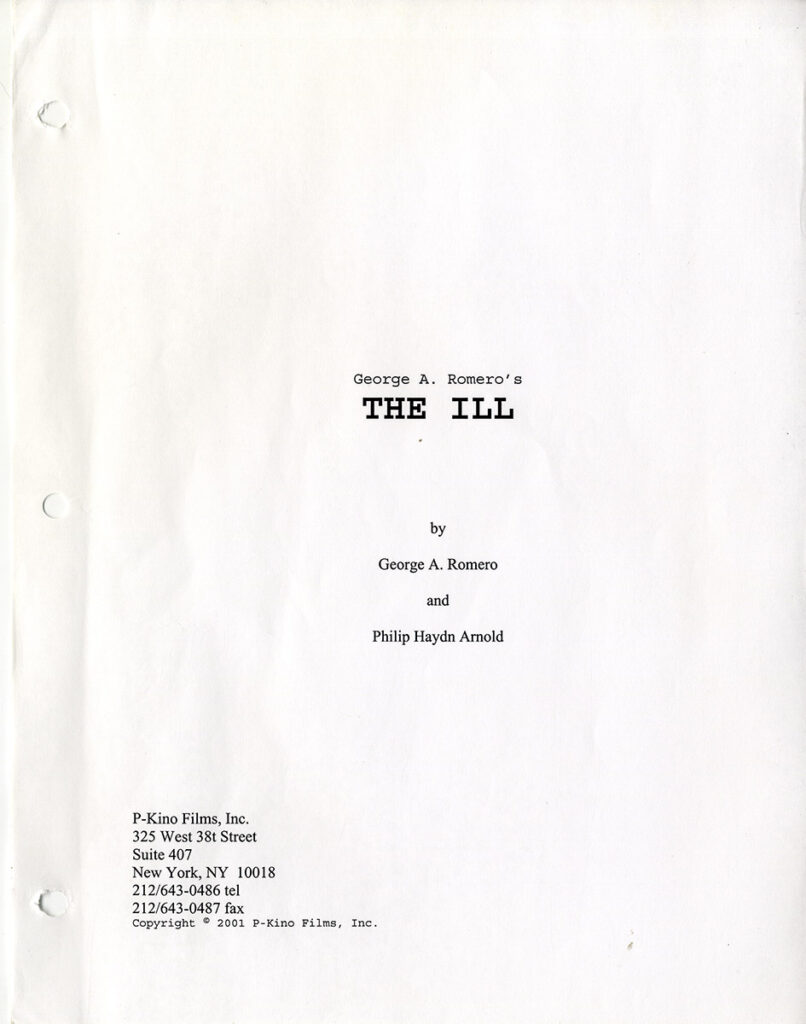 George Romero’s THE ILL (2001) Screenplay by George A. Romero and Philip Haydn Arnold

An unproduced George Romero vampire film which could have been one of his great contributions to the history of horror movies.

New York City-born George A. Romero (1940-2017) is best known for the series of groundbreaking zombie films that he wrote and directed, beginning with 1968’s NIGHT OF THE LIVING DEAD, followed by DAWN OF THE DEAD, DAY OF THE DEAD, LAND OF THE DEAD, DIARY OF THE DEAD and SURVIVAL OF THE DEAD.

However, Romero also directed films in other horror subgenres, including the vampire film MARTIN (1978) and the plague film THE CRAZIES (1973). His unproduced 2001 screenplay, THE ILL, co-written by Philip Haydn Arnold, is a horror film and a mystery that combines elements of the vampire and plague film subgenres.

THE ILL takes place at a fictitious New England university, Wentworth College, where the young protagonists are facing an outbreak of killing and disease that exhibits all the symptoms of classic vampirism. The chief mystery is who is the vampire?

The main character is a college girl named Mattie, an orphan of Romanian descent. She is also, significantly, a virgin who fears that she might unknowingly be the vampire herself. Others investigating the mystery include Mattie’s boyfriend, Cal, and a young history professor, an Episcopalian Vicar by the name of Hilton. A cover letter attached to the screenplay indicates, “We are thinking of Asia Argento to play Mattie, Ryan Phillipe for Cal, Linda Fiorentino for Dr. Hingslaven, and Christian Slater for Hilton.”

HILTON
As a man of faith, I believe in the power of good. But for good to exist,
we must too believe in evil. Vampires. Reviled as man’s natural enemy,
yet endowed with a deep sexual potency.

The screenplay begins with a dream sequence:

An eighteen year old virginal GIRL in a white dress—who resembles Mattie—floats
past, escorted by a cadre of NUNS. A fleeting glimpse of the back of a MAN.
. . . .
RED bleeds onto the screen, smothering the image.

Mattie wakes up from her nightmare with a strange red tattoo on her arm. This is the first of many images of “body horror” that recur throughout Romero’s screenplay.

Since we don’t learn the identity of the vampire until the story’s final act, the screenplay focuses on the vampire’s effects on its victims — the emaciated appearance, the convulsions, the bleeding from the eyes. The equation of vampirism with disease or plague-like symptoms goes back at least as far as F.W. Murnau’s NOSFERATU (1922). One of the story’s main characters is a female scientist, Dr. Hingslaven, from the Centers for Disease Control. One of the vampire’s victims is the college dean who is gay (in his youth, he had an affair with a Priest), maybe the only overtly LGBTQ character in any of Romero’s movies. The screenplay is also noteworthy for its heavy use of Catholic imagery (although one of the vampire’s first victims is a Jewish girl).

Unlike the traditional movie vampire, Romero’s vampire doesn’t draw blood from its victims by biting their necks. Instead, it squeezes them like a dishrag until they bleed from their mouths and eyes.

Clearly, Romero’s movie would have been gorier than the traditional vampire film. Insofar as Romero’s previous “vampire” movie, MARTIN, was non-supernatural in nature (the protagonist only thought that he was a vampire), THE ILL, if it had been made, would have been Romero’s first and only true vampire film — a worthy companion piece to his classic zombie tales.