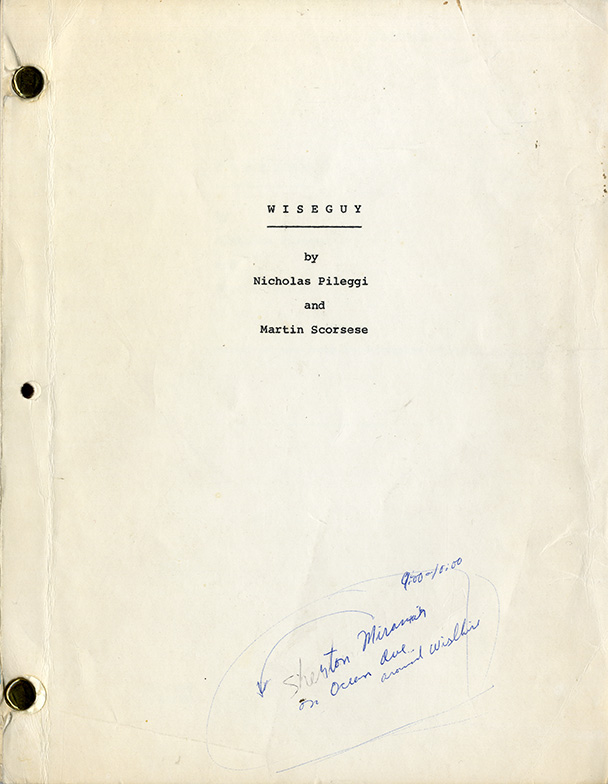 Scarce script for one of the classic gangster films, and one of director Martin Scorsese’s masterpieces.

GOODFELLAS was adapted by Scorsese and Nicholas Pileggi from Pileggi’s 1986 book Wiseguy: A Life in the Mafia Family, which told the allegedly factual story of Mafia mobster-turned-informant Henry Hill, played by Ray Liotta in the movie. Considered one of the greatest of all films in the crime genre, it was nominated for six Academy Awards (winning Best Supporting Actor for Joe Pesci in the role of Tommy), and in 2000 was selected for preservation in the National Film Registry by the United States Library of Congress as a work deemed “culturally, historically, and aesthetically significant.”

One of the most striking aspects of the GOODFELLAS screenplay and film is their use of voiceover narration (by Ray Liotta as Henry). Some films — Ridley Scott’s BLADE RUNNER is a good example — add narration at the last minute, usually at the insistence of a studio, in order to clarify for the audience a hard-to-follow plot.

However, in the case of GOODFELLAS the protagonist’s narration sets the tone of the movie and is arguably its very heart and soul. Scorsese later said he was inspired by the voiceover narration of Francois Truffaut’s JULES AND JIM (1962), and that he wanted his film to employ “all the basic tricks of the [French] New Wave.” Scorsese had previously used narration to outstanding effect in TAXI DRIVER (1976), and would do so again in films like THE AGE OF INNOCENCE (1993), CASINO (1995), and THE WOLF OF WALL STREET (2013).

Scorsese also said that Henry Hill’s language, the particular way he talked and described things, was one of the principal things that attracted him to this project. To make things even more delightfully complicated in GOODFELLAS, as soon as Henry’s girlfriend Karen, played by Lorraine Bracco, enters the story (at page 31 of this script), we begin getting voiceovers from her as well.

The main differences between this nearly final screenplay draft and the completed film have to do with the ordering of sequences and the elaboration of the movie’s dialogue. The screenplay opens in 1970 in a Queens, New York, cocktail lounge where Tommy and his pals Henry and Jimmy (played in the film by Robert De Niro) are being baited by an older hood by the name of Billy Batts. This ultimately leads to Batts getting his head bashed in by Tommy and Jimmy, who wrap the bloody body in a mattress cover and deposit it in Henry’s trunk. But before they can get rid of the body, they have to get a shovel at the house of Tommy’s mother, who insists they all have something to eat before leaving (food is a major motif in this story).

Later, as they are driving through the dark, they hear a disturbing thumping sound — it’s Batts who is still alive in Henry’s trunk. As they open the trunk and use the shovel to make sure Batts is dead for good, we freeze-frame on Henry’s face and hear the first line of his voiceover narration:

“As far back as I can remember, I always wanted to be a gangster.”

The opening of the movie omits almost all of the above — the scene in the cocktail lounge, the scene at Tommy’s mother’s house — and begins with Henry, Tommy, and Jimmy in the car hearing the thumping in the trunk that leads to the freeze frame and first line of Henry’s narration as scripted. However, the scenes that precede that moment have been transferred to the middle of the film where they chronologically belong.

As for the dialogue, Scorsese and his cast went through two weeks of rehearsal where the cast was encouraged to improvise around the scripted dialogue, and everything they said was transcribed. Scorsese then went through the transcribed improvisations and incorporated all the best material into a finalized screenplay which was followed to the letter during shooting. What is arguably the movie’s most memorable scene — Joe Pesci as Tommy threateningly asking Henry, “How am I funny? Am I a clown? Do I amuse you?” — is something that came out of those improvised rehearsals. Almost every scene in the script has been elaborated upon in this way.

Another significant bit of dialogue that was added between this screenplay draft and the completed film occurs when Henry (as a boy) goes through his first arrest and courtroom appearance, and Jimmy (De Niro) tells him after it’s all over, “I’m proud of you … You learned the two greatest things in life. Never rat on your friends. Always keep your mouth shut.” Those lines prove prophetic in that Henry will eventually inform on his friends in order to avoid being killed by them.

The screenplay divides neatly into two halves. The first half shows Henry’s rise in the Mafia and all the perps, the power and respect, the freedom and material benefits, that go along with being a “wiseguy” or “goodfella.” The second half shows Henry’s fall — tied to use of cocaine and other drugs — but inevitable in any event, as everyone becomes gradually more and more manic and paranoid, and “friends” start murdering each other.

The screenplay and the film end identically with Henry and his family in the FBI witness protection program, and Henry telling us, the audience, “I get to live the rest of my life like a schnook.”