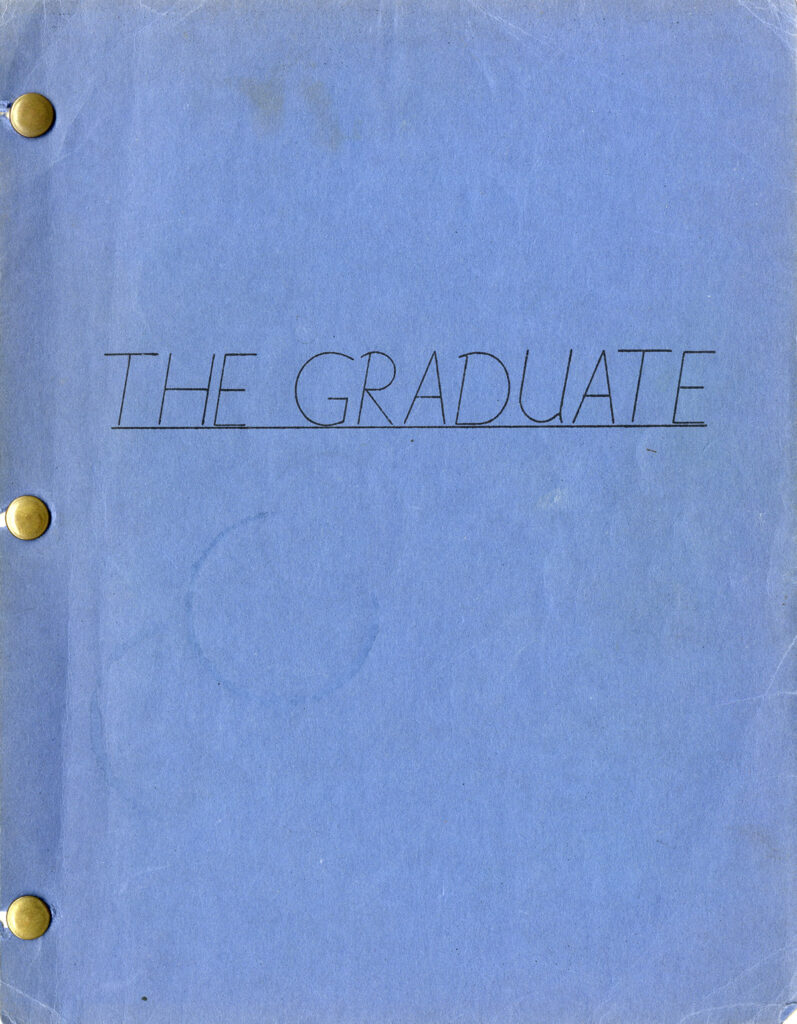 Mixing comedy, romance, and social satire, THE GRADUATE was one of the most iconic and beloved films of its era, a spectacular box-office success, and ranked by the American Film Institute in 2007 as the 17th greatest American film of all-time.

Director Mike Nichols (1931-2014) achieved his initial acclaim in the late 1950s as half of the groundbreaking comedy sketch duo, Mike Nichols and Elaine May. After the professional breakup of Nichols & May, Nichols turned successfully to stage directing and later, the cinema. THE GRADUATE was Nichols’ second feature film, following his adaptation of the Edward Albee drama, WHO’S AFRAID OF VIRGINIA WOOLF? (1966), and it earned him the 1967 Academy Award for Best Director.

THE GRADUATE’s Academy Award-nominated screenplay was the work of two very different writers. Georgia-born Calder Willingham (1922-1995) was a veteran novelist and screenwriter, having previously collaborated on the screenplays of THE STRANGE ONE (based on his novel – 1957), PATHS OF GLORY (1957), THE BRIDGE ON THE RIVER KWAI (1957), THE VIKINGS (1958), and ONE-EYED JACKS (1961) — all dramas. Buck Henry (1930-2020), on the other hand, had never written a major screenplay before – his background was in improv comedy — but he was Mike Nichols’ personal choice to adapt Charles Webb’s novel, and he went on to a highly successful screenwriting career that included, among many others, Nichols’ CATCH 22 (1970) and THE DAY OF THE DOLPHIN (1973), and the Academy Award-nominated screenplay of HEAVEN CAN WAIT (1978), which he co-wrote and co-directed with Warren Beatty.

In retrospect, one has to wonder why THE GRADUATE, a movie about the alienation of an affluent white male college student, achieved such universal popularity? Part of the answer lies in the movie’s simple storyline, which is pure wish fulfillment — a confused virginal 21-year-old (Dustin Hoffman) loses his innocence to a sexy older married woman (Anne Bancroft), then finds true love in the arms of her daughter, the beautiful girl next door (Katherine Ross).

The style of the film is half Frank Capra (’30s romantic comedy), half Michelangelo Antonioni (’60s art house alienation). The cultural issues that were tearing the country apart at the time of the film’s release are mostly implicit — there is no visible drug use apart from the pervasive alcoholism of the older generation; we see no long-haired hippies other than some of the background extras in the Berkeley sequence; there is no reference to the political upheavals of the time apart from the Berkeley landlord asking whether our hero, Benjamin, is “one of those outside agitators,” and the only oblique reference to the Vietnam War is in one of the Simon & Garfunkel song lyrics played over a Nichols montage (“Generals order their soldiers to kill“). Yet the film’s depiction of the generational divide is clear and unmistakable — grownups are uniformly cynical and corrupt, while Benjamin and his girlfriend, Elaine, are innocent tabulae rasae, rejecting the “plastic” values of their elders, and representing some kind of hope for an undefined future.

The differences between this Final Draft screenplay and the released movie are minimal. The biggest difference is the screenplay’s opening sequence — Benjamin speaking at his graduation, stumbling over the portion of his speech relating to purpose, “The purpose, my fellow graduates — the purpose is — ” (unable to complete the thought). This sequence was omitted from the completed film, which begins with Benjamin arriving in Los Angeles via plane, while the soundtrack plays Simon & Garfunkel’s “The Sound of Silence.” The sequence in the third act where Benjamin drives to Northern California has extensive voiceovers in the script representing what Benjamin is thinking — not unlike Janet Leigh’s driving voiceovers in PSYCHO — that were eliminated from the film’s final cut.

Otherwise, the main differences between the screenplay and the film are matters of mise-en-scène. The pervasive water and glass imagery which is implicit in the screenplay (e.g., the scene of Benjamin in a skin diving outfit sinking to the bottom of the family pool, Benjamin pounding on the glass at Elaine’s wedding) is more fully elaborated in the movie, where the first shot we see of Benjamin at home places him in tight widescreen close-up in front of a glass aquarium containing angel fish and a tiny bubbling frogman. The screenplay’s dialogue, however, is repeated in the film virtually verbatim.

As Andrew Sarris pointed out, the strongest scenes in Mike Nichols’ films are man/woman dialogues that recall his comedy routines with Elaine May. Thus, we have the George & Martha scenes in WHO’S AFRAID OF VIRGINIA WOOLF? and — four decades later — Al Pacino and Meryl Streep in ANGELS IN AMERICA, Nichols’ last great film. THE GRADUATE is no exception to the rule — its best written and acted scenes are those between Dustin Hoffman as Benjamin and Anne Bancroft as his older lover, Mrs. Robinson, and the screenplay and film inevitably lose some of their steam once Benjamin and Mrs. Robinson are no longer an item.

For the most part, this Final Draft screenplay is a blueprint for the completed movie. Even the film’s montage sequences are carefully scripted. Though director Nichols receives no screenplay credit, some of the film’s best visual and narrative ideas have been attributed to him, e.g., the decision to have Benjamin escape with Elaine after her wedding ceremony is completed (MRS. ROBINSON: Elaine — it’s too late. ELAINE: Not for me.) — a departure from Webb’s original novel.

Apart from its entertainment value, THE GRADUATE is a wonderful time-capsule screenplay and film that beautifully captures the look, feel, and sound of Los Angeles and Bay Area California in the late 1960s.

The script’s pagination indicates that pages 60-62,64,68,88-92,148,156-161 were omitted from this draft. The script, of course, is complete; this is simply an artifact of the pagination changing as the script was revised.