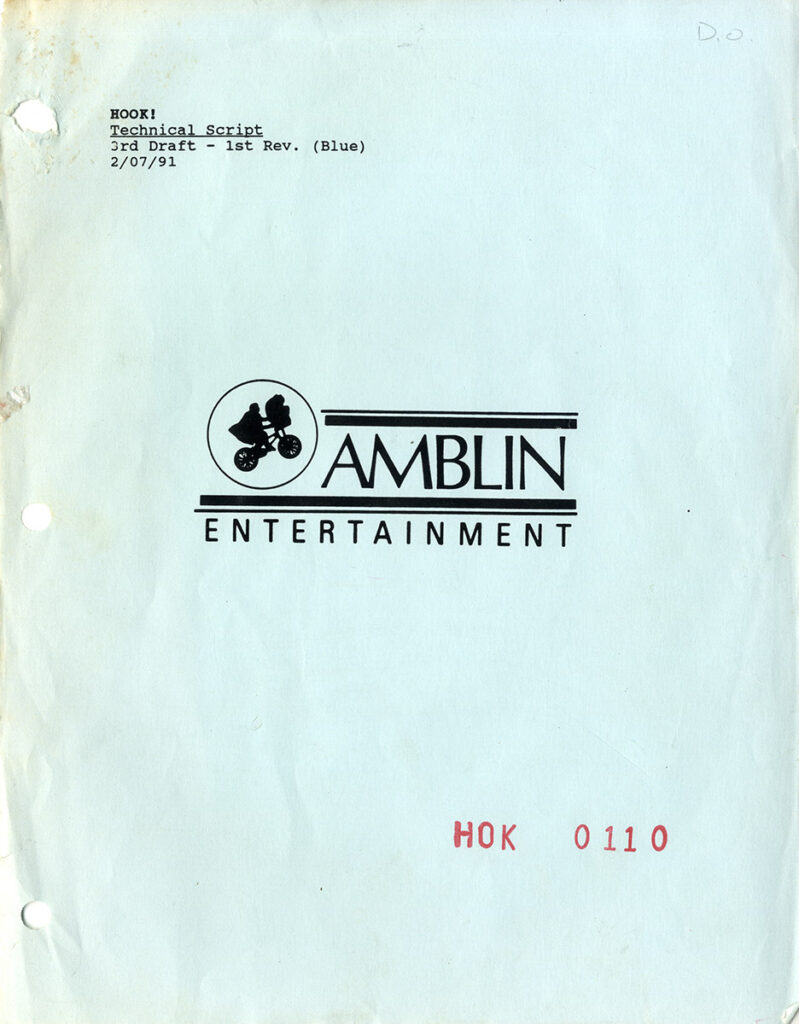 One of Steven Spielberg’s most controversial films, one that divided critics and audiences alike, HOOK was also one of Spielberg’s most personal movies, with a screenplay credited to Jim V. Hart, Malia Scotch Marmo, and Nick Castle that is extraordinarily rich in ideas. The film was released in 1991, one year before two of Spielberg’s greatest commercial and artistic successes, JURASSIC PARK and SCHINDLER’S LIST.

Though presented in the form of a fantasy adventure/fairytale inspired by the novels and plays of James M. Barrie, HOOK deals with some of Spielberg’s most profound obsessions–children in peril, the dissolution of the family, and the gulf between childhood and becoming an adult.

Spielberg began developing the project in the early 1980s as a musical with Michael Jackson in the lead, but Jackson was not interested in Spielberg’s vision of an adult Peter Pan who had forgotten his past, which led to Spielberg abandoning the project (temporarily). The first draft script was written by James V. Hart, a Texas-born novelist best known for his later screenplays, BRAM STOKER’S DRACULA, MARY SHELLEY’S FRANKENSTEIN, and the Robert Zemeckis sci-fi epic, CONTACT. The project then went to TriStar Pictures with Nick Castle (THE LAST STARFIGHTER) directing, and Robin Williams and Dustin Hoffman attached, but Williams and Hoffman had creative differences with Castle, so TriStar brought back Spielberg to direct, who then reworked the screenplay with Hart and Malia Scotch Marmo (ONCE AROUND).

The Hart/Marmo 3rd draft technical script begins with Jack Banning (the grown-up Peter Pan) watching a children’s theatrical performance of Barrie’s “Peter Pan and Wendy” in which Maggie, his 7-year-old daughter, is the star. Indeed, HOOK is not simply a retelling of Barrie’s classic story, but a meta-commentary on that story. Among the screenplay’s interesting ideas:

The entire film turns on one suspenseful issue–when will this sad adult, Peter Banning, recover his lost memory and become once again the Peter Pan we know and love?

The completed HOOK film is a revised and polished version of The Hart/Marmo 3rd draft technical script, with some dialogue and elements omitted, and other elements added. Both the 3rd draft and the film begin with Peter disappointingly failing to attend his son Jack’s baseball game, however, in the film, Peter compounds his son’s humiliation by sending an assistant with a camcorder to videotape the game.

In both the screenplay and the movie, Peter attends and introduces a testimonial dinner honoring Grandma Wendy for her work with orphans, however, in the movie Peter begins his introductory speech with a number of self-deprecating lawyer jokes. A scene of adult Peter getting drunk after his children are abducted is omitted from the film. Another significant omission from the film is a scene briefly described in this screenplay showing Hook’s prison where he keeps the Lost Boys he has kidnapped and intends to enslave. It might have been too similar to the scenes of child enslavement in Spielberg’s INDIANA JONES AND THE TEMPLE OF DOOM, for which the director had been roundly criticized.

Interestingly, for a film aimed at children, the character of Hook’s devoted First Mate, Smee (Bob Hoskins), is discreetly coded as gay–even moreso in this screenplay than he is in the film. In the screenplay, but not in the film, there is a scene where Smee pointedly fixes Hook’s unbuttoned fly, and another scene where Smee undresses Hook and then puts on Hook’s clothes himself. The movie does retain the scene where Smee lovingly introduces Hook as, “A man so deep, he’s nearly unfathomable. And so quick, he’s even fast asleep.”

The HOOK screenplay omits the politically incorrect Indians that appeared in earlier versions of the story, but adds “Painted Women” for the Pirates to consort with. Looked at in the context of his most recent work, e.g., THE FABELMANS, Spielberg’s HOOK appears more personal than ever.