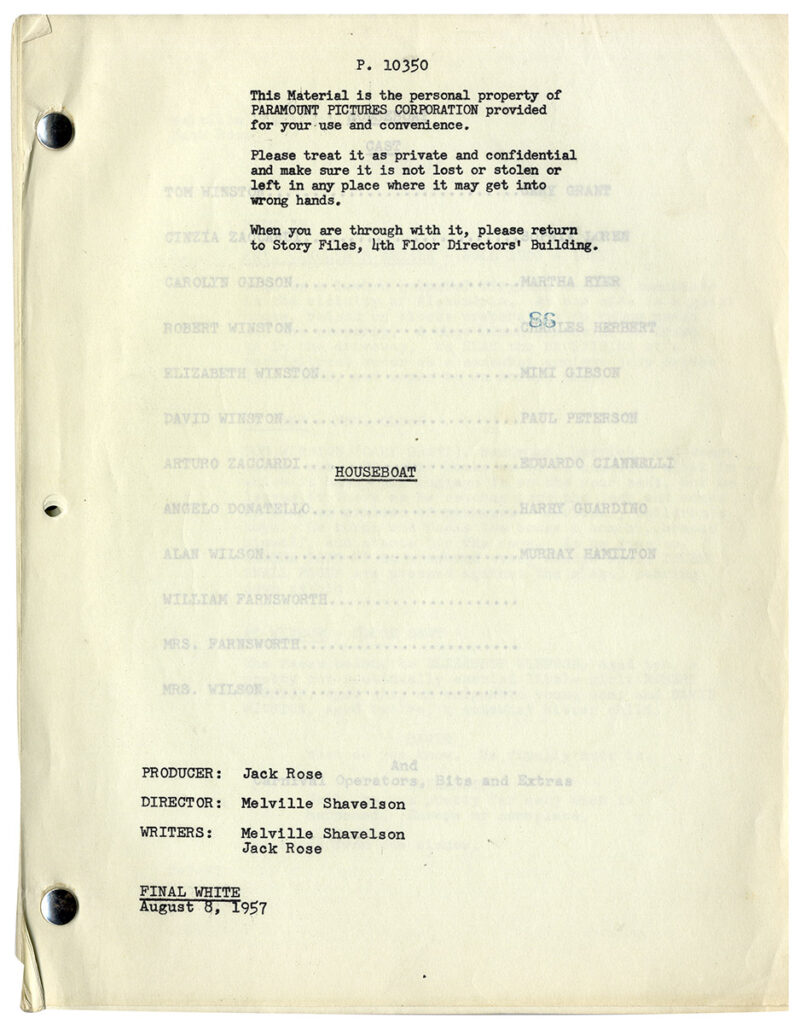 HOUSEBOAT was international sex symbol Sophia Loren’s seventh English-language movie, and the second (after THE PRIDE AND THE PASSION) in which she co-starred with Cary Grant. Remarkably though, it was the first time Hollywood cast her in a romantic comedy.

HOUSEBOAT’s Academy Award-nominated original screenplay was by producer Jack Rose and director Melville Shavelson. Both were experienced screenwriters. Rose’s previous screenplays included two Bob Hope films, THE ROAD TO RIO (1943), and THE SEVEN LITTLE FOYS (1955), which he co-wrote with director Shavelson. The prolific Melville Shavelson (1917-2007) was the writer and director of BEAU JAMES (1957), THE FIVE PENNIES (1959), IT STARTED IN NAPLES (1960), ON THE DOUBLE (1961), THE PIGEON THAT TOOK ROME (1962), A NEW KIND OF LOVE (1963), CAST A GIANT SHADOW (1966), and YOURS, MINE AND OURS (1968). The latter film — like HOUSEBOAT — was a romantic comedy about a couple (Henry Fonda and Lucille Ball) dealing with a brood of kids. Jack Rose, working independently from Shavelson, received another Academy Award nomination for his 1973 screenplay, A TOUCH OF CLASS.

The three children in HOUSEBOAT belong to a recently widowed Washington D.C. lawyer named Tom Winston (Cary Grant) — renamed Tom Winters in the completed film. When the youngest child, a boy, gets separated from his father and siblings at an outdoor classical music concert, he meets and is brought home by the conductor’s daughter, Cinzia (Sophia Loren). Unaware of her wealthy background and observing how well Cinzia gets along with the children, Tom offers her a job as the family maid. She accepts. Comic misadventures ensue when the only place Tom can find for the family to live is the titular houseboat.

The story’s subtext, not heavily stressed, is class and ethnic prejudice. Without knowing any better, and based solely on her accent, Tom assumes that Cinzia is a poor immigrant who just got off the boat. He believes he is doing her a big favor by offering her the maid/housekeeper job. She, in turn, accepts the job because she wants to get to know “real Americans.”

It is also assumed that Tom will now remarry his late wife’s affluent sister, Carolyn (Martha Hyer). However, with two actors as attractive as Grant and Loren playing the leads, the audience knows Tom and Cinzia will eventually fall in love, and Cinzia will become the children’s new mother. Interestingly, though it relies heavily on the conventions of romantic comedy, some of the HOUSEBOAT screenplay’s visual gags date back to Buster Keaton silent comedies like THE BOAT and ONE WEEK.

There are few significant differences between this screenplay draft and the completed film apart from the deletion of some dialogue and some parts of some scenes. For example, in the long sequence where Cinzia, having run away from her father and his concert, joins with young Robert, and the two runaways stroll through a carnival, the movie omits a brief interlude where Cinzia meets a young man and dances with him. One major change — a scene in which Tom and the Italian who owns the houseboat (Harry Guardino) fight over Cinzia has been deleted from the narrative.

Screenwriters Shavelson and Rose, both of whom had worked previously for Bob Hope, have no trouble writings lines tailored to the personalities of Loren and Grant. Consider the following exchange which is funniest if you imagine Loren and Grant speaking it.

CINZIA
(To Tom, referring to the boy Robert):
I tried all night to find out your address — He did not wish to come home at all! You must have done something terrible to him.

TOM
Yes — I took him to a concert.

Knowing who was cast, it is virtually impossible to read this screenplay without mentally hearing the voices of Loren and Grant speaking the lines written for them.

The HOUSEBOAT screenplay has a little bit of everything: slapstick comedy, some good one-liners, romance, implicit sex, a song for Loren to sing, great clothes (which are described in the screenplay), and a climactic wedding with fireworks — all the better to show off the movie’s Technicolor and VistaVision. HOUSEBOAT is the kind of project that was once a Hollywood specialty, a comedy that children could enjoy with just enough adult content to keep the grownups entertained.