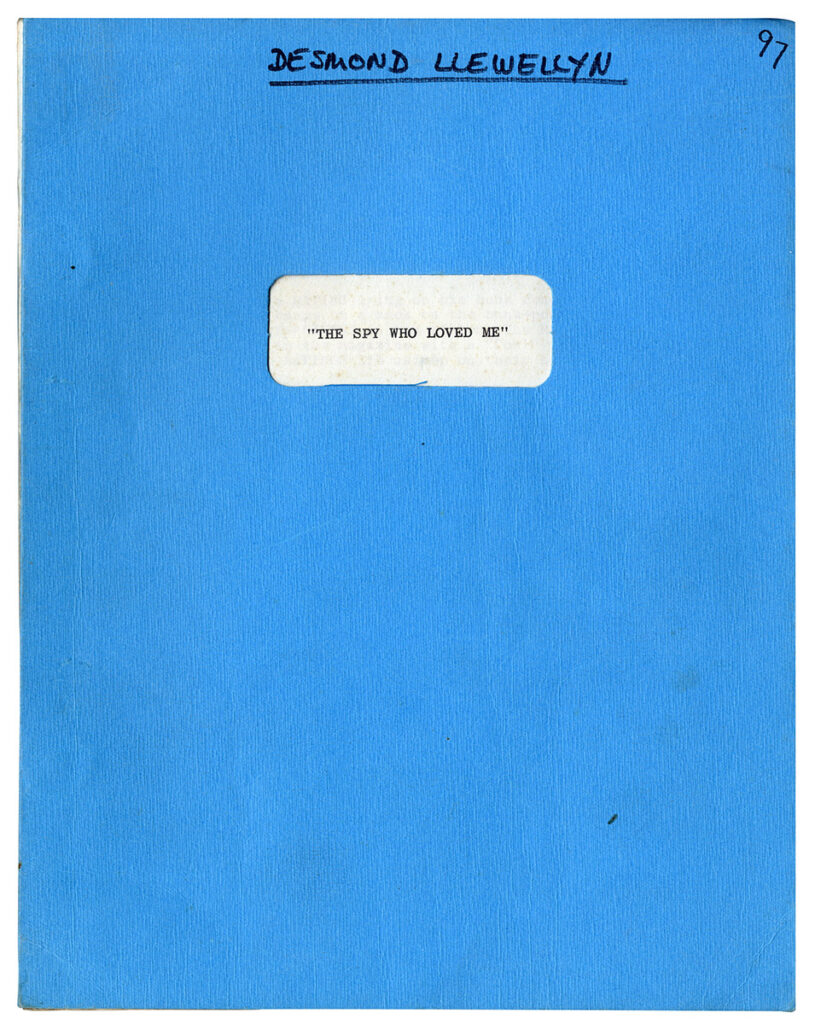 Desmond Llewellyn’s script for this James Bond film. He is remembered for having played the role of “Q” in 17 James Bond films between 1963 and 1999. The title page notes this as a “Revised Final Shooting Script”, and dated August 23, 1976. Script is sold with a letter of provenance from Claire Llewelyn, the actor’s daughter-in-law.

Directed by Lewis Gilbert (ALFIE, YOU ONLY LIVE TWICE), THE SPY WHO LOVED ME was the tenth film in the James Bond franchise produced by Albert Broccoli, and the third in the series to star Roger Moore as secret agent James Bond. It was the most financially successful of the Bond films produced to date, and is generally considered to be the finest of the seven films that starred Moore as Bond.

THE SPY WHO LOVED ME is not based on the Ian Fleming Bond novel of the same name. Rather, it is an original story using Fleming’s Bond character. The screenplay is credited onscreen to novelist Christopher Wood and producer/veteran Bond film writer Richard Maibaum (DR. NO, FROM RUSSIA WITH LOVE, GOLDFINGER, etc.) with an uncredited rewrite by Tom Mankiewicz (SUPERMAN: THE MOVIE). Prior drafts were written by Stirling Silliphant, John Landis, Ronald Hardy, Anthony Burgess, Cary Bates, Derek Marlowe, and Gerry Anderson, although little or nothing of their work was actually used.

The screen story is especially noteworthy on two counts. First, Bond’s love interest is a female Russian agent, Anya Amasova (played by Barbara Bach), who is Bond’s equal in skill and intelligence, and who outsmarts him on at least one occasion. Second, it introduces the deadly henchman, Jaws (played by Richard Kiel), a giant with steel teeth. Released one year after Spielberg’s phenomenally successful JAWS, the Bond film refers to it in several ways, not only the henchman Jaws, but also the movie’s chief villain Karl Stromberg (Curt Jürgens) who has a pool full of deadly sharks. Richard Kiel’s Jaws character made such a popular impression that the producers brought him back for the next film in the series, MOONRAKER (Lewis Gilbert, 1979).

The shooting script and the film (which follows it quite closely) begin with a series of parallel scenes. First, a British submarine is “abducted”, causing concern at the British High Command. Then, a Soviet submarine is “abducted”, causing concern at the Soviet High Command. The Soviets send an alert to Agent Triple X, Anya Amasova, whom we first see in bed in Austria with a handsome young man. Then the British send an alert to their Agent 007, James Bond, whom we first see in bed in Austria with an attractive young woman. This leads to the story’s first big action sequence, a downhill ski chase in Austria with Bond being pursued by enemy agents. He kills several of his pursuers, including one who turns out to be the boyfriend of Anya, setting up a motive for her to kill Bond after their joint mission–the main part of the film–to find and eliminate the abductor of the submarines is completed. Will she or won’t she?

The only differences between the shooting script and the completed film are minimal. Significantly, almost none of the clever dialogue written for our two main spy characters is changed. Some scenes have been reordered. In the screenplay, Bond’s first scene in Egypt comes before the first scene introducing the villains, Stromberg and Jaws. In the movie it comes afterwards. In Stromberg’s first scene, he banters with the two scientists who created the system he uses to track submarines and pays them for their services before they leave his underwater headquarters via helicopter. The movie adds a coda, not in the screenplay, where he pushes a button that blows up the scientists’ helicopter.

The final fight between Bond and Jaws is more elaborate in the film than in the shooting script. In the film, but not in the script, Bond fires a gun at Jaws and the bullet ricochets off his steel teeth. Then Bond uses a giant electromagnet to lift Jaws by his teeth and dump him in the shark tank. Then Jaws uses his teeth and strength to vanquish the shark!

By 1977, the Bond film formula was firmly established, and the Wood/Maibaum shooting script for THE SPY WHO LOVED ME hits all the expected beats. There are beautiful women, exotic locations, car chases, boat chases, helicopter chases, fistfights, gunfights, fancy gadgets, a villain who wants to conquer the world, and a technologically elaborate villain’s lair. The added elements–the Soviet agent love interest, and the monstrous henchman Jaws–are what distinguish THE SPY WHO LOVED ME from the other Bond films of this era and what make it one of the very best of the post-Connery, pre-Craig Bonds.