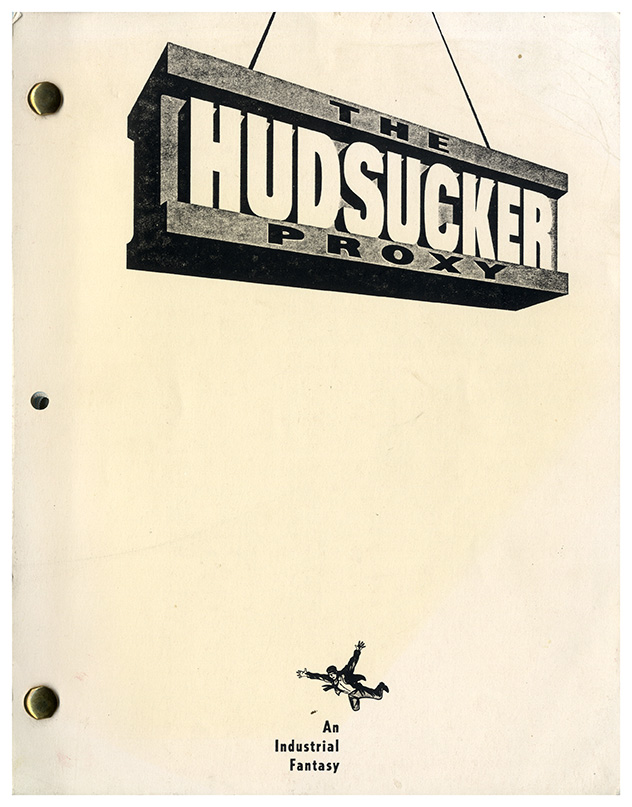 The Coen Brothers began writing THE HUDSUCKER PROXY, AN INDUSTRIAL FANTASY (as it is referred to on the cover page) with co-writer Sam Raimi shortly after Joel Coen met Raimi while working as an assistant editor on Raimi’s THE EVIL DEAD (1981). The three of them continued to work on the screenplay through the post-production of the Coen’s’ first feature, BLOOD SIMPLE (1985), dusting off and revising the completed 1985 screenplay shortly after the release of the Coen’s’ BARTON FINK in 1991. Although THE HUDSUCKER PROXY was, in fact, the Coen’s’ fifth feature, it was the first to be made with “big stars” (Tim Robbins, Paul Newman, and Jennifer Jason Leigh).

Set in the late 1950s, THE HUDSUCKER PROXY intentionally hearkens back to movies of the past, particularly the screwball comedies of the 1930s. The Coen Brothers cited Frank Capra and Preston Sturges as influences, and the screenplay specifically recalls Capra’s MR. DEEDS GOES TO TOWN (1936) and MEET JOHN DOE (1941), both of which, like this film, featured naïve small-town protagonists, played in both films by Gary Cooper, who suddenly found themselves in positions of prominence in the Big City, i.e., New York, and both of which, like this film, had fast-talking girl reporters as their leading ladies, played respectively by Jean Arthur and Barbara Stanwyck, who at first make fun of the protagonist and then fall in love with his basic decency. In THE HUDSUCKER PROXY, the naïve small-town protagonist, Norville Barnes, is played by Tim Robbins. The fast-talking girl reporter, Amy Archer, is played by Jennifer Jason Leigh who, instead of imitating Jean Arthur or Barbara Stanwyck, does a vocal impression of Katherine Hepburn.

Another major influence, not openly acknowledged by the Coens, is Jerry Lewis’s THE PATSY (1964), in which a cabal of sinister executive types led by Everett Sloane select and groom an ordinary schmuck (Lewis) to take the place of their deceased cash cow. Paul Newman’s character in THE HUDSUCKER PROXY, executive Sidney J. Mussburger, is very much like Everett Sloane’s character in the Lewis film, and a sequence in which Norville sets Mussburger’s wastebasket on fire, unsuccessfully attempts to put it out with a giant water bottle, and ends up hopping about with his foot caught in the wastebasket while causing general chaos, seems like an overt homage to some of Jerry Lewis’s slapstick sequences. Finally, there is the movie’s striking Art Deco production design (by Dennis Gassner) which not only references real New York structures like the Chrysler Building and Radio City Music Hall, but also Art Deco and Futurism-influenced films of the 1920s and 1930s, in particular, Fritz Lang’s 1926 METROPOLIS. Others might be reminded of another satirical story about a little man enmeshed in a retro-Futurist bureaucracy, Terry Gilliam’s BRAZIL (1985).

Not only is the film’s look intended to be retro, in the screenplay the characters also talk in a kind of retro patois — “Say, what gives?” “That gag’s got whiskers on it.” “And that’s just the potatoes, Smitty, here comes the gravy…”

The screenplay is also rich in connected visual imagery, mostly variations on the theme of the circle — the clock on top of the Hudsucker Building about to strike midnight in the movie’s opening sequence, the giant gears that work the clock behind the scenes, Norville’s conversation with Amy concerning the Wheel of Karma, and Norville’s two circular inventions, the Hula Hoop and, later, the Frisbee.

With a tightly structured Coen screenplay (at least this screenplay), what you see on the page is pretty much what you get on screen. What few changes were made between this script and the completed film are comparatively minor in nature. For example, in the scene where Norville first takes Amy up to his executive office, there is a scripted sight gag where Norville’s backside pushes against the door on which his name and title have just been painted, leaving a reverse image of his name and title on his pants, which he then transfers to the sofa on which he sits. That gag is omitted from the completed film. Likewise, in the scripted version of this scene, Norville and Amy’s conversation is briefly interrupted by the elevator boy bringing them liquor. In the film, their conversation plays uninterrupted.

One thing that takes this screenplay out of the realm of Capra/Sturges screwball and into the realm of Coen Brothers modernism is its moments of magical realism — most strikingly when Amy ventures into the giant gear room behind the Hudsucker Clock — behind the scenes of reality, as it were — and meets God (not overtly identified as such) in the form of an old black janitor named Moses who tends the gears of the clock, and appears to know everything about everybody, including every character’s past and future. At the film’s conclusion, after Norville has jumped from the top of the building, Moses saves him by jamming a broomstick into gears of the clock — literally stopping time. “Strictly speakin’ I’m never spoze to do this,” he says, “but have you got a better idea?”

One notable difference between this screenplay and the completed film is how the film’s titles were handled. At the beginning of the screenplay, when Chief Executive Waring Hudsucker (Charles Durning) jumps off the top of the Hudsucker Building, the screenplay indicates that the image will freeze at various points on his way down so that the film’s title credits can be superimposed. The completed film abandons this concept, very likely because Jerry Lewis had done exactly the same thing in the opening title sequence of THE PATSY, discussed above.

Of some historical interest, that central image of the man falling from a skyscraper — the “Falling Man” — is an archetype in the classic Jungian sense that became increasingly prominent in our culture after 9/11. (See also, the titles of AMC’s acclaimed TV series, MAD MEN, and Errol Morris’s 2017 meta-documentary, WORMWOOD.)

Coen Brothers scripts are exceedingly scarce. This is only the second time that I have handled one.