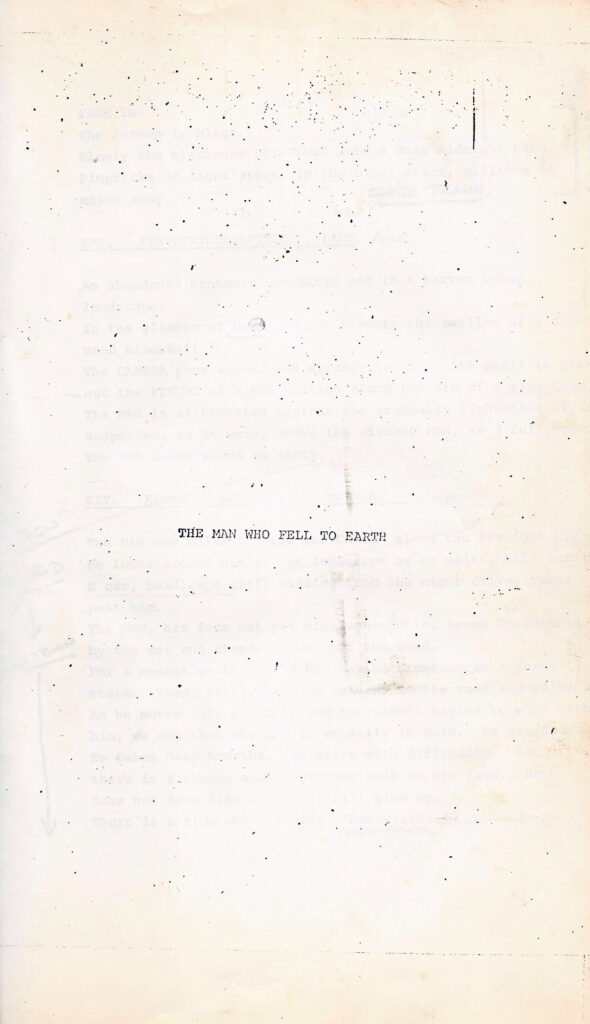 London: British Lion Film, 1976. Draft script for the 1976 film. Copy belonging to set decorator, Simon Wakefield, with his name in holograph ink on the page preceding the title page and his notations in holograph ink throughout. Title page present. 118 leaves, with last leaf of text numbered 117. Pages NEAR FINE, boards NEAR FINE, housed in a green spring binder.

David Bowie’s one major film, which he starred in at the height of his career, and one in which the character he portrayed (a mysterious space alien) played off his shape- shifting stage persona.

The Man Who Fell to Earth, now viewed as one of the seminal science fiction films of the 1970s, is one of the few films from that era that successfully transplanted a rock musician to a new context (though certainly Bowie had been camera-ready for most of his career). Director Nicolas Roeg managed to take the relatively straightforward novel by Walter Tevis and impose a wide array of new political and philosophical subtexts, effectively making the film more similar than anything else to Heinlein’s Stranger in a Strange Land, wherein an alien from another planet comes to earth with a specific mission, only to be overwhelmed with unexpected obstacles and distractions.

In Roeg’s interpretation, Bowie arrives on earth determined to bring water to his dying home planet, only to become addicted to alcohol and television, and ultimately remains trapped due to his own limitations and the efforts of a paranoid government to prevent his return. (Weldon 1983. Criterion Collection 304)