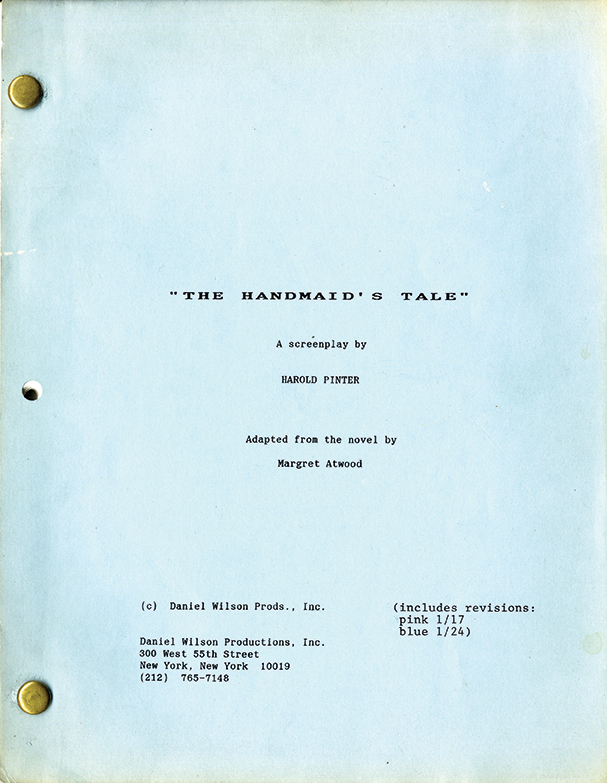 This film, directed by Volker Schlöndorff (THE LOST HONOR OF KATHARINA BLUM, THE TIN DRUM), taking over from original director Karel Reisz (ISADORA), is of principal interest today due to its exceptional cast — Natasha Richardson as Offred, Robert Duvall as the Commander, Faye Dunaway as his wife Serena, and Elizabeth McGovern as the lesbian Moira — and because its screenplay is credited to Nobel Prize-winning playwright and screenwriter, Harold Pinter. Pinter had previously collaborated with director Reisz on their 1981 adaptation of John Fowles’ THE FRENCH LIEUTENANT’S WOMAN.

“[T]he final cut of The Handmaid’s Tale is less a result of Pinter’s script than any of his other films. He contributed only part of the screenplay: reportedly he ‘abandoned writing the screenplay from exhaustion.’ …Although he tried to have his name removed from the credits because he was so displeased with the movie (in 1994 he told me that this was due to the great divergences from his script that occur in the movie) …his name remains as screenwriter.”

The completed film does not represent Pinter’s (or Reisz’s) original vision. When Schlöndorff took over the film’s direction and requested rewrites, Pinter suggested he enlist the original author (Atwood) and she, among several other people, were responsible for the final shooting script, which Pinter referred to as a “hotchpotch”. Thus, this original Harold Pinter screenplay draft — never published —  is of tremendous value to scholars or fans of Pinter and his work.

Offred and Ofglen walking. Various women with shopping baskets.
The arcade echoes with their footsteps. Most of the shops are shut.
Some “craft” shops and food stores are open.

Pinter’s screenplay begins in the “Handmaid’s Center”, specifically a gymnasium at night:

VOICES
(from bed to bed)

Aside from rearranging the order of scenes, Schlöndorff and Atwood’s rewritten film version adds dialogue and actions to Pinter’s scenes, while omitting some of his dialogue and entire sequences. For example, the scene in which Ofglen (another Handmaid) first informs Offred that there is an underground Resistance to the Gilead tyranny — while both of them are looking at automated machines that “endlessly print roll upon roll of prayers” — has been omitted. Likewise, the movie omits a scene in which a fleeing Offred, her husband and their little girl have to abandon the family cat.