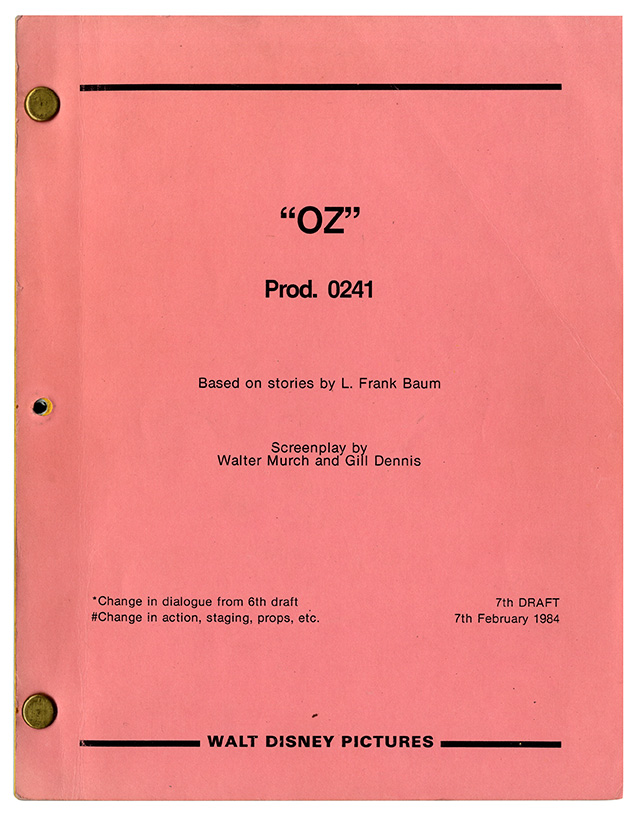 Vintage original film script, printed wrappers, brad bound, quarto, printed on four different colors of paper, with dates as late as 7-2-84. Slight creasing to covers, FINE in NEAR FINE wrappers. Front wrapper bears the title “OZ,” but the final title, RETURN TO OZ, is on the title page.

“The tornado was six months ago and Dorothy’s not been herself since.”

MGM’s classic THE WIZARD OF OZ (1939) was based on L. Frank Baum’s 1900 novel, The Wonderful Wizard of Oz, the first in a series of fourteen immensely popular Oz books authored by Baum. Walter Murch’s RETURN TO OZ (1985) is a true sequel, based mainly on the second and third books in Baum’s Oz series, The Marvelous Land of Oz aka The Land of Oz (1904), and Ozma of Oz (1907). Though Walt Disney Pictures, who produced the film, owned the rights to these books, they had to pay a special fee to MGM for use of the famous ruby slippers, a concept borrowed from the MGM film. (In the books, the slippers were silver.)

RETURN TO OZ (or simply OZ, as this screenplay draft is titled) was the first film written and directed by Walter Murch (born July 12, 1943), the Academy Award-winning sound and image editor who worked on AMERICAN GRAFFITI, THE GODFATHER trilogy, THE CONVERSATION, APOCALYPSE NOW, GHOST, THE ENGLISH PATIENT, the “director’s cut” of Welles’s TOUCH OF EVIL, and numerous other projects. Gill Dennis, who collaborated with Murch on the OZ screenplay, is best known for co-writing the 2005 film WALK THE LINE, which starred Joaquin Phoenix as Johnny Cash.

Given that writer/director Murch is one of the most respected artist/technicians in the film business, it comes as no surprise that RETURN TO OZ is thoroughly successful on a craft level — the production design and cinematography are excellent. Yet the movie inspired split reactions. Fans of the MGM musical were put off by the Murch film’s comparatively dark and melancholic tone. There are no light-hearted musical numbers in this film. Chicago Reader critic Dave Kehr, echoing the feelings of many viewers, wrote, “It’s bleak, creepy, and occasionally terrifying.” It begins with a scene in which little Dorothy (played by an appropriately 10-year-old Fairuza Balk) is threatened with electro-shock therapy by the avuncular Dr. Worley (Nicol Williamson) as a cure for her “fantasies,” and the movie never quite recovers from this disturbing sequence. Yet fans of the original Oz books found much to love in this version, which is much closer in look and tone to Baum’s vision than the MGM film. Indeed, RETURN TO OZ’s character designs are based directly on John O’Neill’s illustrations for the Baum books. As a result, it has become something of a cult film.

The new characters, imported to Murch’s film from Baum’s book sequels and based on O’Neill’s character designs, include: