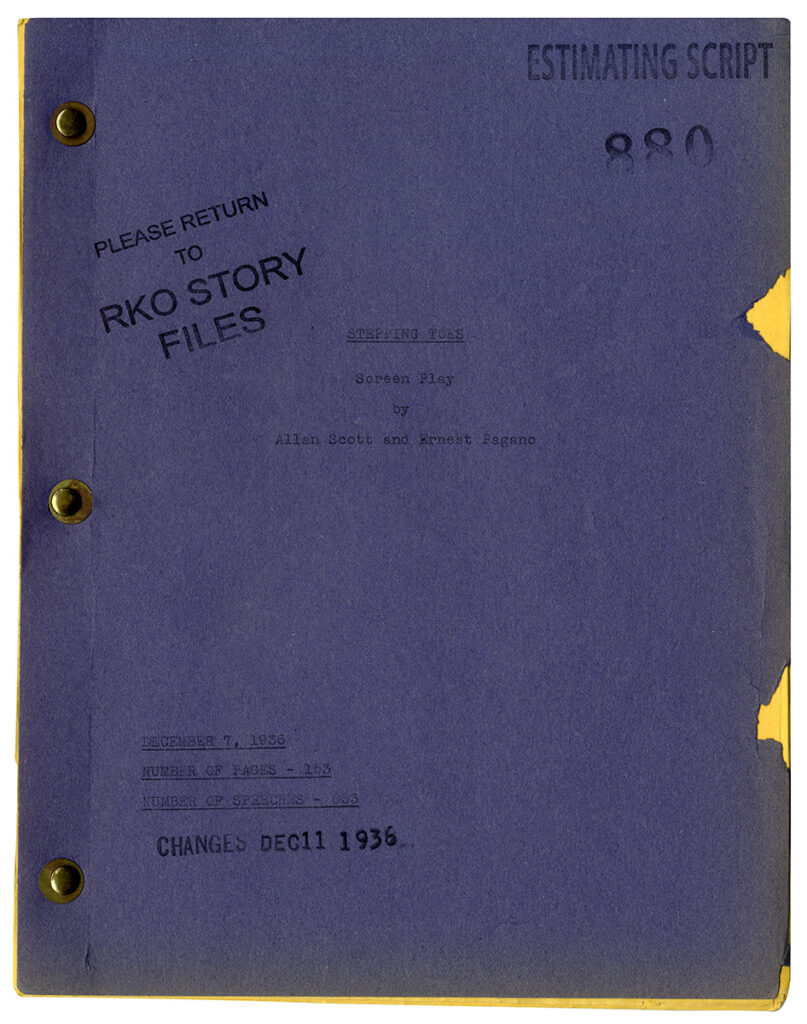 SHALL WE DANCE (1937) was Fred Astaire’s eighth motion picture and the seventh in which he co-starred with dance partner, Ginger Rogers. Even more significantly, musically speaking, the film had an original score by George Gershwin, the last major work completed by the great composer before his untimely death that same year. It was the fifth of six Astaire/Rogers films directed by Mark Sandrich (born Mark Rex Goldstein in 1900, died 1945). The title that appears on this 1936 shooting script is STEPPING TOES, but RKO ultimately released the movie as SHALL WE DANCE, a title suggested by stage and film director Vincente Minnelli, who was a friend of George and Ira Gershwin.

Scott’s co-scripter on SHALL WE DANCE, Ernest Pagano (1901-1953), had previously adapted Buster Keaton’s last silent feature, SPITE MARRIAGE (Keaton and Edward Sedgwick, 1929), went on to co-write one other Astaire/Rogers musical, CAREFREE (1938), and helped script the Astaire vehicles, A DAMSEL IN DISTRESS (Stevens, 1937), YOU’LL NEVER GET RICH (Sidney Lanfield, 1941) and YOU WERE NEVER LOVELIER (William Seiter, 1942).

By the time of SHALL WE DANCE, the formula for an Astaire/Rogers musical had been well-established. The couple meet, get off to a bad start due to a misunderstanding of one kind or another, ultimately transcend their problems by dancing together, and go on to live happily ever after.

In the case of SHALL WE DANCE, Fred is Pete Peters, an American in Paris posing with great success as a Russian ballet dancer named Petrov. He falls in love with Ginger’s character, an American tap dancing star named Linda Keene, when he sees her picture in a photo flipbook. Unable to get anywhere with her in Paris, and learning she is about to travel from Paris to New York via ocean liner, he books a ticket to New York for himself on the same voyage. In the meantime, Petrov’s bumbling manager (Edward Everett Horton), trying to extricate Petrov from another romantic entanglement, starts a rumor that Petrov and Linda Keene are married. Linda and Petrov, who were actually beginning to fall for each other, are perturbed by all the tabloid publicity surrounding their “marriage,” and Linda almost marries someone else, deciding the best way to end the non-existent marriage to Petrov is to actually marry him and then divorce him. Inevitably, after even more complications, Linda and Petrov reconcile–during the film’s climactic dance number on a New York stage!–and the Linda/Petrov marriage becomes genuine.

The fact that Petrov is a ballet dancer and Linda a tap dancer provides an excuse for several dance numbers that combine the two forms. (Fred collaborated on the choreography with Hermes Pan.) Fred’s first big dance number, “Slap That Bass,” finds him jazz-dancing in the ocean liner’s engine room backed by an all-Black ensemble of ship workers. The classic George and Ira Gershwin songs performed by Fred and Ginger during the film include “They All Laughed (at Christopher Columbus),” “Shall We Dance,” “Let’s Call the Whole Thing Off,” and “They Can’t Take That Away From Me.”

As all the song lyrics are printed out in the screenplay, a reader will note that Fred’s first song “Hi-ho! Ho-hi!” sung while walking down the street to meet Ginger for the first time, was cut from the completed film. In fact, a fair amount of dialogue and business was trimmed from this 155-page script (e.g., a scene in a stalled elevator). And there are other noticeable changes. The role of Ginger’s manager, which the screenplay indicates was to be played by Adolph Menjou, is played in the film by Jerome Cowan. Ginger’s chambermaid, named Della in the screenplay, is renamed Tai in the film because an Asian was cast in the role. The last song written out in the screenplay, “Wake Up, Brother, and Dance!” was replaced by the titular song, “Shall We Dance.”

Aside from the wisecracks of Fred and Ginger, most of the film’s laughs come from Edward Everett Horton playing Fred’s manager, Jeffrey Baird, like many of the characters Horton played in ’30s films, a fussy queen; and his laughs come not from telling jokes but from being the butt of jokes. Horton was a master of reaction shots and double-takes. For example, in Paris, when a French boy is rude to him, Jeffrey (Horton) asks a doorman, “What does that mean in French?” and the doorman replies, “The same as it does in English, m’sieu,” cueing one of Horton’s patented double-takes.

SHALL WE DANCE is an outstanding entry in the Astaire/Rogers canon, not only for its dancing, set design,+ and magnificent Gershwin score, but for its verbal humor. If one reads this script while mentally hearing the distinctive voices of the comic principals–Astaire, Rogers, Edward Everett Horton, Eric Blore, et al.–speaking their lines, it is a screenplay that reads almost as funny as it plays.